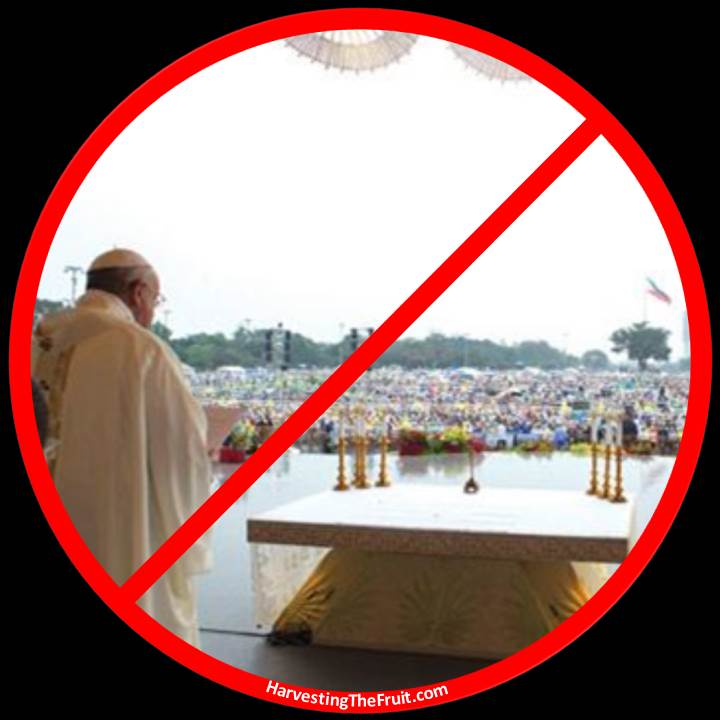 There has been a great deal of outrage expressed, and rightly so, over the manner in which the Blessed Sacrament was distributed at the Papal Mass in Manila yesterday.

As shown in the video below, the sacred Host, after initially being placed in the hands of people on the outside edge of the densely packed crowd by a priest, was then passed along from person to person.

Eventually, as the number of consecrated Hosts presumably began to dwindle, people can be seen in the video passing fragments of the Host to one another.

Scandals of this nature, wherein the sacred Host is treated profanely, aren’t all that unusual at large outdoor celebrations of Holy Mass. The use of disposable plastic cups as ciboria at World Youth Day in Rio comes to mind. (See Catholic Family News.)

News outlets are reporting that some six million people were present for the Papal Mass in Manila, causing many to wonder just how, logistically speaking, the distribution of Holy Communion should take place in such circumstances.

The answer is simple; it shouldn’t.

Is that to say that no attempt should have been made to distribute Communion to the millions of people clambering for the Eucharist yesterday; sending them away having not received?

Certainly that would have been better than what actually did take place.

Even so, how best to handle the distribution of Holy Communion in such cases is the wrong question to ask; what we really need to consider is whether or not such Masses should be celebrated in the first place.

Again, the answer is simple; they shouldn’t.

While the mega papal liturgies drawing hundreds of thousands, and even millions, of faithful have become somewhat commonplace in recent decades, they’re not only entirely unnecessary; they actually cause great harm even beyond the obvious.

By obscuring the reality of what the Mass is; its purpose, and its benefits.

Look, it is perfectly understandable for Catholics to desire to be in the presence of the Successor of St. Peter, to lays eyes upon him and to hear him speak in person.

That said, Holy Mass celebrated by the pope, while perhaps an occasion of noteworthy solemnity (even though the sacred signs all-too-often say otherwise), is of no more “value” than the Mass that is offered by the local parish priest.

For instance, the celebration of the Usus Antiquior that was celebrated at St. Alphonsus in Baltimore yesterday where I had the great privilege of assisting was head and shoulders of more benefit than that spectacle in Manila. For the present discussion, however, we’ll largely set aside the great disparity between the benefits derived from the traditional Mass versus the Novus Ordo.

That having been said…

In all cases, Jesus Christ is the true high Priest of the Mass; it is He who makes the offering, and it is He who is the propitiatory Sacrifice that is offered to the Father in reparation for our sins. This is the case whether it’s the pope or Fr. Joe at the altar.

This is a truth lost on many in our day, and it’s not a mystery why.

The Novus Ordo Missae as it is commonly celebrated (even by the popes) is such that the personal attributes of the celebrant have a tremendous impact on the faithful; their experience of the Mass and the manner of believing derived therefrom.

For example, if Father is reverent and pious, the Mass is experienced in one way; if he is lackluster and casual; the experience is altogether different.

In other words, the Novus Ordo, with the priest’s nearly every word spoken aloud, almost always while facing the people, his every gesture on display, is inherently performance driven.

Add to this the fact that the Bishop of Rome, from the time of John Paul II on forward, has been viewed (and all-too-pleased to behave) more like a Holy Roman Rock Star than the Vicar of Christ, and the papal Mass has taken on the appearance of being as much dramaturgical as liturgical; even to the point of obscuring the Holy Sacrifice.

Put an end to the outdoor Papal Mega-Mass altogether.

For starters, the pope need not behave as a globetrotting religious ambassador such as we’ve grown accustomed. If he simply stayed put more often, the problem under discussion would become less relevant.

In lieu of that, if the Holy Father wishes to address the faithful of a given place at some large venue capable of accommodating hundreds of thousands or millions of people, great; gather the people, deliver an address, and impart an Apostolic blessing.

As for the liturgy; the pope should celebrate Holy Mass in a fittingly sacred place (e.g., the local cathedral, or some other church building of note), offering special intentions for the people of that nation if he so wishes.

Exactly who is invited to attend that liturgy is a matter that can be discussed, but in any event, a papal Mass with a limited number of people in a truly sacred place is clearly a move in the right direction.

Local parishes could choose to celebrate the liturgy at the same hour as the Papal Mass as an expression of solidarity with the pope, but even this would be largely superfluous. What really matters is that every celebration of Holy Mass is carried out in a truly sacred place, and under the conditions necessary to allow for reverence when distributing and receiving Holy Communion.