Home
Blog Post
Pledge allegiance to the LGBT movement, or else

“I pledge allegiance to the LGBT movement, and do so solemnly swear that I will never fail to uphold my duty to always and everywhere, in public and in private, embrace and encourage, affirm and applaud all forms of homosexual activity. I hereby further pledge to confirm and to celebrate the sacred institution of same-sex marriage, and I promise to defend even unto death the inalienable right of every human person to determine the gender identity of their own choosing. So help me.”

Are you prepared to take the oath?

If not, you may one day find yourself dragged into court, fined unto bankruptcy, and perhaps even imprisoned; all right here in God Bless America, home of the brave and land of the free.

There can be no doubt whatsoever that this is precisely where things are headed in the United States, which is precisely why we need laws like the Indiana Religious Freedom Restoration Act (RFRA).

The RFRA, in spite of whatever good its authors may intend, is an exercise in futility and destined to fail.

For Catholics, this much should be entirely obvious.

Even so, according to a statement issued by the Indiana Catholic Conference (which is “the official public policy voice of the Catholic Church in Indiana”) the state’s recently passed Religious Freedom Restoration Act is “a prudent way to ensure the religious freedom of Hoosier individuals and institutions.”

As for why the RFRA is needed, the statement said, “The government is expanding its regulatory powers to redefine and intrude into areas traditionally beyond the authority of the state.”

The Act is ostensibly intended to protect business owners and private individuals that might otherwise be forced by the government to carry out actions that are contrary to their religious convictions.

Within moments of its being signed into law, the Act was met with angry protests on the part of (who else?) LGBT activists who are deeply concerned that the RFRA may prohibit them from forcing people with moral convictions to celebrate their sexual deviancy under threat of government sanctioned legal action.

When asked by ABC’s George Stephanopoulos on Sunday if the law will allow business owners to refuse participation (i.e., providing goods or services) in same-sex “weddings,” Indiana Governor Mike Pence skirted the question.

Pence decried what he called “shameless rhetoric” on the part of the law’s opponents and their friends in the media, saying:

The question here is if there is a government action or a law that an individual believes impinges on their religious liberty, they have the opportunity to go to court, just as the Religious Freedom and Reformation Act that Bill Clinton signed allowed them, to go to court and the court would evaluate the circumstance under the standards articulated in this act.

One day later, Republican legislators in Indiana held a press conference to deny that the law is intended to allow for discrimination “against gay and lesbian Hoosiers,” and they vowed to pass legislation, if necessary, to prevent it.

The following day, Governor Mike Pence backtracked, and is now promising to “correct” the Act he signed into law just last week, adding that such a correction is needed only because of “the smear that’s been leveled” against it.

The truth is the Indiana RFRA is nothing new.

Thirty other states have similar laws in place, and what’s more, the Indiana law is practically identical to the Federal RFRA; the latter having been co-sponsored by Democrat Senator Chuck Shumer and signed into law by President Bill Clinton in 1993.

For the simple reason that it’s in the news and therefore must be leveraged in order to fan the flames of controversy in furtherance of the own careers.

As for the law itself, it simply isn’t capable of providing what its detractors fear and its supporters desire.

According to a synopsis provided by the State of Indiana, the Act:

And who exactly gets to determine what constitutes a “religion?”

It’s the same entity empowered to determine what constitutes a “compelling government interest;” the government, of course!

We’ve seen this film before, folks, and it goes something like this:

And then guess what happens?

The “government” will announce (in so many words and deeds) that it has a “compelling interest” in forcing every man, woman and child to pay homage to homosexual deviancy.

The reason this decline is inevitable, at least in the minds of authentic Catholics, is simple:

Missing entirely from all of this talk about “substantial burdens” relative to the “exercise of religion” is the only thing that can possibly define such matters; namely, the light of absolute truth.

In other words, the presumption going in is that each individual enjoys liberty in equal measure; the Catholic, the Jew, the Muslim, the homosexual activist, etc. Truth and error aren’t even part of the discussion.

According to what standard shall the civil authority regulate the situation in service to the common good?

According to the Indiana Catholic Conference, this is where the RFRA comes in, establishing what it calls “a legal standard that protects state interests as well as individuals and religious institutions.”

Nonsense; it does no such thing.

Writing in the book, Against the Heresies, Archbishop Marcel Lefebvre, using freedom of the press as an example, denounced the idea that true liberty is attainable apart from standards that are based upon a clear delineation between objective truth and error:

In the lands of “liberty,” the so-called people’s democracies, there is really the tyranny of democracy. There is no longer question of truth or error … liberty must be allowed, for if liberty is granted to all, then surely truth will triumph over error. But experience has shown the contrary: it is easier to do evil than good, it is more in conformity with the disorder in human nature. That is why, when one grants this liberty, it is error that gains. 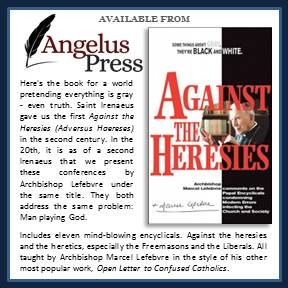 “The tyranny of democracy” is an apt description of the situation in Indiana, where good intentions are quickly caving in to the demands of the diabolical masses.

How can this happen in America?

How could it not?

There has never been any room in the Great American Experiment for the Social Reign of Christ the King, and when He isn’t “allowed” to reign, guess who will?

Pope Pius XI had it exactly right when he wrote:

When once men recognize, both in private and in public life, that Christ is King, society will at last receive the great blessings of real liberty, well-ordered discipline, peace and harmony. (Quas Primas)

Until then, you can forget about it.

Looking Towards The East… Aboard The Titanic Sailing West…