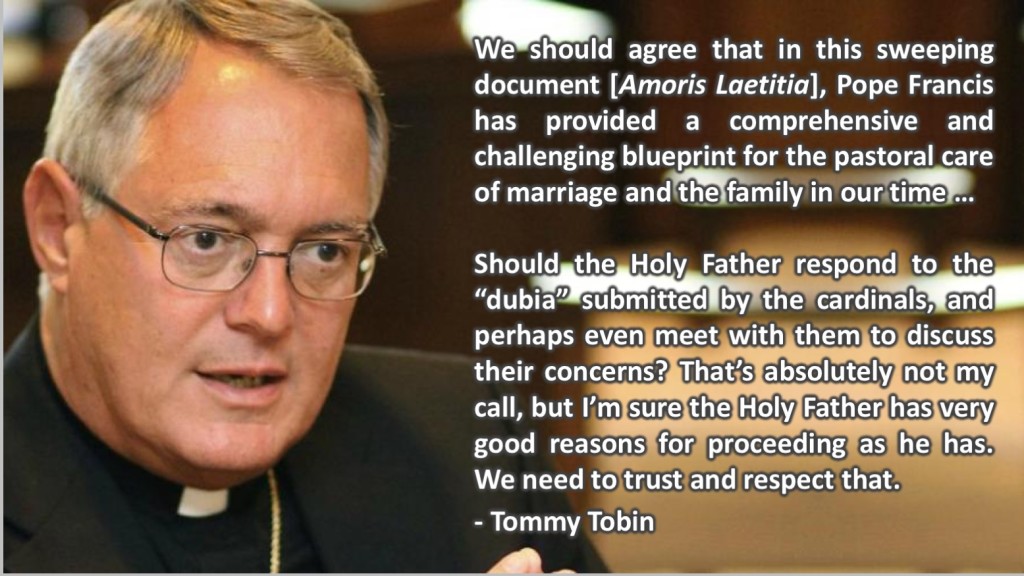 A reminder that Catholics should not support or attend LGBTQ “Pride Month” events held in June. They promote a culture and encourage activities that are contrary to Catholic faith and morals. They are especially harmful for children.

As the message spread on social media, Tobin was immediately praised for his courage by conservative Catholics and vilified as a bigoted homophobe by LBGT activists. The Boston Globe reported:

“We woke up this morning and we saw the bishop’s tweet and were honestly flabbergasted,” said Joe Lazzerini, the president of Rhode Island Pride in an interview Saturday night.

“He is like the Donald Trump of the Catholic Church, he goes on Twitter and spews out hate,” Lazzerini.

Apparently, Lazzerini failed to notice that President Trump – to his utter shame – had taken to Twitter on Friday afternoon to show his support for LGBT Pride Month – the first Republican President ever to do so.

In any case, it was my intention this morning to write a post on Tobin’s tweet; one that would begin by stating the simple fact that when a Catholic bishop issues a message such as the one Tobin tweeted on Saturday, it is no more an act of courage than a mother feeding her children; make that, her starving children.

It was also my intention to make a not-so-bold prediction; namely, that Tobin would soon issue an apology for having done what Catholic bishops do. As it is, however, the deed had already been done.

On June 2, after holding the Catholic line for a grand total of one day, the “courageous” Bishop Tobin issued the following statement:

I regret that my comments yesterday about Pride Month have turned out to be so controversial in our community, and offensive to some, especially the gay community. That certainly was not my intention, but I understand why a good number of individuals have taken offense. I also acknowledge and appreciate the widespread support I have received on this matter.

The Catholic Church has respect and love for members of the gay community, as do I. Individuals with same-sex attraction are beloved children of God and our brothers and sisters.

As a Catholic Bishop, however, my obligation before God is to lead the faithful entrusted to my care and to teach the faith, clearly and compassionately, even on very difficult and sensitive issues.  That is what I have always tried to do – on a variety of issues – and I will continue doing so as contemporary issues arise.

As the gay community gathers for a rally this evening, I hope that the event will be a safe, positive and productive experience for all. As they gather I will be praying for a rebirth of mutual understanding and respect in our very diverse community.

Before we dissect Tobin’s statements, one notes that the message of 1 June was issued via Tobin’s personal Twitter account, while the pusillanimous quasi-retraction of 2 June was published on the diocese’s official website via a statement that features the Coat of Arms of the Diocese of Providence. 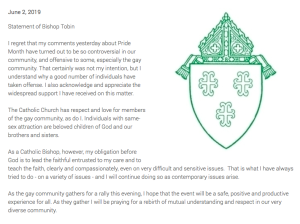 Let there be no doubt about what this signifies: The tweet of June 1 is meant to be understood as nothing more than an off-the-cuff comment from a guy named Tommy Tobin.

The June 2nd tribute to trannies and other assorted sexual deviants, on the other hand, is the official position, not just of the Diocese of Providence, but of its parent company – that is, the institution presently posing as the Holy Roman Catholic Church under the headship of His Hereticalness Jorge “Who am I to judge?” Bergoglio.

With good reason, one strongly suspects that Bishop Tobin received a message (if not an outright rebuke) from the Apostolic Nuncio to the United States, Archbishop Christophe Pierre, “convincing” him of the necessity of issuing an apology for his judgmental tweet.

Remember, folks, Archbishop Wilton Gregory – an unabashed supporter of the LGBT cause who personally invited Fr. James Martin to speak in the Archdiocese of Atlanta last October – was just installed as the Archbishop of Washington, D.C., making him one of the most influential prelates in the entire nation. It is highly unlikely that this appointment took place apart from the recommendation of Pierre, whose central role in the process of filling vacant sees is described by the USCCB as follows:

.. the apostolic nuncio plays a decisive role in the selection process. He not only gathers facts and information about potential candidates, but also interprets that information for the Congregation. Great weight is given to the nuncio’s recommendations…

I also would not be surprised if it one day comes to light that Tobin was blackmailed into issuing his apology by an individual or individuals who are intimately familiar with the kinds of skeletons that may populate his closet. As for what kinds of skeletons, I will not venture to speculate.

I would, however, point out that Tobin served as Associate General Secretary of the Diocese of Pittsburgh under then-Bishop Donald Wuerl before being promoted to Vicar General and then to General Secretary. As a reward for his good and faithful service, Tobin received episcopal consecration in 1992 from the hands of Donald Wuerl, a man whose own rise through the ecclesial ranks is inextricably tied to the influence of Uncle Ted McCarrick.

I might also remind readers that Archbishop John Nienstedt of Minneapolis-St. Paul was at one time the USCCB’s most outspoken critic of pending “same-sex marriage” legislation; only to eventually have multiple people testify under oath about his own homosexual proclivities. Just sayin…

At this, let’s take a closer look at the main points present in Tobin’s mea culpa, along with with a bit of word substitution for the sake of clarity.

I regret that my comments yesterday about Pride Month, wherein sodomy and other intrinsically evil acts will be publicly celebrated throughout the world in the plain sight of innocent children, have turned out to be so offensive to some, especially sodomites and other homosexual deviants.

The Catholic Church has respect for sodomites and other homosexual deviants, as do I.

As sodomites and other sexual deviants gather for a rally this evening, I hope that the event is a productive experience for all; even though I know damned well that it aims to produce indifference with regard to both Natural and Divine Law.

OK, first, let’s talk about this word “respect” as it is often tossed about by spineless, modernist churchmen; beginning with what it doesn’t mean. Respect does not mean the mere practice of basic civility, kindness, charity, or any such thing; it means esteem, high regard, admiration, etc.

With that in mind, let’s be perfectly clear; the Catholic Church – that is, Eternal Rome as Archbishop Lefebvre often called it – does not have respect for those who publicly celebrate sodomy and other forms of homosexual deviancy.

Rather, she and her churchmen leave no doubt whatsoever as to the degree to which such intrinsically evil behavior is to be abhorred and avoided. Eternal Rome can only pity those who dare to celebrate such repulsive acts, and moved by genuine charity, she is compelled to call such persons to repentance.

In conclusion, the big takeaway from the Tommy Tobin affair in the minds of most neo-con Catholics and even many so-called traditionalists is likely to be that the episcopate of today is fearful and weak. For me, however, the lessons are far simpler:

Men like Tommy Tobin are truly nothing more than rank imposters merely posing as Catholic, and so too is the conciliar church-of-man for which they work.

Two Pope Johns: Both wrong, only one mistaken