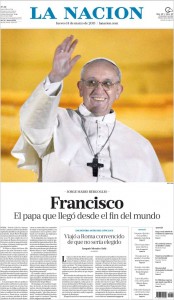 In addition to the brilliant one-liners offered in his La Nacion interview, following are some notes on the pope’s more serious comments.

OK, OK, we get it, Holy Father; that venerable practice otherwise known as the mission that Jesus Christ gave to the Church is still on hold. So noted.

– The Holy Father said with respect to opposition to his agenda:

“Resistance is now evident. And that is a good sign for me, getting the resistance out into the open, no stealthy mumbling when there is disagreement … it´s very healthy.”

This only reinforces the prediction that I made just prior to the Synod’s closing:

Pope Francis will close the Extraordinary Synod by extending words of deep gratitude to the bishops for their hard work and openness to frank dialogue. He may perhaps even make a little joke and flash a “humble” grin, but make no mistake; this is no laughing matter, neither for the pope nor for those men who stood up in opposition to his agenda of “mercy.”

Watch for the Bergoglian Retribution to unfold over the next year as his foes (read: defenders of the Catholic faith no matter how lukewarm) are duly compensated for their offense.

How he does this may not be public nor immediately obvious, and while his retributive injustice may not include every last name on his hit list, rest assured he will make examples of enough of them that the others will get the message.

– Concerning the Curia’s reform, the pope said, “You see, in pre-conclave meetings, as cardinals we have demanded lots of things which we should certainly not forsake.”

This isn’t the first time Pope Francis has indicated that he is in some sense beholden to an agenda that was set by the cardinal electors prior to the conclave. If the translation is to be trusted, the Holy Father stops short of suggesting that an agreement was made (as some suspect), but that said, “demand” is a rather strong word in its own right; one that leaves the door open for more speculation.

–  The Synodal process, according to the pope, is “a protected space where the Holy Spirit may endeavour.”

It was unsettling enough when Pope Francis suggested that the breath of the Holy Spirit inspired the text of the Second Vatican Council, but the Synod?

Well, that’s the “God of surprises” for you, I suppose!

Pope Paul VI set the stage for this nonsense when he established the Synod for the purpose of allowing the bishops, together with the pope, “to facilitate agreement, at least on essential matters of doctrine and on the course of action to be taken in the life of the Church.” (Apostolic Letter, Apostolica Sollicitudo)

Sounds harmless enough until you consider the plain fact that there really are no “essential matters of doctrine” over which legitimate disagreements exist, and when there is such disagreement expressed, we have a name for it; heresy.

– This brings me to the “case of divorcees who have remarried,” as the pope called them.

According to Pope Francis, “We posed the question, what do we do with them? What door can we allow them to open?

I have a couple of questions of my own: Who says we have to do anything with them that isn’t already being done?

In other words, from where is this sense of urgency coming?

To be sure, unlike the homosexualist movement referenced in the previous post, the numbers of Catholics who are civilly divorced and remarried is indeed appreciable.

Even so, don’t be fooled; the urgency isn’t a response to the pleas of the “divorcees” themselves, it’s a fruit of the insatiable desire to reform that is part and parcel of the conciliar revolution.

Consider the “problem” as presented for our consideration by the pope:

In the case of divorcees who have remarried, we posed the question, what do we do with them? What door can we allow them to open? This was a pastoral concern: will we allow them to go to Communion? Communion alone is no solution. The solution is integration. They have not been excommunicated, true. But they cannot be godfathers to any child being baptized, mass readings are not for divorcees, they cannot give communion, they cannot teach Sunday school, there are about seven things that they cannot do, I have the list over there. Come on! If I disclose any of this it will seem that they have been excommunicated in fact!

OK, let me get this straight…

“Divorcees” are barred from reading the Scriptures at Holy Mass and disqualified from teaching Sunday school?

Not to be flippant, but on what planet is this the case?

Come to think of it, where exactly are those Catholic parishes, the pastors of which encourage (much less enforce) abstention from Holy Communion on the part of “divorcees who have remarried” until such time as they remedy their situation?

It’s difficult enough to find a bishop with the wherewithal to even suggest that notorious pro-abortion politicians abstain from Communion, and the pope thinks there’s an urgent need to make sure “divorcees” aren’t barred from acting as godparents and handing out Jesus on Sunday?

This is wholesale lunacy.

Having spent many a year in the Novus Ordo world, a number of them while abstaining from Holy Communion until my own marriage was regularized, I know firsthand that all but a tiny percentage of the people present rush forth to receive the Eucharist at every single Mass.

Oh, the “divorcees who have remarried” are there, and indeed some in this situation do willingly abstain from the sacraments, but the overwhelming majority simply march right on up for Communion with the rest of the herd.  And what’s more, the pastor knows it.

In fact, unless you happen to be one of those fortunate few who belongs to a parish that has some crypto-Lefebvrean tendencies or otherwise tends to lean in what Pope Francis would call a neo-pelagian restorationist direction, the proper disposition for the reception of Holy Communion is a message you will rarely if ever hear discussed.

That, my friends, is the real problem, and it’s an old one.

The failure of our pastors to teach the sacred deposit of Christian doctrine and to rule accordingly has been a problem for more than forty years now thanks to the earthbound, man centered orientation of the Second Vatican Council.

Our Blessed Lord warned His Apostles, “If the world hates you, know that it has hated me first.”

And yet the vast majority of the hierarchy today, not just including, but especially the pope, give forth every indication that they simply are not willing to risk being hated for His sake; preferring instead to conjure up solutions to make believe problems, all in an effort to court the affections of men.

A Pivotal Moment in the War Against Satan