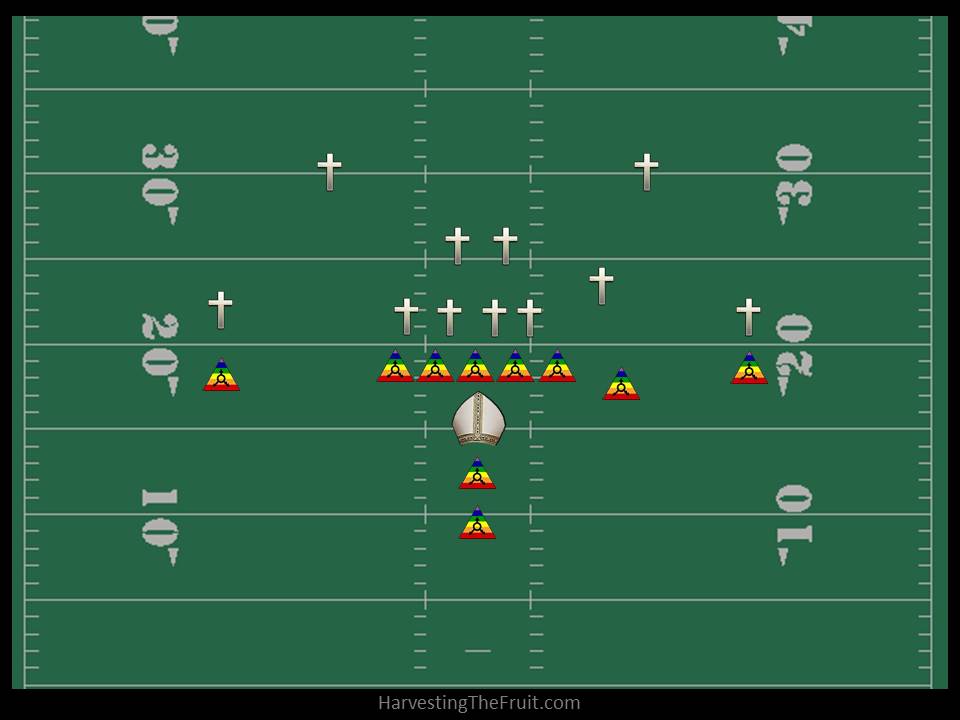 About the Synod’s treatment of homosexuality, Pope Francis offered in his recent interview with La Nacion:

What we did talk about was of how a family with a homosexual child, whether a son or a daughter, goes about educating that child, how the family bears up, how to help that family to deal with that somewhat unusual situation. That is to say, the synod addressed the family and the homosexual persons in relation to their families, because we come across this reality all the time in the confessional: a father and a mother whose son or daughter is in that situation. This happened to me several times in Buenos Aires. We have to find a way to help that father or that mother to stand by their son or daughter. That´s what the synod addressed. That´s why someone mentioned positive factors in the first draft. But this was just a draft.

So, according to Pope Francis, “We come across this reality all the time.”

That’s odd. Just a moment later he tells us, “This happened to me several times in Buenos Aires.”

So, which is it, Holy Father?

Does it come up “all the time,” or is this something that one might encounter just “several times” over the course of a forty year ecclesial career?

Alarmist talk such as this has always been the stock and trade of revolutionaries both within the Church and without.

John Courtney Murray, for example, in an attempt to anoint with Catholic chrism the American Constitutional model of religious liberty, the same eventually adopted at the Second Vatican Council, sent the following urgent plea to the future Pope Paul VI in a 1950 memorandum:

… the situation is critical: if this vital adaptation [of the Church’s traditional doctrine on religious liberty] is not immediately undertaken the result will be a progressive alienation of the American mind from the Catholic Church, with consequent damage to the apostolic activity of the Church.

In the present case, Pope Francis’ rhetoric seems to come straight from the playbook of the LGBT revolutionaries who, as a matter of strategy, have been deliberately lying about the prevalence of homosexuality for years; repeating the preposterous claim that some 10% of the population is gay, when study after study reveals that it’s really less than 2%.

Though unmentioned in the interview, consider a related alarmist claim that is being put forth by the Synodalistas; namely,  the ludicrous assertion that the Church must create pastoral initiatives to address “people living in [same sex] unions [who] request a child’s baptism.” (cf Instrumentum Laboris for the Extraordinary Synod)

Let’s take a moment to consider just how urgent that need is, or is not, by applying some common sense to what we know to be true; beginning with the fact that less than 2% of the population is “homosexual.”

Now, even though it’s no secret that homosexuals as a whole are notoriously promiscuous (i.e., they’re not exactly the “marrying” type), let’s just say for the sake of argument that every last one of them is in an allegedly “stable” (don’t laugh) so-called “same-sex union.”

This would mean that of the general population, less than 1% is comprised of a “unit” that one might consider a “same sex couple” (assuming that they connect in twos in spite of this being dangerously close to adhering to a “norm”).

While there is every reason to suspect that this too is a deliberately inflated figure, playing along for the sake of argument would mean that less than .25% of the general population is comprised of that unit known as “people living in a same sex union raising children.”

Of this group, how many self-identify as Catholic?

In the United States, the figure among the general population is slightly less than 25%. Surely, it is lower among active homosexuals, but let’s just apply that 1-in-4 figure to these couples as well, setting aside the fact that both “partners” aren’t necessarily of the same religion, just for the fun of it.

This would mean that only .0625% (that’s roughly 6 out of 10,000!) of the general population is comprised of that unit known as a “same sex couple that identifies as Catholic raising children.”

Now, of this statistically insignificant group of people, how many are banging on the rectory door “requesting baptism” for their kids?

The obvious answer? Practically none!

Clearly this tiny demographic doesn’t give a flying one-night stand in a gay bar bathroom about the sacraments, much less the doctrines of the Holy Catholic Church.

Of those who claim as much, arguably some small portion thereof really is seeking to respond to the promptings of grace, and God help the cleric who provides accommodation (stones) instead of the unadulterated truth that calls them to conversion (bread).

That said, is there really anyone so naïve as to not realize that the overwhelming majority of those “same sex couples” who claim to desire baptism for their unfortunate children, small in number though they most certainly are, really are looking for little more than for the Church to validate their sexual deviancy?

Well, if we’re charitable, we have to conclude that there are some among us who are so naïve, and one of them is running the show in Rome.