Home
Blog Post
The God of Surprises: Go dancing with the stars! 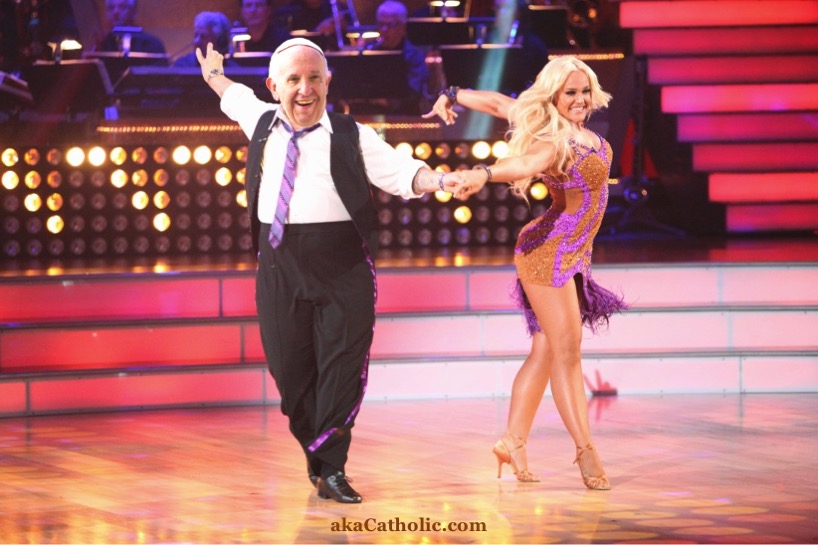 On March 6, the “God of Surprises” (aka Jorge Bergoglio) addressed an interreligious meeting with Muslims and Jews in Iraq. To no one’s surprise, he began by twisting Sacred Scripture in order to lend an air of credibility to the false claims he was about to make.

Setting the tone for the address, he said:

God asked Abraham to raise his eyes to heaven and to count its stars (cf. Gen 15:5). In those stars, he saw the promise of his descendants; he saw us.

From there, Bergoglio (stage name: Francis) repeatedly invoked the theme of looking up at the stars.

It is my opinion that the scene described in Genesis 15 is among the most interesting and edifying to be found in all of Scripture. How so? For the simple reason that the text suggests that Abram (as he was then known) didn’t see any stars at all!

The observant reader will notice that as Abram’s encounter with God is described further, we are told in verse 12: And when the sun was setting, a deep sleep fell upon Abram…

This was God’s way of urging Abram to faith, to believe and to trust Him, and he did:

Abram believed God, and it was reputed to him unto justice. (Gen 15:6)

According to Francis, however, it’s not necessary for Jews and Muslims to believe God as Abraham did – that is, to actually have faith in the one true God – in order to look upon Abraham as “our common father in faith” and to consider ourselves the “children of Abraham” – something he repeated numerous times throughout his address.

Sacred Scripture tells another story. As St. Paul wrote to the Galatians:

And if you be Christ’s, then are you the seed of Abraham, heirs according to the promise. (Gal 3:29)

Are the self-identified Jews to whom Francis spoke Christ’s? Are the Muslims?

Certainly not, they steadfastly reject Him. But guess who Jorge credits with being the author of these false religions? It is God, he says, who “gave birth” to them!

So, if not authentic faith in the one true God and His only begotten Son by which the unity of mankind is realized, what in Jorge’s opinion does bring “Jews, Christians and Muslims, together with our brothers and sisters of other religions,” as he puts it?

He informs his poor listeners that it is “by doing as Abraham did: we look up to heaven and we journey on earth.”

We look up to heaven. Thousands of years later, as we look up to the same sky, those same stars appear. They illumine the darkest nights because they shine together. Heaven thus imparts a message of unity: the Almighty above invites us never to separate ourselves from our neighbours. The otherness of God points us towards others, towards our brothers and sisters. Yet if we want to preserve fraternity, we must not lose sight of heaven. [Emphasis in original]

You see, for Bergoglio, those stars represent mere men, all people – heathens, heretics, Jews, atheists – who if only they band together will be as a great light amid the darkness, and what’s more, it is God himself who calls man to direct his focus upon his own kind.

The “message” of heaven according to Jorge is simple: Go dancing with the stars!

“The way that heaven points out for our journey is another: the way of peace,” he declared. Francis went on to underscore the point by offering a litany of earthbound endeavors that must be undertaken if we wish to realize the Scriptural promise of a day when men “shall beat their swords into ploughshares, and their spears into pruning hooks.” (Isaiah 2:4)

Where is Christ – the Savior, the Prince of Peace, the true Light of the world – to be found in the religion espoused by Jorge Bergoglio? Oh, sure, Jesus occasionally gets an honorable mention, but for those who have been paying attention, it is plain that Francis looks upon Our Lord as a mere man, and man as sovereign.

As suggested at the outset, in spite of being the self-appointed oracle for the “God of Surprises,” very little that Jorge Bergoglio does or says comes as a surprise.

In July of 2014, he boldly declared that man is “King of the Universe” and “the center of reflection and the center of life.” He went on to pledge, “And this is not theology, not philosophy – it is human reality. With this reality, we will move forward.”

With this in mind, one may be moved to concede that Francis is, at the very least, a man of his word, but that would be to give him far too much credit for originality. In truth, he is nothing more than the most recent version of the men who preceded him as leader of the church-of-man. He is a man of the Council.

According to the almost unanimous opinion of believers and unbelievers alike, all things on earth should be related to man as their center and crown. (Gaudium et Spes 12)