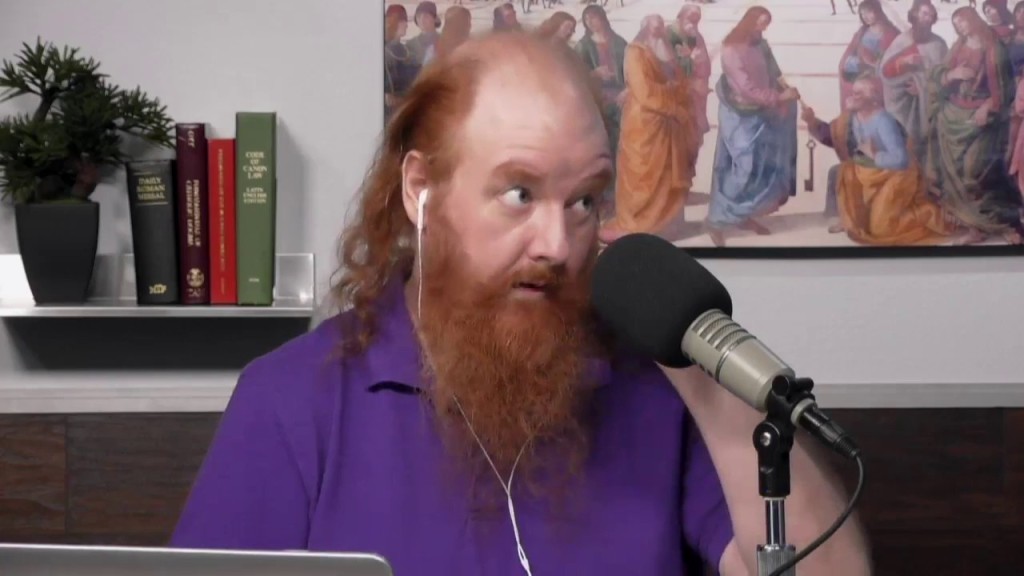 Akin begins, logically so, with the definition of heresy provided in the Code of Canon Law:

Heresy is the obstinate denial or obstinate doubt after the reception of baptism of some truth which is to be believed by divine and Catholic faith (CIC 751).

From there, he provides another necessary canonical definition:

A person must believe with divine and Catholic faith all those things contained in the word of God, written or handed on, that is, in the one deposit of faith entrusted to the Church, and at the same time proposed as divinely revealed either by the solemn magisterium of the Church or by its ordinary and universal magisterium (CIC 750 §1).

He then went on to say:

Consequently, a truth that requires divine and Catholic faith is a truth that, one way or another, the Magisterium has infallibly defined to be divinely revealed.” [Emphasis in original]

These truths, Akin explains, are called “dogmas,” which he further defines as follows:

Within the set of infallible doctrines is a smaller set that consists of those infallible teachings that the Magisterium has infallibly defined to be divinely revealed. These are the dogmas. [Emphasis in original]

If I understand Akin’s article correctly, his greatest point of emphasis (as suggested in the citations above) seems to be the suggestion that unless the Magisterium infallibly and explicitly defines a given doctrine as being divinely revealed, then said doctrine cannot properly be considered a dogma, and consequently its denial does not rise to the level of heresy. He writes:

Note that just because something is infallible, that doesn’t make it a dogma. The Magisterium has to have infallibly said that it is divinely revealed for that to be the case.

I would invite Mr. Akin to correct me if I have misread his position, but he seems to be treating the phrase “divinely revealed” almost, if not entirely, formulaically; as if a General Council that fails to explicitly state as much fails to teach dogmatically.

My first thought upon reading his article up to this point is that when a council; e.g., the Council of Trent, employs the formula anathema sit, this alone is enough to inform the faithful that the truth in question is sufficiently based in revelation as to be considered divinely revealed; i.e., dogma.

This understanding seems to be confirmed by the eminent theologian Fr. Ludwig Ott, who offered in his landmark work, Fundamentals of Catholic Dogma:

Anathema Sit. This signifies that the preceding proposition is officially condemned by the Church and is heretical.

To be clear, by stating that an anathematized proposition “is heretical,” one understands Fr. Ott to mean that it necessarily concerns the denial of dogma; that is, as Akin rightly proposed, the denial of a truth that is infallibly taught as divinely revealed.

Later in his article, Akin seems to anticipate this argument saying, “one has to be careful about this word [anathema], as it is sometimes used without making a definition (see Teaching With Authority §§480-488).”

Though I do not claim to know for certain, even if we allow that the Magisterium may occasionally use the word “anathema” relative to doctrines undefined, I would venture to say that this is the exception. Furthermore, as we will see below, when considered in context, it is reasonable to assume that one will be able to discern, without great difficulty, whether or not the matter being anathematized pertains to dogma.

With this in mind, it seems rather clear to me that when the Code of Canon Law speaks of a teaching “proposed as divinely revealed either by the solemn magisterium of the Church…” (see CIC 750 §1 cited above), it is not necessary for the magisterium to employ the phrase “divinely revealed” formulaically.

In fact, Akin seems to allow for as much when he speaks of a doctrine that “one way or another, the Magisterium has infallibly defined to be divinely revealed;” with one of those ways being via the use of the formula anathema sit.

At this, let’s consider just the first of the seven accusations of heresy listed in the Open Letter; a matter that has been treated in this space many times going back several years.  (e.g., see Roman Catholic Church v Francis)

The Open Letter accuses Francis of holding the following position:

For the sake of clarity, the authors of the Open Letter would have done well to provide direct quotes / citations for each of the seven charges. In this case, the aforementioned charge refers to the article in Amoris Laetitia that reads:

A subject may know full well the rule [divine law concerning the mortal sin of adultery], yet have great difficulty in understanding its inherent values, or be in a concrete situation which does not allow him or her to act differently and decide otherwise without further sin. (AL 301)

The authors of the Open Letter then provide the following relevant citation of authentic Catholic teaching in the matter:

Council of Trent, session 6, canon 18: “If anyone says that the commandments of God are impossible to observe even for a man who is justified and established in grace, let him be anathema” (DH 1568).

This particular canon refers back to that which was taught by the council in the preceding section entitled, “On keeping the Commandments, and on the necessity and possibility thereof.” The Council states:

But no one, how much soever justified, ought to think himself exempt from the observance of the commandments; no one ought to make use of that rash saying, one prohibited by the Fathers under an anathema – that the observance of the commandments of God is impossible for one that is justified. For God commands not impossibilities, but, by commanding, both admonishes thee to do what thou are able, and to pray for what thou art not able (to do), and aids thee that thou mayest be able; whose commandments are not heavy; whose yoke is sweet and whose burthen light. For, whoso are the sons of God, love Christ; but they who love him, keep his commandments, as Himself testifies; which, assuredly, with the divine help, they can do (Council of Trent, Session VI, Chapter XI).

In this, the Council is faithfully transmitting a teaching that comes to us from “the Fathers” of the Church, and also from Our Lord “as Himself testifies” in Sacred Scripture.

It seems quite obvious (to me, at any rate) that the teaching imparted therein pertains both to Tradition and to a truth divinely revealed – even though the phrase is not explicitly invoked. Furthermore, if Ludwig Ott is to be taken seriously, Canon XVIII appears to remove all doubt on this point when it attaches an anathema sit to its denial.

In spite of this, Jimmy Akin would have us believe that the matter under discussion pertains neither to dogma nor, therefore, to the possibility of heresy based on its denial. I find this very difficult to reconcile with all that has been stated above.

In his article, Jimmy Akin – a man with whom I have disagreed in the past but have always found to be a gentleman – assumes a surprisingly haughty and condescending posture, at one point taking a shot at the Letter’s signatories; pointing out that “none have doctorates in the relevant fields of canon law or sacred theology… [or] seem to be specialists in ecclesiology.”

All the more do I lack any formal education in the fields mentioned. Even so, Sacred Scripture itself gives no indication that only the cognoscenti among us – much less strictly those with doctorates – will be able to identify a heretic who must be avoided.

A man that is a heretic, after the first and second admonition, avoid: Knowing that he, that is such a one, is subverted, and sinneth, being condemned by his own judgment (Titus 3:10-11)

But though we, or an angel from heaven, preach a gospel to you besides that which we have preached to you, let him be anathema (Galatians 1:8).

As this debate concerning what is, and what is not, properly understood as a dogma – that is, a doctrine infallibly defined by the magisterium as divinely revealed; the denial of which is heresy – is central to both the Open Letter and Jimmy Akin’s refutation of the same, it is my hope that he will kindly respond to the points I’ve raised here-in; if not directly, then perhaps in a future article.