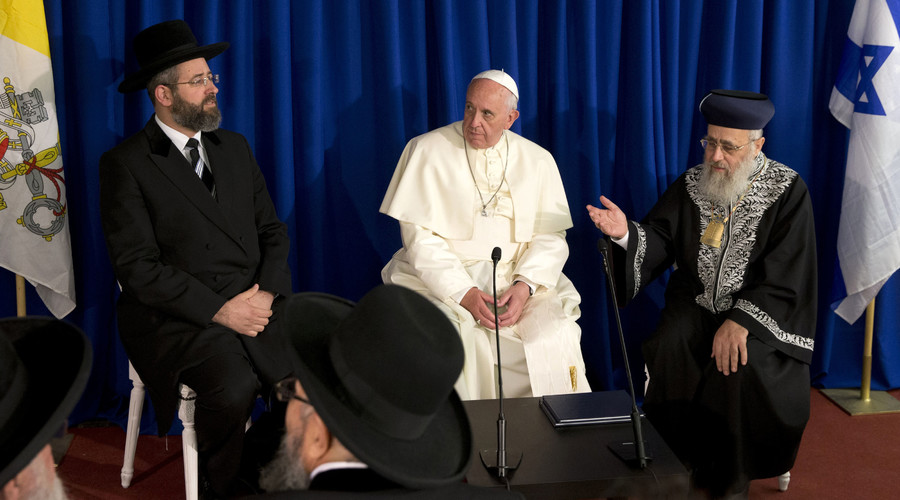 According to the Catholic Herald:

As one continues to read the direct quotes attributed to Szlajen, it becomes evident that this isn’t entirely true:

“In only one case does the Bible call for abortion: when the life of the conceptus inexorably threatens that of its mother,” he said. In such cases, the life of the mother takes priority.

Notice that Szlajen didn’t say that Sacred Scripture justifies abortion; rather, he said that the Bible (i.e., Almighty God Himself) calls for abortion.

Abortion is never acceptable. So, do the actual words used in this case matter?

Well, if nothing else, they demonstrate that evil has a way of constantly outdoing itself; always upping the ante. We may well expect this to be so until the final confrontation and the triumph of the Immaculate Heart.

In the present case, one may notice that the so-called “right to choose” is being overturned; in its place, we find the diabolical notion that God; whose rights supersede those of any man, actually calls for abortion.

The sheer audacity of claiming that God Himself at times asks that we commit mortal sin!

Who can be surprised. I mean, after all, Szlajen is a Jew.

He isn’t pretending to be Catholic, in spite of his appointment to the Pontifical Academy for Life. He doesn’t even self-identify as a protestant follower of Christ; on the contrary, the centerpiece of, and only thing one needs to know about, his religious identity is that it stands squarely upon his explicit rejection of Jesus Christ and His Holy Catholic Church.

There’s a reason Jews are at the forefront of every evil movement on earth; e.g., radical environmentalism, homo-activism, abortion, euthanasia…

In any case, as this story has been making its rounds in neo-conservative “pro-life” circles, it is leaving no small amount of outrage in its wake, and it should.

And yet, I haven’t seen an equal amount of outrage coming from the same quarters in light of the fact that Jorge Bergoglio, who not only insists that he is “a son of the Church,” but the Holy Roman Pontiff no less, made essentially the same claim; namely, that Almighty God Himself asks us to commit and persist in mortal sin.

It [the human conscience] can also recognize with sincerity and honesty what for now is the most generous response which can be given to God, and come to see with a certain moral security that it [adultery] is what God himself is asking amid the concrete complexity of one’s limits. (Amoris Laetitia 303)

Readers may recall that in spite of this, neo-conservative icon Fr. Frank Pavone, National Director of Priests for Life, gushed over Amoris Laetitia; describing it as  “a beautifully written … encouraging roadmap for families.”

Dr Szlajen justifies this position by citing the Jewish law of the “rodef”, which allows people in certain circumstances to kill someone who is endangering the lives of others.

Cases of anencephaly, irreversible degenerative pathologies and terminal disease where the “conceptus” will certainly die are examples of ‘tzorech gadol’ (grave necessity) where “abortion is permitted with severe restrictions”.

The Herald goes on to tell us:

Another member of the academy, Rabbi Avraham Steinberg said the unborn child has “no human status” before 40 days. After 40 days, it has “a certain status of a human being, not full status”.

One may wonder, why in God’s name are any Jews appointed to the Pontifical Academy for Life?

A better question, however, is why not?

After all, every one of the post-conciliar popes have made it crystal clear that they see the Jews as those who presently enjoy a salvific covenant relationship with God, as if Jesus Christ was simply wrong when He said:

If indeed it is true that the Old Covenant endures, then the “the Jewish law of the rodef” should be taken into consideration by the Pontifical Academy for Life.

The more fundamental answer as to why Jews and their opinions are now treated with esteem in Rome is Nostra Aetate (from the opening sentence “In our time”) – the calamitous conciliar document that makes the outrageous claim concerning the Jews of our time:

The Church believes that by His cross, Christ, Our Peace, reconciled Jews and Gentiles, making both one in Himself. (NA 4)

Yes, that’s right, the Council states that those who, like Rabbi Szlajen, reject Jesus Christ and His Cross, are made one with us “in Himself” in spite of their rejection of Him.

And to make this point, the Council misappropriated Sacred Scripture itself!

Perhaps those neo-conservative “pro-lifers” who are outraged that Szlajen is claiming recourse to the Bible for his grave offense against God, will consider the fact that the Rabbi isn’t doing anything that the Council hasn’t also done.

What the Council did, however, is more egregious still in that its misappropriation of Scripture leads to one to believe that there is no need for the Jews to enter the Catholic Church; a lie that threatens the eternal life of human beings.

As terrible as these stories are coming out of Rome, in part, I welcome each and every one of them; in the hope that they will serve to open the eyes of those Catholics who are presently blind to the pure evil that is being perpetrated in this world thanks to the Second Vatican Council, and its implementer extraordinaire, Francis.

May it please God to grant them sight, and soon.