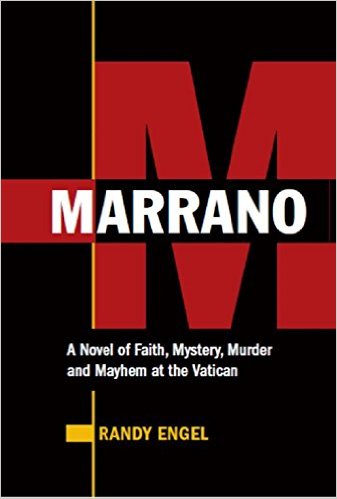 In recent months, I’ve had the sincere pleasure of speaking with Randy Engel – one of the nation’s top investigative reporters and, as many readers of this space know, the author of The Rite of Sodomy – Homosexuality and the Roman Catholic Church.

What you may be surprised to learn (as was I) is that she’s also a novelist. In the following interview, we discuss her new book, Marrano – A Novel of Faith, Mystery, Murder and Mayhem at the Vatican.

LV – I have to admit that I was surprised when I received a review copy of your latest book Marrano and saw the subtitle, A Novel of Faith. Mystery, Murder and Mayhem at the Vatican. That’s quite a change from your usual documentary, non-fiction writing, isn’t it?

RE – Yes. Marrano is quite a change from any book or article I’ve written since I started my writing career more than 50 years ago. However, in retrospect, I doubt that I would have been able to tackle the novel without having an extensive background in investigative journalism.

LV – I can understand that. It seems that one of the hallmarks of any good writer of both fiction and non-fiction alike is attention paid to detail. Marrano is packed with all kinds of interesting and pertinent details – religious, historical, geographical, and technical. Before we go any further, can you define for our readers what or who is “Marrano”?

RE – Certainly, Louie. The original pejorative term, literally Spanish for pig, refers to a baptized Jew living in medieval Iberia, who converted to Catholicism in order to escape forced exile, or gain economic or social advantages, but who continued to practice the Jewish faith in secret. If you will recall, in 1492, after the Spanish Army defeated the Muslim forces at Granada, the nation was unified under the banner – One People, One Kingdom, One Faith. In March of that same year, Queen Isabella and King Ferdinand II issued a writ of expulsion, the Alhambra Decree, which expelled all Jews from the Iberian Peninsula.

LV – Fr. José Miguel Marqués Campo has written about the Reconquista on the akaCatholic blog, and the heroic service to the Church of King Ferdinand II and Queen Isabella. I presume that they had what they considered good reasons for this order of expulsion, no?

RE – Indeed. The reasons were both religious and political. The decree was aimed at preventing baptized Jews, called New Christians, from backsliding and Judaizing, and to prevent Jews from reclaiming the conversos and returning them to Judaism and rabbinical authority. Politically, during the many centuries the Moors ruled Spain, the Jews, as a rule, sided with the Moors against the Christians and the nation which had given them protection and succor for generations.

LV – Weren’t the Marranos aware that Baptism is irreversible in the eyes of the Catholic Church?

RE – From examining copies of Marrano testimony before the Spanish Inquisition (1480-1834), I would have to answer, no. The false converts did not believe in any of the Sacraments including Baptism, and did not miss any opportunity to secretly defame the Sacraments as well as traditional Catholic devotions pertaining to the Blessed Trinity, and to the perpetual virginity of Mary, the Mother of God. Many baptized Jews believed the Alhambra Decree would eventually be rescinded or ignored, and they would then be free to return to the Jewish faith. The rabbis, on the other hand, were well aware of the implications of Jews submitting to Baptism.

LV – It seems to be a common held notion that all Jews, both baptized and un-baptized, were somehow subject to the Spanish Inquisition. Is that true?

RE – No. The Holy Office of the Inquisition only had jurisdiction over baptized Jews who were now Christians. Relations between non-baptized Jews and the Catholic Church were dictated by the pope and the Holy See.

LV – I can tell you from firsthand experience that many wrongly believe that the Church at that time supported a program of “forced conversion” of Jews. Can you tell us what the Holy See’s position on the matter truly was?

LV –Do we know how many Jews left Spain following the expulsion edict of 1492, and how many “converted,” albeit under duress?

RE – Depending on the source, somewhere between 165,000 to 200,000 Jews chose exile and resettled outside of Spain in major European Protestant lands and in the New World. Of the 100,000 Jews who submitted to Baptism and remained in Spain, most outwardly practiced the rituals of the Catholic faith, but were, in fact, Marranos, who still adhered to Judaism. These false converts were to form a deadly 5th column against the Catholic Church within the Iberian Peninsula and abroad for centuries to come.

LV – During the 300-year existence of the Spanish Inquisition, how many Marranos fell under the judgment of the Inquisition?

RE – Again, depending on the source, about 15,000. The majority of these were reconciled with the Catholic Church after their assigned penance was completed. Unrepentant Marranos were sent to the flames of the auto da fe or the galleys or burned in effigy. Those who managed to flee to other countries formed anti-Catholic alliances and organizations to attack the Catholic Church and the papacy from without.

LV – And your novel is about one of these secret societies?

RE – Yes. However, the timetable for Marrano is set in the not-too- distant future not the past. The fictional Order of the Sambanito, created in 1601 by wealthy and influential Marrano to help their brethren in Spain and Portugal escape the Inquisition, has been resurrected and reorganized in modern times in order to destroy the papacy by placing a Marrano pope on the Chair of Peter. When the book opens, the Order is on the threshold of succeeding in its mission. All that stands between the Order and the papacy is an ex-Marine, late vocation traditional priest by the name of Monsignor Antony Morello, secretary to the Chief Archivist of the Vatican Library, and a small group of the Sicilian Mafia agents hired to defend Morello against Jewish ex-Mossad assassins in the employ of the Order. This makes for an explosive mix.

LV – I’m curious about two things. First, do Marranos still exist? And second, when and how did you first learn about their history and beliefs?

RE – Yes, pockets of Marranos still exist around the world. They remain Catholics by day and Jews in secret by night. Some have officially reverted back to Judaism. To answer your second question, about 25 or 30 years ago, I saw a short reference to Marranos in a Catholic newsletter. I looked up the term in a Jewish reference book I owned and started to create a file and gather some books on the subject. I recall the popular mystery writer of The Firm and The Pelican Brief, John Grisham, was once asked how he developed his characters. He replied that some characters he had lived with for many, many years. In my case, by the time I was ready to write the first draft of Marrano in the spring of 2014, I had already lived with my heroes and heroines, and their adversaries for several decades. I knew them all intimately.

LV – What motivated you to write the book now, after living with the characters and the story for so long?

RE – Well Louie, like every faithful Catholic trying to hold on to the Barque of Peter in the face of a tidal wave of apostasy, turmoil and confusion, I pray that our Lord and Our Lady will protect us and deliver us from the evils which surround us. Until this time of great tribulation comes to an end, we must do what we can to encourage one other. Marrano is my way of not only upholding the Catholic Faith, but of giving encouragement to those of faint heart who suffer from feelings of despair and abandonment.

Our Triune God is still in charge of this world, as surely as He is in charge of the next. The rescue of our beleaguered Papacy may not happen as I describe it in Marrano, but I am confident it will happen in His own way and in His own time. And I am happy in that belief.

LV – Who is your favorite character?

RE – Hands down, my favorite character is Monsignor Antony “Tony” Morello. He is a composite of all the faithful and remarkable Catholic priests, bishops, and religious I  have been fortunate enough to know since I was a child growing up in New York, just outside the Bronx, where much of the early action in the book takes place. Marrano is my long-delayed tribute to these manly men and servants of God.

LV – I know that your book has only been out for a few months, but what has been the reaction to Marrano thus far?

RE – So far, so good, I would say. The uniform response from laymen and clergy alike has been what every fiction writer loves to hear – “once I read the Preface, I couldn’t put the book down.”

LV – Well, you can add my name to that list of people who found Marrano difficult to put down. Thanks so much for sending it my way and for sharing your thoughts with our readers.

Conclusion: I hope that this interview somehow did justice to Randy Engel’s new book, but to be honest, I think we only managed to scratch the surface. At the very least, this interview should give you a sense for just how much historical and religious treasure is woven throughout the entire novel, and why it’s such a worthy read.

For those of you who would like to obtain a copy, there a number of ways to do so: