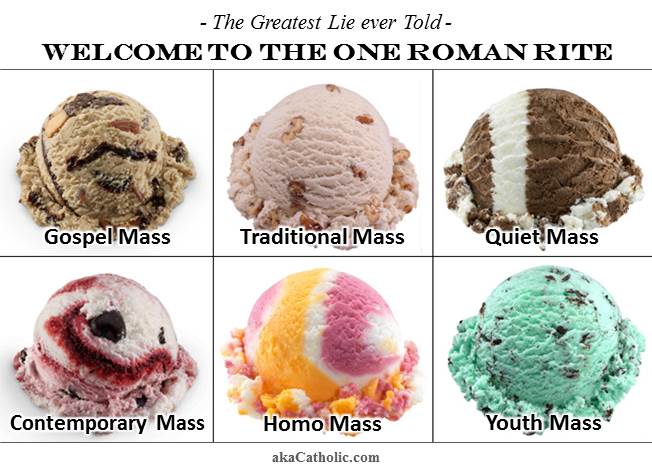 National Catholic Register recently published a post by Monsignor Charles Pope, Urgent Warning About the Future of the Traditional Latin Mass, that’s getting a decent amount of attention.

The gist of the piece concerns Msgr. Pope’s observation that the number of Traditional Latin Mass attendees seems to have hit a “ceiling” in recent years. He suggests, therefore, that something must be done in order to better promote the ancient rite beyond the “certain niche group of Catholics” to whom it appeals.

Some years ago (as far back at the early 1980s) we who love the Traditional Latin Mass often said (or it heard said) that if we would just return to the beautiful Latin Mass our churches would again be filled.

Msgr. Pope argues, however, that “simply offering a Traditional Latin Mass is not enough.”

He is entirely correct on this note.

The “build it and they will come” theory, whether its proponents realize it or not, is constructed upon the all-too-widely-accepted conciliar fallacy that the truth is so singularly compelling that it’s not really necessary to condemn error; if only the truth be proclaimed amid the cacophony of falsehoods, people will necessarily be attracted to it.

We will return to this critically important point in a moment.

For the present discussion, let us assume that Msgr. Pope is correct in observing that attendance at the Traditional Latin Mass has leveled off in recent years.

My focus herein concerns three things; the reason why this may in fact be the case, why we should have seen it coming, and most importantly, the only solution capable of making a substantial difference.

For his part, Msgr. Pope concludes that responsibility for promoting the Traditional Latin Mass and increasing attendance figures beyond the current “ceiling” lies neither with the diocese nor with the local bishop, but with that “niche group” that finds the ancient rite so appealing, saying:

At the end of the day, for any particular movement, prayer form, organization, or even liturgy, the job of promoting it must belong to those who love it most. Shepherds don’t have sheep; sheep have sheep … Even traditional Catholics have to evangelize.

There are a number of problems with this proposal.

First and foremost, if one’s starting point for addressing any matter concerning the traditional liturgy is to lump it together (even if only in a practical sense) with other ecclesial movements or “prayer forms,” the conclusions that will be drawn are guaranteed to be likewise flawed.

That said, Msgr. Pope didn’t conjure up this idea all on his own; rather, we can thank Pope Benedict XVI – the Chief Shepherd who invented the preposterous notion of an “Ordinary Form” and an “Extraordinary Form” of the “one Roman Rite” back in 2007.

This brings me to Msgr. Pope’s suggestion, “Shepherds don’t have sheep; sheep have sheep.”

While this catchy little phrase might be good bumper sticker material for Pope Francis’ fleet of Humblemobiles, it is – in the words of Pope St. Pius X – “contrary to the constitution on which the Church was founded by Jesus Christ” (cf Vehementer Nos – 8):

The Scripture teaches us, and the tradition of the Fathers confirms the teaching, that the Church is the mystical body of Christ, ruled by the Pastors and Doctors – a society of men containing within its own fold chiefs who have full and perfect powers for ruling, teaching and judging. It follows that the Church is essentially an unequal society, that is, a society comprising two categories of persons, the Pastors and the flock, those who occupy a rank in the different degrees of the hierarchy and the multitude of the faithful. So distinct are these categories that with the pastoral body only rests the necessary right and authority for promoting the end of the society and directing all its members towards that end; the one duty of the multitude is to allow themselves to be led, and, like a docile flock, to follow the Pastors. (ibid.)

Certainly, the laity are called to sacrifice in order to spread the faith, as well as to defend it as best they can wherever they can, but at the end of the day the Pastors of the Church are the ones responsible for promoting that which leads the flock toward the end that is willed by Christ.

Nothing so leads mankind than the Holy Sacrifice of the Mass, and it is here where the overwhelming majority of our sacred pastors are failing us the most.

Look, I don’t know if Msgr. Pope is correct in saying that Traditional Latin Mass attendance has reached something of a ceiling, but if it has, who can be surprised?

Whenever and wherever evil and goodness are given equal rights, the fallen human condition is such that men will more often choose the former; he will more frequently than not choose that which is easy, and comfortable, and entertaining over and against that which is truly good – even as doing so renders him great harm.

As Archbishop Marcel Lefebvre pointed out in his book, Against the Heresies, “it is easier to do evil than good, it is more in conformity with the disorder in human nature.”

In the present case, not only do our sacred pastors treat the Novus Ordo Missae as an equal to the Mass of Ages; they give it pride of place!

To be clear, I am not simply talking about the ubiquitousness of the Novus Ordo.

There can be no doubt that availability is a factor with respect to Traditional Latin Mass attendance, but of far greater impact is the unmerited esteem with which our Shepherds treat the Novus Ordo.

Think about it: the Novus Ordo Missae – a rite deliberately stripped of numerous venerable treasures simply because they convey the one true faith with such clarity as to make the heretics uneasy – is the only rite that has ever been publicly celebrated by each of the post-conciliar popes from the time of Paul VI to present!

As for the relatively small number of bishops that speak well of the Traditional Latin Mass (never mind actually celebrating it) – while they may do so in one breath, they consistently repeat the greatest lie ever told in the next; namely, that the Mass of Paul VI is simply another “form of the one Roman Rite.”

The Novus Ordo has more in common as a rite with the Lutheran Sunday service than it does with “the one Roman rite.” Even a child can see that.

The Novus Ordo, just as its name implies, is a new rite; one so laced with protestant poison that, when consumed over time by the unformed and unwary (i.e., practically all in attendance), it demonstrably leads to a loss of Catholic faith, at which point the Traditional Latin Mass, for many, will come to be viewed as all but repugnant.

The bastard rite of Paul VI also happens to be precisely the sort of easy, and comfortable, and oh-so-entertaining affair that appeals to the disordered masses (no pun intended), and given that it comes in more flavors than Baskin Robbins, there’s often a Novus Ordo Missae readily available to suit practically every liturgical taste imaginable; e.g., there are quiet Masses, children’s Masses, contemporary Masses, ethnic Masses, and even homo Masses within driving distance of many Catholics.

The bottom line is this:

Lay “traditional Catholics” (a redundancy if ever there was one) can promote the Mass of Ages among their family members and friends, and even their bishops, all they want, but until the “chiefs who have full and perfect powers for ruling, teaching and judging” (ibid) cease holding the Novus Ordo Missae up as if it’s an equal – fallen and ignorant men will more often choose otherwise.

While the Traditional Latin Mass is celebrated there on certain (and as far as I can tell, rare, mostly evening) occasions, his parishioners are regularly treated to so-called “Gospel Masses” that feature the kind of good ol’ fashioned foot stompin’ / hand clappin’ / “Amen!” shoutin’ (see video below courtesy of EWTN) that one might expect to find at just about any AME praise and worship service.

In any case, it appears rather evident that these poor souls, like so many others, have been misled by their pastor (and others) to believe that the Traditional Latin Mass is just another flavor of Catholic liturgy among many.

With this in mind, is it any wonder Msgr. Pope has observed a TLM attendance ceiling?

Don’t get me wrong, I’m not picking on Msgr. Pope. Apart from the fact that he actually celebrates the Traditional Latin Mass (which only serves to make him seem all the more credible to the undernourished),  he isn’t the least bit unusual with respect to misleading his flock in matters liturgical; he’s simply repeating the company line out of modernist Rome.

And this, my friends, is the point: Until that line changes in such way as to once again reflect the truth, little else will.

In the meantime, one may be compelled to ask where one might hope to find, if anywhere, sacred pastors who not only know the truth, but are willing to speak it plainly; to warn their faithful of the grave deficiencies and dangers associated with the Novus Ordo Missae, and to lead their flocks like true Shepherds?

Such men are rare, indeed, but I have the privilege of knowing a few – men like Fr. Michael Rodriguez (with whom you are invited to join me in traveling to Italy this summer) who are paying the price for their faithfulness.

Other such caretakers of souls can be found in droves in the Society of St. Pius X; from their transitional deacons, to their priests, all the way up to Bishop Fellay.

Their faithful, just like the rest of us, are surrounded on all sides by the Novus Ordo Missae. Many of them must travel great distances, or make other assorted sacrifices, simply to assist at the Traditional Latin Mass each and every Holy Day.

They don’t have a ceiling problem.