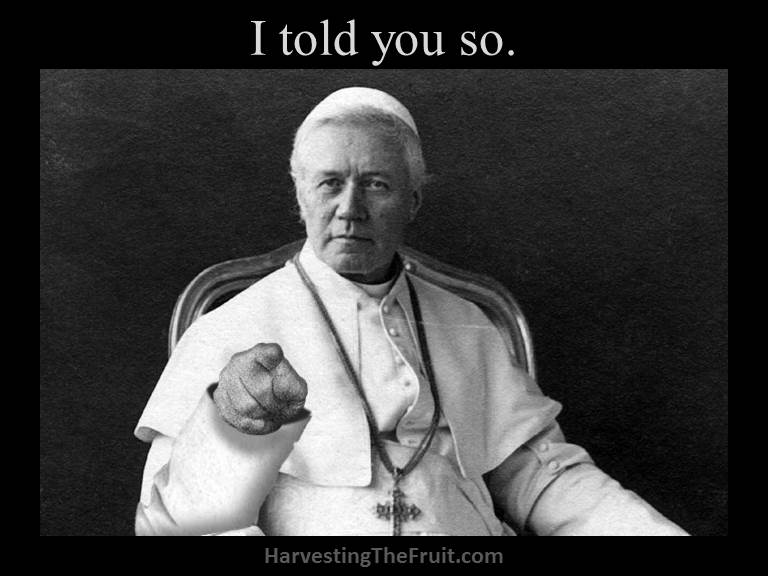 For who can fail to see that society is at the present time, more than in any past age, suffering from a terrible and deep-rooted malady which, developing every day and eating into its inmost being, is dragging it to destruction? You understand, Venerable Brethren, what this disease is—apostasy from God. – Pope St. Pius X, E Supremi Apostolatus, 4 Oct. 1903

Statements of this nature – at once instruction, lamentation, and warning – are not uncommon in the papal magisterium of the two centuries predating the Second Vatican Council. Upon encountering such things, many are tempted to say, “If only these popes could see the sad state of affairs in our day, they wouldn’t believe it!”

To an extent, this may be true, but not in the way that some people seem to imagine.

While the average person living in the nineteenth or early twentieth centuries may have never in their wildest dreams imagined the depths of depravity to which our current culture has descended, the popes of that age had always understood very well that this is precisely where society was destined to go if left unchecked by the only force capable of preventing it.

It was this very awareness that motivated the pre-conciliar Holy Fathers to so clearly sound the alarm, calling on individuals and States to recognize, embrace, and proclaim the authority of Christ the King.

“With God and Jesus Christ,” we said, “excluded from political life, with authority derived not from God but from man, the very basis of that authority has been taken away, because the chief reason of the distinction between ruler and subject has been eliminated. The result is that human society is tottering to its fall, because it has no longer a secure and solid foundation.” When once men recognize, both in private and in public life, that Christ is King, society will at last receive the great blessings of real liberty, well-ordered discipline, peace and harmony. (Pope Pius XI, Quas Primas, 1925)

What the venerable popes of the pre-conciliar age would perhaps find appallingly difficult to comprehend is the Second Vatican Council’s complicity in making straight the paths upon which the wickedness and snares of the Devil now proceed virtually unopposed.

They would marvel in disbelief at the weakness of their successors, from John XXIII to Francis.

They would look upon these men, not as “blesseds” and “saints,” but as shrinking papal violets who willingly ceased to proclaim the exclusive rights of Our Blessed Lord and the unique authority of the Holy Catholic Church who speaks in His name.

If this were not enough, who can even begin to imagine the sheer horror that would engulf these holy men upon witnessing the bastard rite of Paul VI.

Having digested the bitter reality of the Church’s self-destruction at the hands of their successors, the sad state of present day affairs would perhaps elicit a robust “I told you so” from the popes of tradition, each of whom knew very well that the voice of the Holy Catholic Church, the soul of society, if ever effectively reduced to just one more mouthpiece for the “rights of man,” would result in nothing less than society’s death spiral into godlessness.