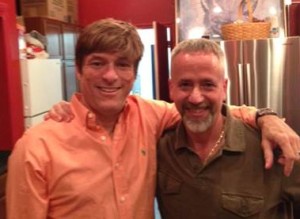 I’ve gotten a few emails and messages letting me know that Michael Voris has taken another jab at the Society of St. Pius X, alleging that they have a “schismatic existence” while taking “Rome” to task for allowing a situation that has “schismatics feeling they are in good standing.”

Often, these kinds of messages include the question; one I can’t even begin to count how many times I’ve been asked:

What the hell happened to Michael Voris? He never used to be so hostile toward traditionalists…

I get it. I’m as disappointed in Michael Voris as anyone – not because I have no idea what led him to stab his traditional friends in the back, but because I do. I just haven’t been interested in putting it out there.

I received an email from a young man on the staff of what was then called Real Catholic TV. He informed me that Michael Voris wanted to interview me in studio about the SSPX.

To this day I’m not sure why Michael wanted to interview me of all people on that topic, but apparently something I had written for Catholic News Agency caught his attention, and even though I was still wading in neo-conservative waters back then he must have gotten the impression that I was, if not a member, at least knowledgeable about the Society.

That interview can be seen in the video below (though it has since been purged from the CMTV website along with all of my other appearances).

2012 interview with Michael Voris on the SSPX from Louie Verrecchio on Vimeo.

While not a defender of the Society himself, one sees in this interview a Michael Voris unlike the one of today; the “old Michael,” a man who used to be singularly focused on discovering the truth and defending the Faith, so much so that his openness to the intentions of the SSPX and their Catholicity was entirely evident.

Over the course of the next couple of years, even after my writing reflected the fact that my eyes had been opened to tradition, I appeared on Michael’s programs a number of times, including a 13 part series that I did with CMTV in 2013 on the Second Vatican Council.

This series (also vanished down the memory hole), while measured in its criticism of the conciliar text, made it clear that the Council put forth propositions that are plainly irreconcilable with the Catholic faith.

While Michael and I weren’t exactly drinking buddies, he was most certainly someone that I’d call a friend and vice versa.

In that same time period, Michael had also become friendly with men like Chris Ferrara, Michael Matt, John Vennari, Dr. John Rao and James Vogel. He had spent time with each of them as co-speakers at the Catholic Identity Conference in 2013, and he was a guest (courtesy of a generous SSPX member) at Dr. Rao’s Roman Forum in Gardone, Italy that same year.

Going forward, he had Chris as an on-air guest a number of times, praising him for the keenness of his insights.

In short, Michael Voris was, without any question whatsoever, an ally to so-called “traditionalists,” even if not counted as one himself, properly speaking.

At some point in 2012, Michael was informed that the lease for the space that Real Catholic TV occupied was not going to be renewed.

At the time, their financial situation was such that finding themselves without a studio and effectively “out of business,” at least temporarily, was a very real possibility.

What happened next is all anyone needs to know about what precipitated Michael’s stunning about face wherein good Catholic men and fellow soldiers for Christ that he once called “friend” suddenly became, not only disposable, but objects of derision, as if almost overnight they had become the enemy.

At the eleventh hour, a “knight in shining armor” and fanboi of Michael Voris strode onto the scene; a wealthy FSSP parishioner from Texas who offered to purchase a nearby building where the newly named Church Militant.tv could set up shop.

This particular “benefactor” wasn’t about to content himself with simply writing a few checks while leaving the heavy lifting to the pros; no, this guy wanted a return on investment well beyond whatever sense of satisfaction might come from an act of Catholic philanthropy.

As such, he leveraged his financial clout to the point of effectively purchasing for himself, in addition to some real estate in the Detroit suburbs, the title of “Executive Producer” at CMTV.

Once entrenched in the day to day operations, albeit mainly via telephone calls and emails that no one dared to ignore, over time he was able to impress upon Michael, among other things, his personal hatred for the Society of St. Pius X, somehow convincing him to adopt that irrational position as his very own, at least insofar as the editorial slant of his programming is concerned.

Not content to stop there, the benefactor-turned-puppeteer also managed to convince Michael that it was necessary to take to the airwaves to vilify certain of his friends, not only for their support of the Society, but because they routinely cross a line in the sand beyond which the FSSP is, officially anyway, unable to go; namely, by pointing to the deficiencies and dangers of the Novus Ordo Missae and the errors of Vatican II, to say nothing of offering direct criticism of the words and deeds of the pope.

That’s pretty much it, folks. I wish there was something more honorable to the story, but there really isn’t.

The Michael Voris who had no problem calling attention to the Council’s landmines, and who gave the SSPX a fair hearing in light of the crisis in the Church, and who used to count guys like me, Chris Ferrara, Michael Matt, and John Vennari as friends, didn’t undergo some sort of “Road to Damascus” experience en route to the present day wherein he plays prosecutor, judge and jury in condemning the whole lot; rather, some guy with deep pockets bought him a building.

So, if you’re getting sick and tired of CMTV hurling calumnies in the direction of the SSPX and other defenders of tradition, you have two choices; either ignore their talking head altogether or buy him a bigger building, ‘cause that, my friends, is how Michael Voris rolls.