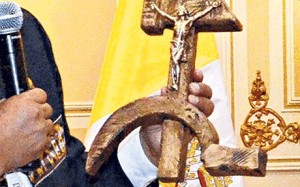 Catholic News Agency (CNA), the mission of which was once understood by its own to be that of providing an orthodox alternative to the USCCB’s Catholic News Service (CNS), has become a joke.

Sure, CNA has always been far more a “conservative” champion of all things conciliar than a true defender of the perennial Faith, but even so, the outlet had at times shown a noteworthy degree of openness to tradition (e.g., in publishing my series of articles on John Courtney Murray).

Well, that was before Benedict the Abdicator fled for fear of the wolves.

Under the reign (or siege depending upon one’s relative Catholicity) of Pope Francis, CNA has morphed into nothing more honorable than an active agent of papal propaganda intent on propping up his truly disastrous pontificate.

Knowing what I do of CNA’s Director, Alejandro Bermúdez, I am certain that he’s convinced that CNA is rendering a valuable service to the Church in its spinning of Francis.

He is, however, wrong.

In a recent news story excerpting Pope Francis’ in-flight comments wherein he explained that the hammer and sickle “crucifix” given to him by Bolivian president Evo Morales did not offend him, CNA editorialized a bit, saying:

Taking a “hermeneutic” approach to the crucifix – one that involves an interpretive act of understanding with an emphasis on dialogue – the Pope made an analysis of the times, saying that Fr. Espinal “was an enthusiast of this analysis of the Marxist reality, but also of theology using Marxism.”

What the hell kind of “hermeneutic” approach to blasphemy renders it acceptable to God and likewise unoffensive to those who love Him?

It’s enough to make one wonder if CNA’s editorial approach isn’t motivated, more than anything else, by a personal desire to see the first Latin American pope flourish in the eyes of the world; so much so that there is no offense against Christ that can’t be explained away.

The reason that the sacrilegious image of Our Blessed Lord nailed to a hammer and sickle did not offend Pope Francis is simple:

That is, he does not think and feel according to the mind of the Holy Catholic Church. In his view of the world, he’s far more populist than pope. This much has been obvious from the earliest moments of his papacy, and the hammer and sickle affair only serves to confirm it. Again.

As part of its attempt to put a Catholic spin on the pope’s behavior, the CNA report (which isn’t attributed any particular writer and is presented as a “news” item; not as an editorial), states:

He [Pope Francis] noted that during his life, Fr. Espinal had sympathies with the Marxist interpretation of Liberation Theology, which at that time was widely popular in South America.

Pay close attention to what is being said here:

In spite of the suggestion to the contrary, there really is no such thing as an interpretation of Liberation Theology that isn’t Marxist; i.e., it’s simply not possible for one to embrace the former without drinking deeply from the poisonous well of the latter, and rest assured, Pope Francis has most certainly done both.

This pope never tires of making his steadfast commitment to the almighty “class struggle” plainly known – the same that forms the very heart and soul of every self-respecting Marxist.

Indeed, in the foundational document of his pontificate, Evangelii Gaudium, Pope Francis makes numerous references to “inequality” among the classes before ultimately concluding, “Inequality is the root of social ills.” (And here you thought is was sin!)

Be not fooled, the Franciscan solution to this “inequality” problem isn’t conversion to Jesus Christ and the one true Faith, rather, its about much more earthbound endeavors, namely:

…international activity aimed at the integral human development of all the world’s peoples and by the legitimate redistribution of economic benefits by the State, as well as indispensable cooperation between the private sector and civil society. (cf Address of Pope Francis to representatives of the UN, 9 May 2014)

The reason CNA considers it so important to lead its readers to believe that there is a Catholic version of Liberation Theology is plain – Pope Francis embraces it.

Incidentally, this isn’t the first time CNA has shown a willingness to massage reality in order to paint a picture that is prettier (i.e., more Catholic) than the Bergoglian reality, in particular as it concerns Liberation Theology (e.g., see here).

CNA isn’t alone, certainly. They’re just one of any number of media outlets that, when Catholic sensibilities and Pope Francis collide, will bend over backwards to glorify Jorge, even if it means making excuses for egregious offenses against Christ.

As such, they simply can’t be trusted for Catholic news, much less any editorial content.