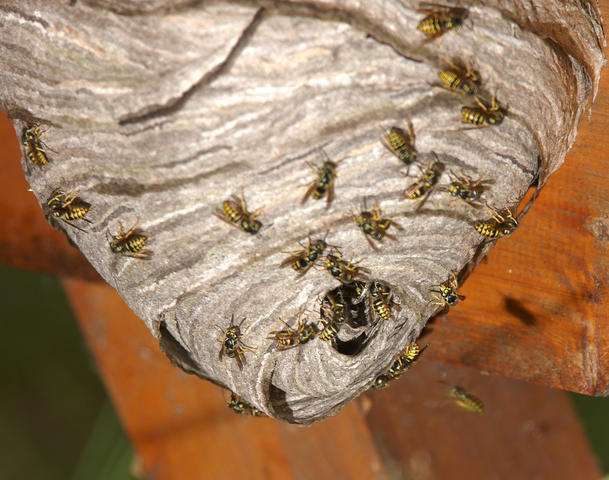 Since posting yesterday, I discovered a new definition for the expression “poking a hornet’s nest:” Pointing out to self-identified ‘traditionalists’ that a priest who celebrates the Mass of Ages for them is actually an enemy of tradition who champions the conciliar ecumenical heresy that lies at the very heart of the crisis in the Catholic Church today.

So, armed with this new awareness, what am I going to do now?

I’m going to poke that freakin’ nest again, of course!

No, not just for the sheer sport of it, but as a courtesy to the “hornets;” to afford them one more opportunity to come to terms with the painful truth.

Besides, there’s an important truth in all of this that can benefit a great many more people who are confused as to the terrible state of affairs in the Church today thanks in large measure to ecumenism.

Below is the entire video on the ecumenism of Vatican II that prominently features the commentary of Bishop-Elect James Massa.

WARNING: The entire production is beyond wretch-worthy. Watch it at your own risk.

For the present discussion, I want to focus on the following quote from Fr. Massa (beginning at the 6:00 mark).

Because of course we had this history of persecuting one another going back to the Reformation, going back to the very dark periods of religious intolerance. Prior to the Council, it was questionable whether Protestants from the Catholic standpoint were fully Christian; whether they were members of the one Church of Christ. It was debated between canon lawyers and theologians whether anyone but Roman Catholics were true members of the one Church.

Apparently, Fr. Massa believes that in order to examine these so-called “dark periods of religious intolerance,” one need look no further back in time than the pontificate of Pope Pius XII who said:

This true Church of Jesus Christ is the One, Holy, Catholic, Apostolic and Roman Church … As therefore in the true Christian community there is only one Body, one Spirit, one Lord, and one Baptism, so there can be only one faith. And therefore, if a man refuse to hear the Church, let him be considered – so the Lord commands – as a heathen and a publican. It follows that those who are divided in faith or government cannot be living in the unity of such a Body, nor can they be living the life of its one Divine Spirit. (Pope Pius XII, Mystici Corporis, 1943)

The Holy Father, Pius XII, would underscore this teaching some seven years later:

Some say they are not bound by the doctrine, explained in Our Encyclical Letter of a few years ago, and based on the Sources of Revelation, which teaches that the Mystical Body of Christ and the Roman Catholic Church are one and the same thing. (Pope Pius XII, Humani Generis, 1950)

I mean, the logic isn’t especially difficult to follow:

Even so, Fr. Massa makes the claim that “prior to the Council, it was questionable whether Protestants from the Catholic standpoint were fully Christian; whether they were members of the one Church of Christ.”

This simply isn’t true; Catholics had (and in fact, have) no reason whatsoever to question as much. The matter is settled: Protestants are not members of the one Church of Christ.

Note well that Pope Pius XII, in equating the Roman Catholic Church with the one Church of Christ in Humani Generis claims recourse to nothing less authoritative and binding than the “Sources of Revelation.”

What’s more, he does this expressly in response to those who claimed that they were not bound by his treatment of those who are outside of the Body by virtue of their rejection of the Catholic Church’s “faith and government.”

Let’s be very clear, the teaching of Pope Pius XII reviewed above is Catholic dogma, infallible and immutable; it’s not an open question that the pastoral council, Vatican II, a council that defined exactly nothing, somehow answered.

Pope Pius XII, for his part, was simply reiterating what was already well-established by his predecessors.

For since the mystical body of Christ, in the same manner as His physical body, is one, compacted and fitly joined together, it were foolish and out of place to say that the mystical body is made up of members which are disunited and scattered abroad: whosoever therefore is not united with the body is no member of it, neither is he in communion with Christ its head.

Again, as Pius XI was writing in 1928, there was no question as to whether or not Protestants “were members of the one Church of Christ;” the answer was perfectly clear to everyone worthy of the name “Catholic,” they are not.

Consider as well the words of Pope Leo XIII:

The practice of the Church has always been the same, as is shown by the unanimous teaching of the Fathers, who were wont to hold as outside Catholic communion, and alien to the Church, whoever would recede in the least degree from any point of doctrine proposed by her authoritative Magisterium. (Pope Leo XIII, Satis Cognitum, 1896)

In stating as much, Pope Leo XIII (as one can easily verify by reading the document in full, linked above) was at pains to establish recourse to Sacred Scripture and Tradition going all the way back to the time of the Apostles. He also cites a number of Church Fathers just for good measure.

The point is obvious; the matter under discussion here was in no way whatsoever up for discussion prior to the Council as Fr. Massa suggests; rather, it was, and is, a matter of dogmatic Catholic teaching.

In his defense, it must be said that Fr. Massa did not invent the ecumenical heresy of so-called “partial” communion; in fact, he’s promoting this modernist fruit of Vatican Council II no more aggressively than the popes of the past fifty years!

Indeed, this is precisely how a priest who is known to celebrate the Traditional Mass finds enough favor in Rome to be made a bishop today.

Look, I think we can all agree that if Fr. Massa was professing the immutable faith taught by Leo XIII, Pius XI, and Pius XII referenced above, while he may find still himself on the pope’s radar screen, it would be for an entirely different reason and reward.

So, “friends of Fr. Massa,” by all means remain in his friendship (and mine if you can stand it).

You might even consider using your influence with the Bishop-Elect to encourage him to reject the conciliar ecumenical novelties in favor of the Faith that has been handed down throughout the centuries, but please, don’t waste your time or mine telling me how traditional he is.