When the priest celebrates Holy Mass, he does so in persona Christi – in the person of Christ.

As St. John Chrysostom said, he “does nothing of his own power;” rather, it is the Lord Himself who is present and active in offering the Holy Sacrifice (Homily on the Holy Pentecost).

As such, Jesus Christ, the Eternal High Priest, is uniquely present and made visible to the faithful in the person of the ordained minister at Holy Mass. This is a reality that compels, or at least should compel, the priest to personally surrender to Christ after the example of St. John the Baptist who said, “He must increase, but I must decrease” (John 3:30).

The cleric who is burdened with the disorder known as homosexuality, however, will necessarily find this liturgical submission-of-self to be a most challenging proposition.

In 2012, while writing an article on this topic for Catholic News Agency, I spoke with psychiatrist Dr. Richard Fitzgibbons, a consultant to the Vatican Congregation for Clergy and a leading expert who has nearly forty years of clinical experience treating priests and others who suffer with “Same Sex Attraction” (SSA).

According to Dr. Fitzgibbons, “Narcissism – a personality disorder in which an insatiable need for admiration often leads to attention-seeking behavior – is prevalent among men who struggle with homosexuality. This conflict results in a need to draw attention to his own personality in the liturgy rather than to surrender his personal identity in favor of Christ.”

Apropos of this priestly conflict, Dr. Fitzgibbons called to mind Cardinal Ratzinger’s reflection offered during Stations of the Cross on Good Friday 2005, “How often do we celebrate only ourselves, without even realizing that He is there!”

While narcissistic behavior certainly isn’t the exclusive franchise of homosexuals, Dr. Fitzgibbons’ insights speak directly to the reason why homosexual men are particularly ill-suited for the priesthood – a truth that comes into ever sharper focus when viewed through the lens of the sacred liturgy.

Consider that in addition to being true God, Christ was not just true man, but also truly “male.” As such, He provides for us the perfect image of authentic manliness in action – a reality made expressly manifest at Holy Mass wherein the Sacrifice willingly offered by Jesus in love for His Bride and their beloved children is re-presented.

“The male who suffers with deep-seated homosexuality has difficulty in being Christ visible in the Holy Sacrifice of the Mass for a number of reasons,” Dr. Fitzgibbons said.

“For instance, a number of well-designed studies have documented that the homosexual man struggles with weaknesses in male confidence, which in turn makes it difficult for him to give of himself fully in the ministerial roles as a spouse to the Church and as a spiritual father to Her children as he is called to carry them out in persona Christi at Mass,” he continued.

The priest at Holy Mass is called to visibly model, in willing cooperation with grace, the quintessential father and husband who protects, provides and sustains those who depend on him for their very survival.

In order to do so, the ordained must have a healthy appreciation for his own God-given maleness. When this requisite level of male self-awareness is deficient, however, the priest’s ability to render such fatherly service to his spiritual family will necessarily be diminished.

This brings us to the tension that inherently exists between clerical homosexuality and ad orientem worship.

“The insecurity inherent to SSA could also predispose the homosexual cleric to seek the approval of the laity by treating the liturgy as performance or by otherwise calling attention to himself,” Dr. Fitzgibbons said. “Furthermore, the underlying anger and disdain for authority that is also endemic to homosexuality could lead to rebelliousness and a determination to ‘do his own thing’ with the liturgy.”

To put this in spiritual perspective, consider that when the ordained minister who is called to serve as “father” chooses instead to use the Mass (and by extension the assembly) as an occasion to meet his own needs (e.g., for approval and adulation), he is guilty of not just liturgical abuse, but of no less than spiritual child abuse.

Such a quest for self-fulfillment on the part of the priest is, of course, the antithesis of the spirit of the liturgy. According to Dr. Fitzgibbons, however, those who suffer with homosexuality often “see and treat their own pleasure as the highest end.”

As such, a substantial degree of tension exists between the homosexual cleric and the liturgy properly celebrated; indeed, the two are practically incompatible.

Dr. Fitzgibbons went on to say, however, that this tension can be breeched provided the cleric with SSA engages in intensive therapy and prayer with resolute determination, but even then only with great difficulty.

All of this having been said, it would seem to me that the apparent (nay, evident) increase in the number of priests who suffer with homosexuality, coupled with the liturgical crisis that emerged in all of its fullness in the decades after the Council, has created a perfect storm.

In the traditional Roman Rite, celebrated as it is in the Latin language and in the ad orientem posture, it’s relatively easy for the priest to “lose himself” in order to make room for Christ; his personality (and his underlying emotional health) remain largely hidden and of very little consequence.

In the Novus Ordo wherein the priest most commonly offers Mass in the vernacular language and in the versus populum posture (facing the people), by contrast, his personality (and at times his emotional health) is unavoidably on display.

Aware of the impact that his liturgical persona can have on the experience of the assembled faithful, the priest who celebrates Mass under these conditions cannot help but draw upon his personal resources in order to “perform” his duties in a compelling way.

Even in the best of circumstances, it is quite natural for the priest to feel so moved to perform his duties as the expectant eyes and ears of the faithful are ever cast upon him.

For him, Mass celebrated versus populum (and the spotlight that necessarily comes with it) represents not so much a burden as an opportunity; a venue in which to indulge his disordered desires for attention, affirmation and self-gratification.

One wonders, what led to the versus populum posture being adopted at Mass in the first place?

The Council Fathers didn’t explicitly encourage this dramatic change in the priest’s posture toward the people, nor did they call for the construction of free-standing altars to accommodate the practice.

Even the current edition of the Roman Missal for the Novus Ordo assumes that the priest is not facing the people.

As such, it is reasonable to wonder what sorts of influences and pressures within the presbyterate and the episcopacy itself may have allowed for such a radical liturgical innovation to take hold so quickly.

Could it be that an increase in the number of priests who suffer with homosexuality played a hand in bringing about the versus populum posture?

For insight, consider the following taken from the infamous John Jay Report that was commissioned by the United States Conference of Catholic Bishops. 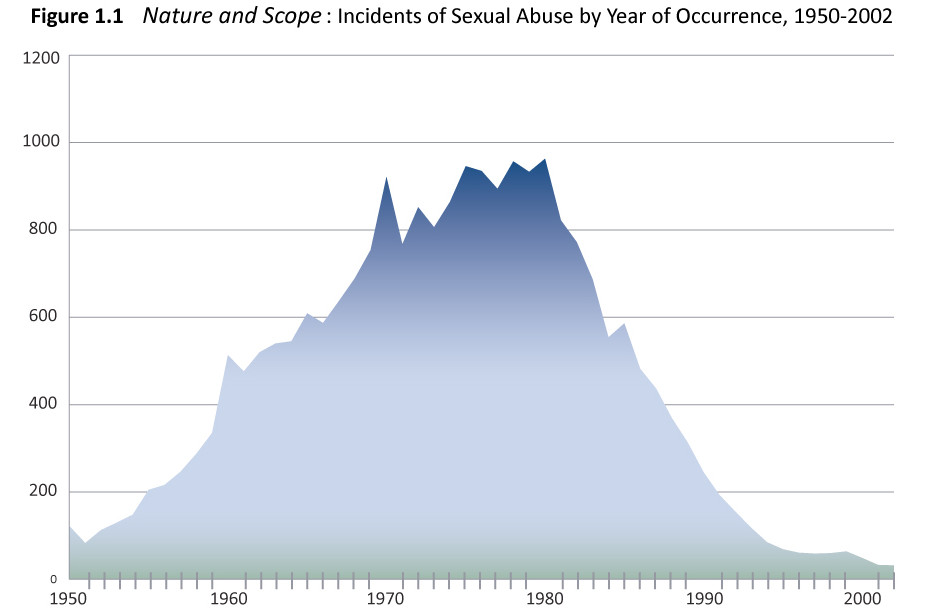 This graph represents “Incidents of Sexual Abuse by Year of Occurrence.” Given that these cases  of clerical sexual abuse are overwhelmingly homosexual in nature,  it is reasonable to infer a direct correlation to the number of priests suffering with SSA.

On close inspection, we find a steep increase in such abuse beginning in the mid-1950’s; just as liturgical experimentation was gathering worldwide momentum in the Church.

From there, we see a spike in such activity over a 10+ year period beginning in the late 1960’s, with unforeseen levels being maintained from 1970 and into the much of the 1980’s.

This just happens to be the very point in time during which the push to create a “priest-as-centerpiece” liturgy (celebrated versus populum) reached critical mass and had become the new international “normal.”

Coincidence? Perhaps, but then again maybe not.

Now, I certainly don’t wish to imply that the move to create a versus populum liturgy is best understood as a simple case of homosexual activism. Certainly, it was driven in large measure by those who wished to make the Mass more “heretic friendly.”

Even so, it would seem naïve to discount the role that clerical homosexuality (like leaven) may have played in promoting a liturgical agenda that dovetails so comfortably with the emotional neediness that comes with the territory.

Likewise, I am not suggesting that every priest who opposes a return to the ad orientem posture at Mass is struggling with narcissism, much less homosexuality. Many, I presume, are simply caught up in the momentum of the times.

That said, there’s little doubt in my mind that the versus populum liturgical “lump” that rose to prominence in the late 1960’s and early 1970’s was “leavened” in no small measure by the corresponding increase in the number of homosexuals in the clergy.

After all, these are men who, according to Dr. Fitzgibbons, are predisposed to “seeking the approval of the laity by treating the liturgy as performance or by otherwise calling attention to himself.”