On December 22, 2005, Pope Benedict XVI set the agenda for his pontificate with his now famous “hermeneutic of continuity” Christmas Address to the Roman Curia.

After seven plus years at the helm, the pontificate ended with the central theory underlying this approach to conciliar implementation (namely, that the decrees of Vatican Council II possess in themselves continuity with tradition) remains unproven.

One might conclude that Pope Benedict, try as he might, simply failed to accomplish the agenda that he set for his papacy, but the far more rational conclusion would be that the theory itself is flawed.

On October 10, 2012, those with eyes opened wide found ample evidence that this is indeed the case as L’Osservatore Romano published an essay from Pope Benedict XVI wherein the Holy Father shared some of his personal insights on Vatican Council II.

Among his most relevant, and disturbing, comments [in boldface below] concerned the Declaration on Religious Freedom, Dignitatis Humanae.

“With developments in philosophical thought and in ways of understanding the modern State, the doctrine of tolerance [of false religions], as worked out in detail by Pius XII, no longer seemed sufficient.”

One naturally wonders to whom, and in what sense, the traditional doctrine seemed no longer sufficient as the Council met.

Well, we know that John Courtney Murray, the chief architect and driving force behind Dignitatis Humanae, thought the traditional doctrine was insufficient simply because Catholics in the United States prior to the Council were viewed as less-than-trustworthy collaborators by America’s largely protestant political and social ruling classes.

Why? Because they claimed allegiance to the Roman Pontiff? Sure, but mostly because they proclaimed the Social Kingship of Jesus Christ and the Roman Catholic Church as the one true religion that alone has the divinely given right to carry out her mission in freedom.

To Murray, this represented a bona fide crisis; to the Holy See prior to Pope John XXIII, it represented little more than the blessed persecution that one should expect when carrying out the mission of the Church. (“And you shall be hated by all for my name’s sake.” – Mt. 10:22)

So doctrinally unacceptable were Murray’s attempts to anoint with Catholic chrism the religious pluralism enshrined in the U.S. Constitution that he was censured by the Holy Office in 1954, and he was forbidden to publish on the subject any further.

Just over a decade later, those very same ideas would be enshrined in the document, Dignitatis Humanae!

There’s no way to sugarcoat it; apart from serious qualification, this statement is nearly impossible to understand in a fully Catholic light as no one has a God given right to practice a false religion.

The first demand of justice is to render unto God that which He is due; i.e., to worship Him, not in the manner of one’s own choosing, but in truth, as He Himself established. It is toward this worship alone, according to Catholic doctrine, that man enjoys a positive right to religious freedom.

While free-will enables man to err and to embrace a false religion, sometimes in ignorance and at times even with the best of intentions (something that the Church, after the manner of her Lord, understands and tolerates, within certain limits), man does not enjoy a fundamental right to choose and to practice just any religion that suits his fancy.

“Given its inner foundation, such a concept [namely, a supposed right to choose and to practice any number of religions] could not be foreign to the Christian faith, which had come into being claiming that the State could neither decide on the truth nor prescribe any kind of worship.”

It is one thing to say that the State cannot decide, of its own authority, what is, and what is not, “the truth,” and indeed the Church has never imputed such authority to the State. As for “prescribing” worship, the Church has always held that man cannot be coerced into accepting the one true faith.

It is quite another thing, however, to imply, as the Holy Father did, that the State does not even have the ability to recognize the truth (more properly, the true religion) and therefore has no duty to seek it, uphold it and most importantly, to serve it.

It seems as though the former pope accepts the false notion that the State must concern itself with purely secular concerns alone, a proposition has long been rejected by the Church.

“That the State must be separated from the Church is a thesis absolutely false, a most pernicious error. Based, as it is, on the principle that the State must not recognize any religious cult, it is in the first place guilty of a great injustice to God; for the Creator of man is also the Founder of human societies, and preserves their existence as He preserves our own. We owe Him, therefore, not only a private cult, but a public and social worship to honor Him. Besides, this thesis is an obvious negation of the supernatural order.” – Pope Pius X, Vehementer Nos – 3

In any case, Benedict continued, “The Christian faith demanded freedom of religious belief and freedom of religious practice in worship, without thereby violating the law of the State in its internal ordering; Christians prayed for the emperor, but did not worship him. To this extent, it can be said that Christianity, at its birth, brought the principle of religious freedom into the world.”

The earliest Christians most certainly did “violate the law of the State” inasmuch as the State demanded that one render worship unto the Roman Emperor.

St. Polycarp (d. circa 155 A.D.), for instance, when urged to declare “Caesar is Lord,” and to offer incense to his likeness, refused, saying, “How then can I blaspheme my King and Savior? Bring forth what thou wilt.” For this, he was martyred by burning at the stake.

Secondly, the early Church, even as it was being persecuted, never insisted that the emperor, or anyone else, had “a fundamental right,” as Benedict called it, to practice the false religion of their choosing. Nowhere does one find evidence of the Church urging the State, as the Council does, to grant a civil right to pagans, that they may publicly worship their false gods.

Even if this was the case, why in God’s name would one simply gloss over nearly twenty centuries of sacred Tradition, as though the Church had not grown one iota in her understanding of the Sovereign rights of Christ the King, and for what, to recreate the good ol’ days when the State fed Christians to the lions?

“Yet the interpretation of this right to freedom in the context of modern thought was not easy, since it could seem as if the modern version of religious freedom presupposed the inaccessibility of the truth to man and so, perforce, shifted religion into the sphere of the subjective.”

In truth, the pluralistic approach to religious freedom adopted by the Council is often defended, as we have seen, by the implication that the truth is in some sense inaccessible, not so much to man, per se, but to the State, and this has most certainly contributed toward shifting “religion into the sphere of the subjective.”

One major point of departure from Tradition that is apparent in Benedict’s defense of Dignitatis Humanae lies in the fact that he, as all of the post-conciliar popes, fails to acknowledge (much less, insist) that the State has the very same obligation to seek and to serve the Lord Jesus Christ as any individual person.

In other words, the prevailing tendency of modernists is to treat the State as a nameless, faceless, less-than-human organ, when in truth (as Pope St. Pius X so clearly taught) it is not.

What becomes painfully evident in this reflection on Dignitatis Humanae alone is the degree to which propping up the “hermeneutic of continuity” approach to the Council requires one to sledgehammer square pegs into round holes, an exercise that can accomplish little more than perpetuating the current crisis; in other words, for as good as it may have sounded back in the day, it was truly dead-on-arrival. 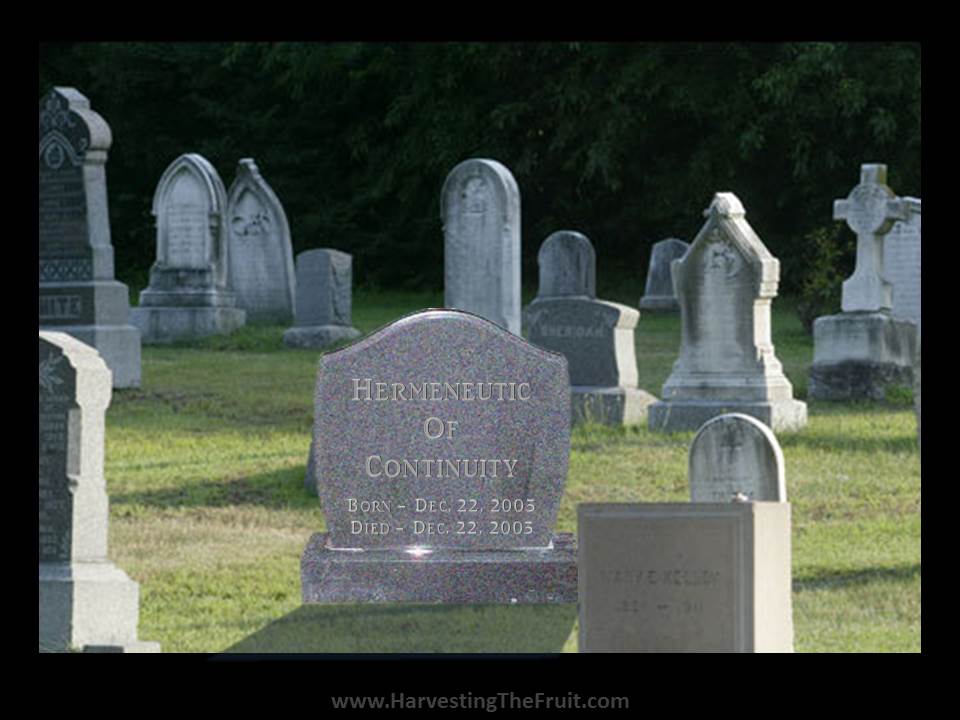