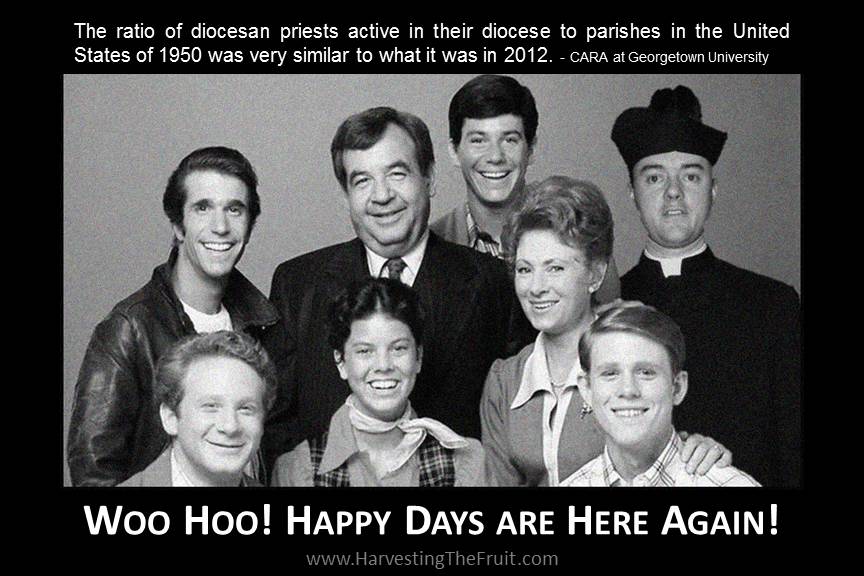 If so, it’s time to quit your whining about the pre-conciliar age and all of its “robust” Catholic life. You see, according to a recent post on the blogsite of the Center for Applied Research in the Apostolate (CARA) at Georgetown University:

It is also the case that what the United States is experiencing right now is not an entirely new reality—just one many have forgotten in the pages of history. As shown in the figure below * the ratio of diocesan priests active in their diocese to parishes in the United States of 1950 was very similar to what it was in 2012.

Get that? Happy Days are here again, bucko. Your diocese isn’t really crumbling; your bishop is simply retooling it for the New Evangelization! Capisce?

What’s that? You’re not buying it? Yea, well, join the crowd. Neither am I.

* The “figures” of which the blog post’s author, Dr. Mark M. Gray, Director of CARA Catholic Polls and a Research Associate at CARA, boasted are displayed on the following graph: 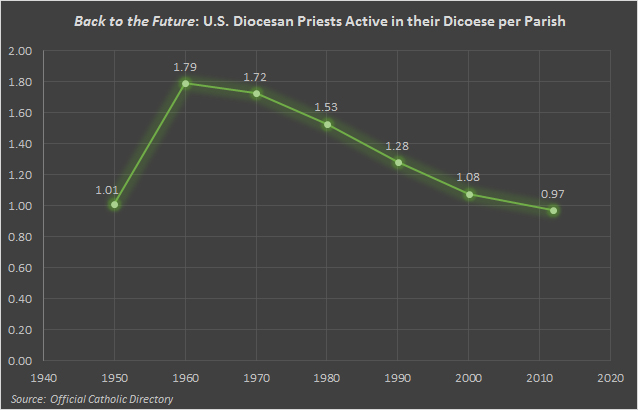 – In 1950, there was an average of roughly 1 active diocesan priest per parish in the United States.

– In 2012, there was an average of just under 1 active diocesan priest per parish in the United States.

Case closed! Right? Well, maybe not. There are some key statistics that Dr. Gray and like-minded spinmeisters of the New Evangelization conveniently overlook.

In that same period, the number of diocesan priests also dropped precipitously, from 35,925 to just 26,661, and all of this at a time when the self-identified Catholic population has grown from 48.5 million to 78.2 million.

All of that said, one of the most glaring oversights in this posting has to do with the fact that “priests per parish” is an utterly meaningless statistic apart from factoring in the number of parishes.

More than 1,500 parishes in the United States have closed since the year 2000. More than fifteen hundred!

Now, if only the wizards of the New Springtime would just close… I mean, consolidate another couple of thousand parishes out of existence, we’d be able to brag about how we’ve exceeded even the most glorious of Catholic ages in priests per parish. Just imagine the extent of our joy!

As it is, even Dr. Gray was constrained enough by reality to admit, “Every parish needs a priest. At least one. On Sunday for sure… Yet, nearly one in five U.S. parishes do not have a resident priest pastor.”

Here’s the bottom line: Over the last four decades or so, the visible structures of the Catholic Church, and the intangible things upon which they are built, have been steadily deteriorating right before our very eyes.

The captains of the New Evangelization can dismiss those of us who lament the  loss of liturgical piety, papal sovereignty and Christ-the-King-Centeredness in the Church as little more navel gazing triumphalists all they want, but manipulating data and spinning analgesic tales designed to pacify the malnourished masses is only going to accelerate the devastation.