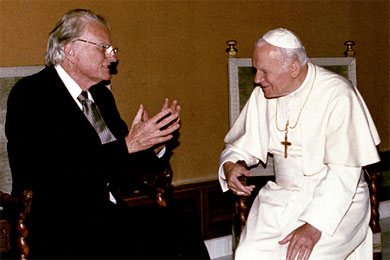 On the plane heading back to Rome from World Youth Day in Rio, Pope Francis was asked to describe Pope John Paul II.

“I think of him as ‘the great missionary of the Church,'” the Holy Father responded, “because he was a man who proclaimed Gospel everywhere.”

When I read this, a couple of questions came to mind…

First, did he really?

Did he really proclaim a fully Catholic understanding of the Gospel, one that communicates with utter clarity the mission of the Church as given by the Lord? Did he “everywhere” call heathens, heretics, humanists and various other practitioners of the many false religions of the world to enter the One, Holy Catholic and Apostolic Church of which he himself was the visible head, so that they may be united with us under his authority, in one Faith, partaking of the same sacraments?

Even John Paul II’s most devoted fans (and I use this word deliberately as it seems to best describe the disconnect between the reality of his papacy and the sentimental praise heaped upon his blessed memory) realize that the answer to these questions is a resounding no.

The next question that entered my mind as I tried to make sense of Pope Francis’ assessment of his predecessor as a missionary extraordinaire was simply this: Based on the “gospel” he preached most often, couldn’t one say the very same thing of Billy Graham?

With this in mind, I decided to take a look at some of Billy Graham’s sermons. Go ahead, try it for yourself.

What you’ll discover is that Graham often speaks of following Christ in a largely generic, nondenominational sense; he has a deep affinity for inter-religious dialogue and often addresses non-Christians, both directly and indirectly, in rather glowing terms, though he does stop short of invoking the intercession of the Saints to “protect Islam,” as John Paul II did.

In other words, while you won’t find any sermons on the Most Holy Eucharist or the glories of the Blessed Virgin Mary in Billy Graham’s body of work, his preaching in many ways sounds like much of the magisterium of John Paul II, a pope he once described as “an evangelist who sought to speak to the spiritual hunger of our age in the same way Christians throughout the centuries have spoken to the spiritual yearning of every age — by pointing people to Christ.”

Perhaps most noteworthy of all as it applies to being a “great missionary,” Billy Graham calls men to conversion to the Holy Roman Catholic Church just about as often as Pope John Paul II did, all of which leads to one final question:

Once Billy Graham passes from this life, how long will it take before a chorus of “santo subito” arises from the ranks of the same undernourished Catholics who refer to John Paul II as “the Great?”

No time for deniers