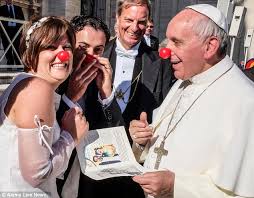 I love Pope Francis. I pray and I fast for him often, and I’m grateful to Our Lord for the great gift that is the exalted office that he occupies.

On the afternoon of 13 March 2013, like countless millions of other Catholics the world over, I was on my knees in hopeful prayer watching television in anticipation of meeting the man chosen to be the 266th Holy Roman Pontiff; the pope who would take up the Benedictine restoration with renewed vigor.

Tears came to my eyes as the doors to the balcony at St. Peters opened at long last and  the Cardinal Protodeacon, Jean-Louis Tauran, emerged to announce, “habemus papam!”

As he continued, “Eminentissium ac Reverendissium Dominum, Dominum Georgium Marium Sanctae Romanae Ecclesiae Cardinalem Bergoglio Qui sibi nomen imposuit Franciscum,” a friend turned to me and asked, “Who is it?”

I had to admit that I really didn’t know anything about the former Cardinal Jorge Bergoglio as we watched him walk out onto the balcony looking as if he hadn’t been given enough time to properly vest for the momentous occasion.

From there, it quickly became clear that the Holy Catholic Church was in for a rough ride.

“You know the work of the conclave is to give a bishop to Rome,” he said with a laugh, “It seems as if my brother cardinals went to find him from the end of the earth.”

Really, I thought? That’s why the entire world is watching?

Those words were at once disturbing and ominous, but also eerily familiar and for good reason; they had all but been plagiarized from his Polish predecessor, who upon his own introduction to the world said:

“And now the eminent cardinals have called a new bishop of Rome. They have called him from a far country…”

Though it would take some months to become clear to me, this was the first sign that Francis very deliberately intended to take up the mantle, not of Benedict XVI, but of John Paul II.

In October, I wrote:

A limited review of Redemptor Hominis is sufficient to demonstrate that the pontificate of Pope Francis is not so much a break from Benedict as it is a return, a rather aggressive return, to the task of implementing the conciliar aggiornamento in all of its necrotizing glory, in particular as conceived in the vision of Pope John Paul II.

In the process, the image that emerges is one of kindred spirits; two men unshakably committed to the idea that the Council was the dawn of a new beginning; each one so heavily influenced by a personalist theology that the mission of converting the nations to Christ and His Holy Catholic Church comfortably gives way to a desire to simply accompany their fellow men upon whatever path they may have chosen, content to assume that the Spirit is active in leading humankind along many and diverse ways, which for those who but follow their conscience, ultimately converge in God, a concept closely allied with the Teilhardian theory of evolution toward the “Omega Point.”

Even so, in the case of the former thespian and consummate performer John Paul II, the “Bishop of Rome” crack from the balcony of St. Peter’s was intended as a set-up for what followed.

“I don’t know if I can make myself clear in your… in our Italian language. If I make a mistake, you will correct me,” he said in an attempt to ingratiate himself to the Roman faithful, well aware that he was the first non-Italian pope in more than 400 years.

For Francis, by contrast, the “bishop of Rome” comment was far more than just the segue to a punchline; rather, it was the opening act for the humility-on-display spectacle that continues right up to this day.

In any event, mere moments after reducing the “work of the conclave” to a practical service rendered to the Diocese of Rome, Francis bowed his head and asked for the crowd’s prayers, like an alcoholic father asking his children to help him overcome his addiction.

At this, the pit in my stomach had turned into full blown nausea as it seemed all but obvious that dawning right before my very eyes was a pontificate that would prove to be far more a chastisement than a blessing.

Oh, how I wish I could say that I was wrong, but alas I was not…

And so here I sit ashamed, embarrassed and sickened by the awareness that a day will come, if God willing the Church should happen to emerge from the present darkness, when future generations will look back on the present pontificate and ask, “Who was this clown?”