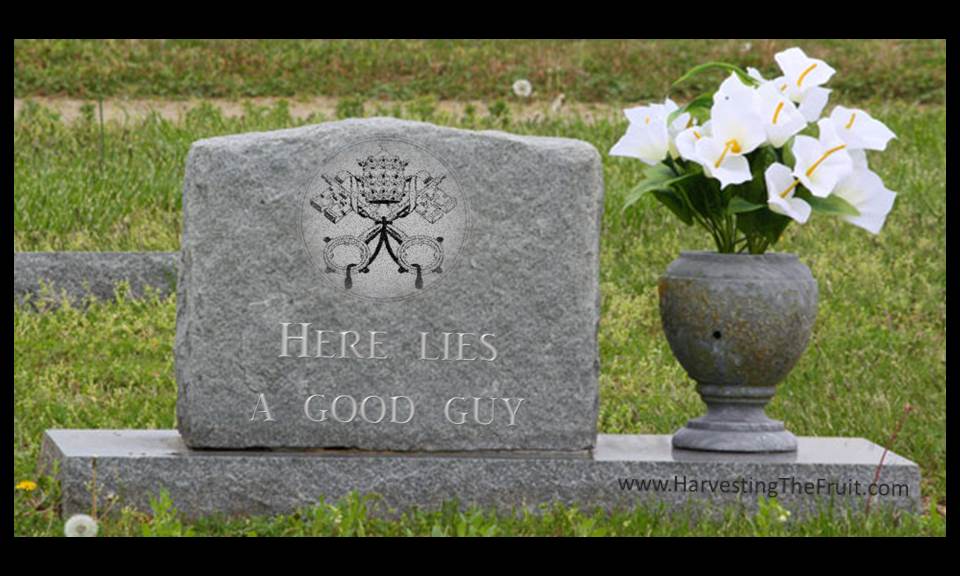 In follow up to the previous post, let’s take a closer look at the pope’s La Vanguardia interview.

POPE FRANCIS: At the center of all economic systems must be man, man and woman, and everything else must be in service of this man. But we have put money at the center, the god of money. We have fallen into a sin of idolatry, the idolatry of money.

Neither must it be supposed that the solicitude of the Church is so preoccupied with the spiritual concerns of her children as to neglect their temporal and earthly interests. Her desire is that the poor, for example, should rise above poverty and wretchedness, and better their condition in life; and for this she makes a strong endeavor. By the fact that she calls men to virtue and forms them to its practice she promotes this in no slight degree. Christian morality, when adequately and completely practiced, leads of itself to temporal prosperity, for it merits the blessing of that God who is the source of all blessings… (Rerum Novarum 28)

For Pope Leo XIII and his contemporaries, placing Christ at the center of all human activity, including that which is economic, is the answer to man’s needs; in this case, his temporal needs, even unto prosperity.

For Pope Francis and his post-conciliar counterparts, by contrast, placing man himself at the center of all things is the preferred approach; taking the place that properly belongs to Christ and supplanting the worship that is due to Him first and foremost with an almost singular focus on human dignity.

The anthropomorphizing mission of the Council is running full throttle now, and its captains no longer even bother to pretend otherwise. Either they will succeed in ushering in the final persecution, or we are witnessing the death throes of this dreadful episode in the life of the Church.

Moving on, the Holy Father was asked to comment on the popular perception that faith and science are mutually exclusive…

POPE FRANCIS: The clash between science and faith peaked in the Enlightenment, but that is not so fashionable today, thank God, because we have all realized the closeness between one thing and the other. Pope Benedict XVI has a good teaching about the relation between science and faith. In general lines, the most recent is that the scientists are very respectful with the faith and the agnostic or atheist scientist says, “I don’t dare to enter that field.”

Perhaps something was lost in translation here (God please!), but the notion that today’s “scientists are very respectful with the faith” is perplexing. With reports that an encyclical on the environment is forthcoming, this doesn’t bode well. (Not that it did beforehand, mind you.)

Speaking of the legacy of Benedict the Abdicator…

POPE FRANCIS: Pope Benedict has made a very significant act. He has opened the door, has created an institution, that of the of the eventual popes emeritus.

Imagine, multiple popes emeritus. It’s not clear if Pope Francis envisions there being more than one at any given time, but I can imagine a day when several of them may appear together for a photo-op, perhaps at a ribbon cutting ceremony of some kind, or the funeral of some pro-abortion politician, or the canonization of a future recipient of the newchurch “Santo Subito Lifetime Achievement Award,” at which point the remaking of the papacy in the image of mere politicians will be nearly complete.

Finally, having been asked how he would you like to be remembered…

POPE FRANCIS: I have not thought about it, but I like it when someone remembers someone and says: “He was a good guy, he did what he could. He wasn’t so bad.” I’m OK with that.

Understanding that this is something of a “no win” question, I don’t find this sort of homespun, front porch rockin’, down on the farm, regular Joe kind of answer very edifying. This is the pope speaking, for crying out loud!

Is it too much to hope that he would have aimed a little higher than an epitaph that says, “Here lies a good guy.”

I mean, he could have spoken of things like sanctity, holiness, and dare I say sainthood. (Although given the change in definition, that doesn’t mean what it used to mean.)

In any case, I think even non-Catholics realize that the pope is here to lead us to something greater than “not so bad.”

The “diminished and distorted” Christ of Pope Francis