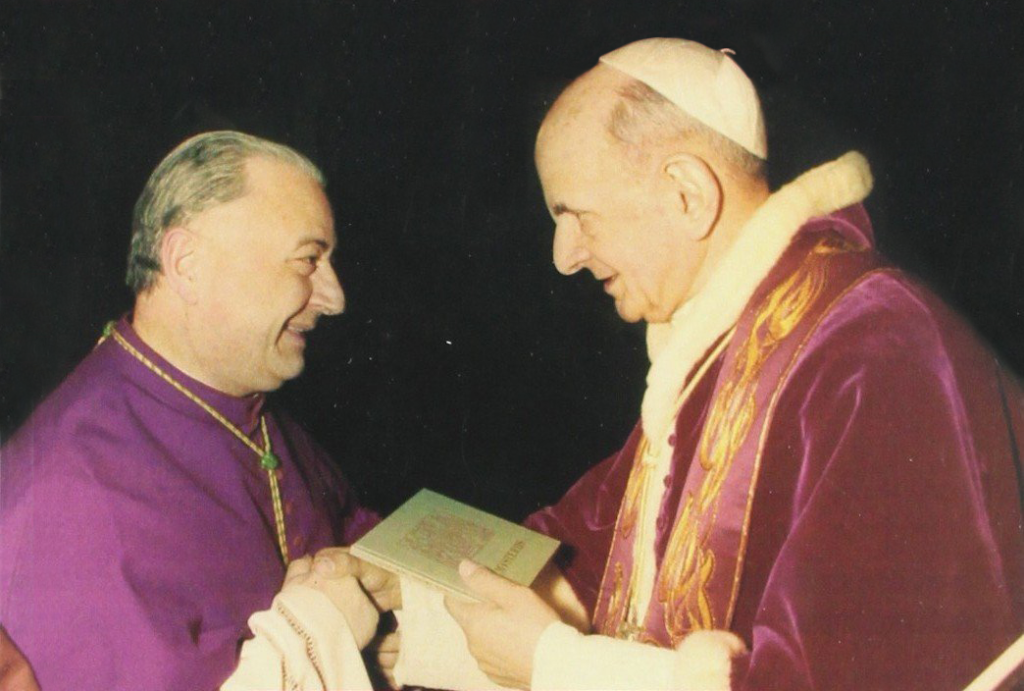 At the General Audience earlier today, Francis presented Part 3 of his “catechesis on the Mass,” which he began by asking a critically important rhetorical question:

What essentially is the Mass?

I’m not certain for how many more weeks we can expect this “catechesis” to continue, but today we have arrived at the very heart of the matter: What is the Mass in its very essence?

If the answer offered to this question is in any way deficient, the end result of this series – no matter what follows – will most certainly not be Catholic. (As if anyone really expected it to be.)

Based upon the content of the previous two parts, it should come as little surprise to discover that Francis’ answer is straight out of the Bugnini playbook as so masterfully evaluated by Cardinal Ottaviani and his confreres in his Brief Critical Study of the New Order of Mass (aka the Ottaviani Intervention).

The Mass is the memorial of the Paschal Mystery of Christ.

In order to comprehend the value of Mass we must first understand the biblical meaning of the “memorial.” It is not only the memory of past events, but it makes them in a certain way present and actual. That is exactly how Israel understands its release from Egypt: every time Passover is celebrated, the events of the Exodus are brought to the memory of the believers in order to conform their lives to them.

Let’s unpack this, shall we.

Can we say that the Sacrifice of the Mass is in some sense a like the Passover and its memorial insofar as they prefigured it, with the Passover observation understood as making the ancient event present to those Jews who participate in it?

Sure, and the parallels are striking indeed.

In order to avoid error, however, it must be stressed first and foremost that the Mass is a true and propitiatory Sacrifice offered in atonement for sin for the benefit of both the living and the dead.

As may already be obvious, the comparison of the Mass to the Passover observance of the Jews (the Seder meal) can be taken way too far.

For example, the Passover observance of the Jews is such that all who participate in it must eat the flesh of the lamb, and one’s failure to do so necessarily placed them outside of the community of God’s people.

If we’re not careful to stress what the Mass truly is in its essence (as described above) one might be led to embrace the false notion (promoted by Francis and addressed in my first post on this topic) that one must receive the Most Holy Eucharist in order to participate in the Mass.

Let us turn now to Cardinal Ottaviani and his protestations against characterizing the Mass primarily as a “memorial.”

First, he stated that defining the Mass as memorial is “acceptable relatively,” however, it is “unacceptable if employed … separately and in an absolute sense.”

This is precisely what Francis has done.

[The Mass] is further characterized as an assembly presided over by the priest and held as a memorial of the Lord, recalling what He did on the first Maundy Thursday. None of this in the very least implies either the Real Presence, or the reality of the sacrifice, or the Sacramental function of the consecrating priest, or the intrinsic value of the Eucharistic Sacrifice independently of the people’s presence. It does not, in a word, imply any of the essential dogmatic values of the Mass which together provide its true definition.

There’s much here to consider.

Recall that Francis, in his introduction to the topic two weeks ago, spoke specifically of “the priest presiding over the celebration.”

We also made note in our examination of his catechesis on the Mass last week, wherein he focused on the “experience” of the people, how he obscured the reality that the Mass is a storehouse of infinite graces and the very work of redemption whether the people are present or not.

So far it seems as though Francis is determined to insist upon precisely the errors about which Cardinal Ottaviani warned!

His Eminence went on to cite the Council of Trent:

The Sacrifice of the Mass is a true propitiatory Sacrifice and NOT a “bare commemoration of the sacrifice accomplished on the Cross.” [Emphasis in original]

Francis – while ostensibly commenting upon the essence of the Mass – does not mention the word “sacrifice” even once; much less its propitiatory nature!

Francis went on to say:

This is the Mass: to enter in the Passion, Death, Resurrection and Ascension of Jesus…

Even this is problematic in that, as Cardinal Ottaviani states, the Mass is the Sacrifice of Christ alone:

The formula “the Memorial of the Passion and Resurrection of the Lord” is, besides, inexact, the Mass being the memorial or the Sacrifice alone, in itself redemptive whilst the Resurrection is the consequent fruit of it.

And in the Eucharist, He wishes to communicate to us His paschal, victorious love. If we receive it with faith, we can also truly love God and our neighbor, we can love as He loved us, giving His life … Only if we experience this power of Christ, the power of His love, are we truly free to give ourselves without fear.

A number of things stand out:

Notice that Francis is once again suggesting that reception of the Eucharist is that from which one derives the fruits of the Mass, an error addressed in our examination of Part One. He is also returning to the notion of “experience” – a core modernist principle.

And what does he count as the fruit to be derived therefrom?

The ability to love God and neighbor; a wonderful gift to be sure, but this sounds an awful lot like he is speaking of the Mass and the Eucharist as fuel for acts of social justice, does it not?

We will see what next week brings…

In the meantime, those of you who wish to gain a Catholic understanding of the Mass would do well to read the Ottaviani Intervention by following the link.

Covid-19 and the Art of Brainwashing – Part IV