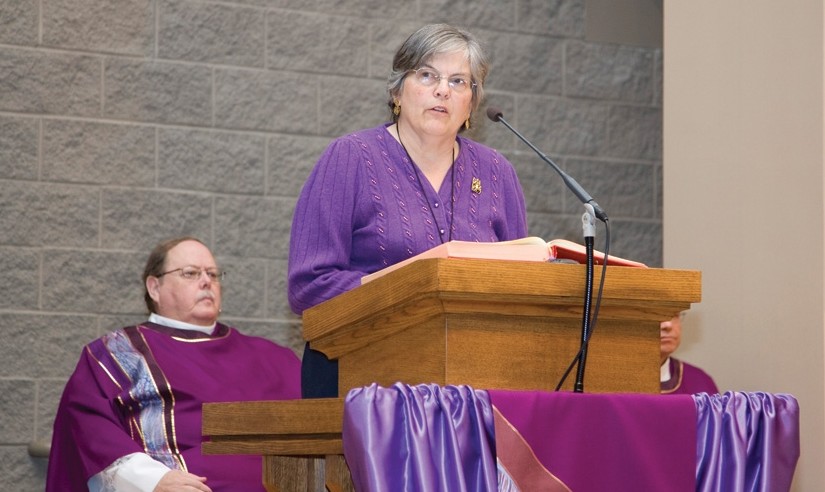 According to CathNews – the news service of the Australian Catholic Bishops’ Conference – Cardinal John Dew, Archbishop of the Archdiocese of New Zealand, encouraged his pastors to make some changes to the Mass for Sunday, October 29; presumably as a dry run for something more permanent.

… parishioners at Catholic churches in New Zealand will notice the Liturgy of the Word is a little different: the Gospel will be prayed using an ancient process called Lectio Divina (Holy Reading).

Guess who Cardinal Dew cited as his inspiration?

This Lectio Divina initiative is a way the Archdiocese is responding to the plea of Pope Francis to make the sacred Scriptures better known and more widely diffused. He has reminded us that we can take creative initiatives in our parishes so that we can become ‘living vessels for the transmission of God’s word.’

What will happen is the reader will invite the congregation to close their eyes and listen prayerfully while the Gospel is being read.

Mary Agnes Busybody, longtime parish secretary and gatekeeper at the Catholic Community of Heresyville, ascends the pulpit to proclaim the Gospel of the Lord; meanwhile, Father Les Manly, vested in daisies and rainbows, sits in the presider’s chair with his eyes closed.

Even in my limited review of such responses, I’m fairly confident that readers of this space will find none more entertaining than the one posted by Fr. Dwight Longenecker; an Anglican convert who is familiar to many.

What on earth does a cardinal in the church actually believe about the liturgy? Does he really think it is some kind of touchy feely retreat experience? … Does the cardinal really not understand the formal and ritualistic function of the liturgy, and that to personalize it too much takes away the corporate, ritualistic aspect of the Mass which touches people more deeply than a conscious meditation session? It would seem not.

Fr. Longenecker made it clear where he stands on the matter:

The liturgy is a great gift from the ages to the world today. It is a masterpiece of culture, spirituality, worship and ritual. It is not up to us to be creative with it. Being creative with the liturgy is like painting a mustache on the Mona Lisa.

All of these sentiments seem quite appropriate until one is reminded that the liturgy under discussion is the Novus Ordo Missae.

That’s right, we’re talking about Annibale Bugnini’s “masterpiece;” the same that Pope Paul the Pathetic unceremoniously crammed down the throats of Latin Rite Catholics less than fifty years ago.

This, according to Fr. Longenecker, is the “great gift from the ages” that one dare not sully with creative initiatives.

What on earth does a married former-Anglican priest actually believe about the way the Novus Ordo came to be? Does he really not understand that the entire affair is but one big manmade creative initiative? It would seem not.

After rightly identifying the idea of “Lay Leaders” as nothing more than “a ruse to bring women into roles reserved to the clergy,” Fr. Longenecker says:

The final worry about this news item is that being “creative” in the liturgy continues the trend of team Francis to insinuate ambiguity into the church wherever possible, and for ambiguity it is ok to read “relativism.”

I find the choice of words here hilarious.

Contributors and commenters at akaCatholic have often criticized as weak those who insist upon charging Francis with making “ambiguous” statements that stand in need of “clarification;” even when (as in the case of Amoris Laetitia) his words and deeds are perfectly clear.

You can’t make this stuff up.

In any case, getting back to the CathNews report, Cardinal Dew is quoted as saying:

The Leader will remind them [the congregation and the priest] they are in God’s presence, so all they need to do is let the Holy Spirit lead their understanding of what has been read.

Isn’t this the same process by which Protestants came to “understand” that Our Lord’s words as recorded in John 6 (“My flesh is food indeed…”) are merely symbolic and entirely spiritual?

Look, the undeniable fact of the matter, evident from simple observation alone, is that the Novus Ordo Missae is where self-identified Catholics go to lose their faith – or what little faith they may have had – often without their knowledge.

It is a bastard rite with no Apostolic pedigree whatsoever – even though its architects strategically stole certain elements from tradition to give it the appearance of Catholicity.

As far as I’m concerned, Cardinal Dew’s “creative initiative” isn’t the least bit out of keeping with the “spirit of the new liturgy;” rather, it fits like hand-in-glove.

The Mass as Divine warning