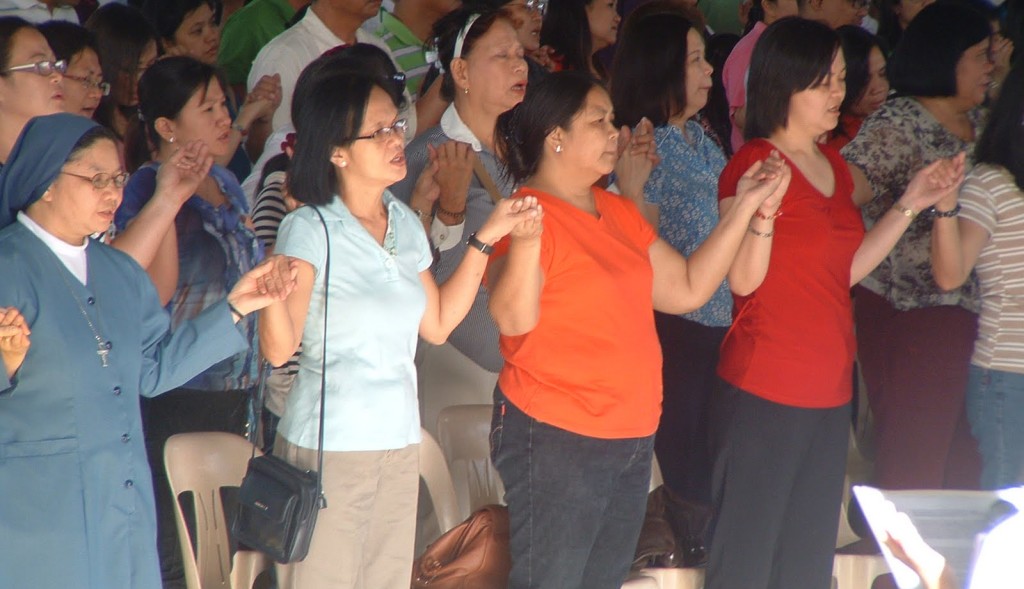 Last week, the on-going Bergoglian “catechesis” on the Novus Ordo was largely unremarkable; so much so that I saved commentary on it until today.

The most noteworthy portion of that lesson in modernism concerned Francis’ comments on the Our Father wherein he repeatedly hailed its ability to stir up pious sentiments within the assembly:

This is not one of many Christian prayers, but it is the prayer of the children of God: it is the great prayer that Jesus taught us. In fact, delivered to us on the day of our Baptism, the “Our Father” makes those same feelings resonate in us. They were in Christ Jesus.

Yes, that’s it! You see, Jesus had sentimental feelings as befitting a child of God, and by golly, we should too!

The fundamental error here is obvious: Baptism does not engender “feelings” of Divine sonship; in addition to making that sonship real, it imparts the theological virtues of faith, hope and charity.

Francis went on to demonstrate how little stock he puts in the first of these virtues.

How many times there are people who say “Our Father”, but do not know what they say. Because yes, it is the Father, but do you feel that when you say “Father”?

Forget believing that we are children of God, we must “feel” it.

When we pray the “Our Father”, we connect with the Father who loves us, but it is the Spirit who gives us this connection, this feeling of being children of God.

Get that? The Holy Ghost leads us not into all truth, but into all emotion.

Pope St. Pius X identified this nonsense as part and parcel of “Modernism and All the Heresies,” and he condemned it in no uncertain terms as the enemy of truth and even of reason itself, stating:

For all these fantasias on the religious sentiment will never be able to destroy common sense, and common sense tells us that emotion and everything that leads the heart captive proves a hindrance instead of a help to the discovery of truth. (Pascendi Domini Gregis – 39)

So much for last week’s Bergoglian assault on the Catholic faith.

At the General Audience earlier today, the offensive continued as Francis declared:

If nothing else, he is consistent.

Readers may recall the observation that we made concerning the first of these wretched General Audiences focusing on the Mass:

Pay close attention to what Francis has done: He has constructed a foundation for the catechesis to follow upon the false idea that to assist at Sunday Mass necessarily entails receiving Holy Communion – with the implication being, every Sunday.

Sure enough, today he returned to this false notion with even greater emphasis; suggesting that assistance at Holy Mass apart from receiving Holy Communion is no better than simply staying home.

This mindset forms an integral part of Amoris Laetitia and the Bergoglian attack against the Church’s bi-millennial practice concerning those in invalid civil marriages.

It also directly contradicts the directive given to pastors in Familiaris Consortio:

They [the “divorced and remarried”] should be encouraged to listen to the word of God, to attend the Sacrifice of the Mass… (FC 84)

By contrast, Francis is encouraging those who are not properly disposed to receive Holy Communion to just sleep in. This, I suppose, is what passes for “accompaniment” in the brave new world of newchurch.

As in previous weeks, Francis made it a point to confirm the Protestants in their errors; for one, by suggesting that Holy Mass is a recreation of the Last Supper:

In fact, the gesture of Jesus who gave his disciples his Body and Blood in the Last Supper, continues today through the ministry of the priest and deacon, ordinary ministers of distribution to the brothers of the Bread of life and the Cup of salvation.

For good measure, he also tossed in a few more Mass as “meal” references:

In the Mass, after having broken the consecrated Bread, that is the body of Jesus, the priest shows it to the faithful, inviting them to participate in the Eucharistic banquet. We know the words that resonate from the holy altar: “Blessed are the guests at the Lord’s Supper…”

In it [the prayer after Communion], on behalf of everyone, the priest turns to God to thank him for making us his guests…

The Church strongly desires that the faithful also receive the Body of the Lord with hosts consecrated in the same Mass; and the sign of the Eucharistic banquet…

With regard to the latter, it must be said that it is not  “the Church” that desires as much, but rather was it the desire of the architects of the protestantized Novus Ordo rite.

On this point, the Ottaviani Intervention states:

In the insistent recommendation to distribute in Communion the Species consecrated during the same Mass, indeed to consecrate a loaf for the priest to distribute to at least some of the faithful, we find reasserted a disparaging attitude toward the tabernacle, as toward every form of Eucharistic piety outside of the Mass. This constitutes yet another violent blow to faith in the Real Presence as long as the consecrated Species remain.

With staggering numbers of self-identified, Mass-going, Catholics expressing doubt as to the Real Presence, no well-informed person of good will can deny that Cardinal Ottaviani et al. were entirely correct.

Indeed, this is the solitary benefit of these General Audiences; namely, to demonstrate beyond any doubt whatsoever that participation in the Novus Ordo Missae poses a grave danger to one’s faith; with Jorge Bergoglio, he who refuses to bend his knee before Christ in the Most Holy Eucharist, being a prime example.

If you find these weekly examinations of the Novus Ordo  helpful,

What the Catholic Hierarchy Should Know About Clerical Pederasty