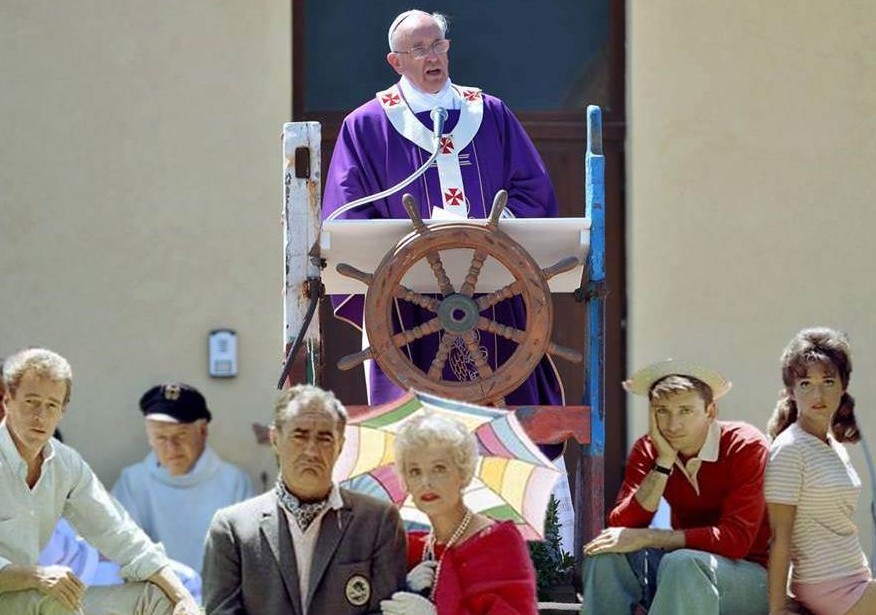 At the General Audience on November 8, Francis announced that he intends to offer a teaching on Holy Mass in the weeks ahead.

In doing so I hope to provide a more traditional (aka Catholic) catechesis for those readers who may benefit from it or perhaps know of others who will.

What I expect to encounter from Francis in the coming weeks are a number of important truths comingled with half-truths, errors, and noteworthy omissions, the sum total of which will leave the faithful with a deficient, and likely a quasi-Protestant, understanding of what Holy Mass truly is.

Already in the first sentence, a red flag has been raised:

We begin today a new series of catechesis, which will look at the “heart” of the Church, that is, the Eucharist. It is fundamental for us Christians to understand well the value and meaning of the Holy Mass to always live more fully our relationship with God.

[NOTE: At present, the complete audience is available only in Italian. Here I will provide my own translation as best I can, recognizing that there may be room for improvement in certain places. If and when necessary, I will alert reads to important clarifications.]

So, what makes the introductory sentence above suspect?

A fundamental and widespread error among even the most devout of Novus Ordo Catholics, priests as well as laity, is to equate, for all intents and purposes, Holy Mass with the Eucharist, and that is precisely what is taking place here.

The Holy See (and Francis) is billing this new series as a multi-part treatment on “La Santa Messa” – the Holy Mass. And yet, the introductory words indicate that it is “a new series of catechesis, which will look at … the Eucharist,” as if the two are strictly interchangeable.

This mindset, which again, is very common today, serves to distort one’s perception of the true nature of the Mass.

Francis reinforced the misconception in various ways as he continued:

We cannot forget the great number of Christians who, throughout the world, in two thousand years of history, have endured death to defend the Eucharist; and those who, even today, risk life to participate in Sunday Mass.

To be clear, in so speaking, Francis is not simply saying that participation in Sunday Mass is to “celebrate the Eucharist,” a phrase he later invokes.

Rather, he makes it quite clear that he is speaking of reception of the Eucharist.

Does Amoris Laetitia come to mind?

Francis says of those Christians facing persecution in the fourth century:

In fact, Jesus told his disciples: “If you do not eat the flesh of the Son of Man and drink his blood, you have no life in you. He that eateth my flesh and drinketh my blood hath eternal life, and I will raise him up in the last day “(Jn 6: 53-54).

Pay close attention to what Francis has done: He has constructed a foundation for the catechesis to follow upon the false idea that to assist at Sunday Mass necessarily entails receiving Holy Communion – with the implication being, every Sunday.

I have little doubt that some of our more “conservative” readers do not as yet see the problem.

I would remind them that while the first precept of the Church (according to the 1992 Catechism of the Catholic Church) reads, “You shall attend Mass on Sundays and holy days of obligation and rest from servile labor” (CCC 2042), the third precept reads:

“You shall receive the sacrament of the Eucharist at least during the Easter season.” (ibid)

As most regular readers of this space are well aware, there is no contradiction between these two precepts. We’ll return to the danger associated with the misconception under discussion momentarily.

Francis went on to pay tribute, of course, to the Second Vatican Council, saying that it was necessary to implement “with the guidance of the Holy Spirit, an adequate renewal of the liturgy.”

He went on to say that the Council Fathers emphasized “the liturgical formation of the faithful.”

This is true, or half-true in any case as the Council also stressed the necessity of providing liturgical instruction to priests, that they may “understand ever more fully what it is that they are doing when they perform sacred rites.” (cf. Sacrosanctum Concilium 18)

Indeed, it is necessary for all of us to grow in our awareness of what Holy Mass truly is. I would point out, however, that the Council Fathers were speaking of the Traditional Latin Mass – the one they celebrated daily; not the Novus Ordo Missae – the same of which Cardinal Ratzinger wrote:

We abandoned the organic, living process of growth and development over centuries, and replaced it [the Traditional Roman Rite] — as in a manufacturing process — with a fabrication, a banal on-the-spot product.” (Cardinal Josef Ratzinger, Preface to “The Reform of the Roman Rite” by Msgr. Klaus Gamber)

Be that as it may, let’s bear in mind that Francis intends to form the faithful in the “fabrication” as he went on to say:

Many times we go there [to Mass], we look at things, we chat with others while the priest celebrates the Eucharist … and we do not celebrate near him.

Well, at least he didn’t say “we do not celebrate with him,” as if to make explicit the decidedly post-conciliar idea that Mass without the people is somehow deficient.

In any case, he went on to address those who are distracted at Mass, or might even say, “Father, the Masses are boring,” or more specifically, “the priests are boring.”

Ah, convert the priests, but it is the Lord who stays there!

In this, Francis is providing a key insight into the nature of the Novus Ordo.

The rite itself demands of the priest a certain “liturgical stage presence” as I like to call it; i.e., a manner of speaking, moving, and acting that will presumably engage the faithful and stir within them what amounts to pious emotions.

Even the most ardent supporter of the new Mass will plainly admit that the personality of the priest weighs very heavily on their liturgical “experience.”

In fact, pretty much every Novus Ordo Catholic I have ever known has taken steps to avoid the Mass of Fr. Dullard in favor of that of Fr. Festive, or Fr. Funny, or Fr. Finocchio or whomever their own particular favorite “presider” might be.

Speaking of this, Francis asks:

Why at a certain point does the priest presiding over the celebration say, “Lift up your hearts”?

The priest as presider; precisely what Cardinal Ottaviani warned Pope Paul VI would happen should he promulgate the new Mass:

Not a word do we now find as to the priest’s power to sacrifice, or about his act of consecration, the bringing about through him of the Eucharistic Presence. He now appears as nothing more than a Protestant minister.

In conclusion, as promised, let’s briefly touch on the danger associated with not just equating Holy Mass with the Eucharist, but on what we might more properly consider a hyper-focus on receiving the Eucharist at Mass – the same, which let us not forget, Francis plainly encouraged by way of his so-called “catechesis.”

There isn’t a “conservative” Catholic alive who hasn’t lamented certain deficiencies in the way the Novus Ordo Mass is offered; from outright liturgical abuses to all manner of liturgical laxities and liberties.

For many, finding that elusive “reverent Novus Ordo”  is as daunting a task as hunting down Big Foot, and so ultimately they must comfort themselves with the idea, “Well, at least I can receive the Eucharist!”

This mindset is such that the importance of the rite itself – how it is conducted and what it communicates by way of its tangible signs – becomes all but negligible, with the Mass being nothing more than a necessary vehicle, oftentimes endured as much as it is edifying, for receiving Holy Communion.

By this measure, admission to a hospital where one might receive a sick call is sometimes preferable!

The problem with minimizing the importance of the rite is well summed-up in the phrase, “lex orandi statuat legem credendi” – the law of prayer establishes the law of belief.

As Cardinal Ottaviani rightly foresaw, the Novus Ordo has undeniably led to a loss of Catholic faith.

It is often said by “conservative” clergy and faithful alike that the reason so many self-identified Catholics don’t know their faith is due to the lack of good catechesis over the last 50 or so years.

While it is true that catechesis has been lacking, what is almost always overlooked is that the law of prayer in this case has established the deficient law of belief that is so prevalent in our day.

The Real Presence of Jesus Christ in the Most Holy Eucharist is a prime example.

Consider how often recent popes have clearly taught the doctrine of the Real Presence, as have countless bishops, priests and religious educators.

And yet, in spite of this, survey after survey of Mass-going Catholics reveals a stunning disbelief in the Lord’s Real Presence in the Eucharist.

The reason is simple: The Novus Ordo rite does not establish this belief; in fact, it establishes the contrary, and it is far more effective in forming the people than any papal encyclical, sermon or text book ever will be.

We have covered enough for today. We’ll resume this examination of Francis’ new series next week, God willing!

You fill up my senses