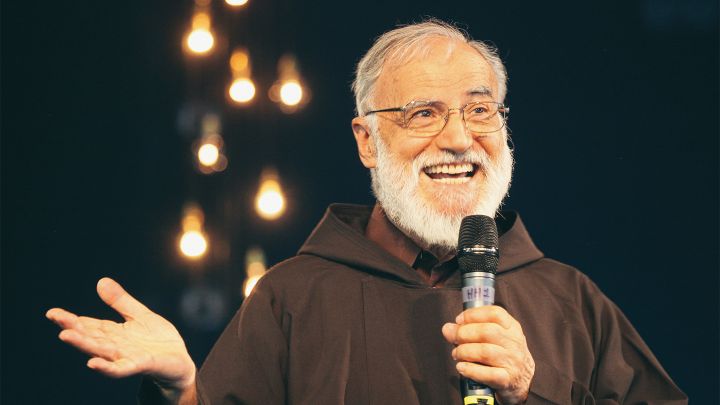 On Good Friday of 2013, Preacher of the Pontifical Household, Fr. Raniero Cantalamessa, O.F.M. Cap., delivered a sermon during the celebration of the Passion of the Lord in St. Peter’s Basilica.

In attendance, of course, was his new boss; Francis, the austere Argentinian in beat-up shoes whose humility-on-parade program was running full tilt to the delight of many an anti-triumphalist.

Among the pearls of wisdom offered by Cantalamessa that day included the following:

We know what the impediments are that can restrain the messenger: dividing walls, starting with those that separate the various Christian churches from one another, the excess of bureaucracy, the residue of past ceremonials, laws and disputes, now only debris.

As I said at the time, you can be certain that Cantalamessa wouldn’t have equated “past ceremonials” with “debris” in the presence of Benedict XVI.

Earlier today, Fr. Cantalamessa, who is perhaps more appropriately called Puppet of the Pontifical Household, once again tickled the ears of his liege; this time with a sermon subtitled:

The Fifth Centenary of the Protestant Reformation, an Occasion of Grace and Reconciliation for the Whole Church

The Holy Spirit enlightens us on the important question of justification by faith for sinners. I believe that trying to shed light on history and on the current state of that discussion is the most useful way to make the anniversary of the Fifth Centenary of the Protestant Reformation an occasion of grace and reconciliation for the whole Church.

To hear Cantalamessa speak, one would think that the Holy Catholic Church is still grappling with “the important question of justification.”

In reality, the Council of Trent (Session VI) answered that “question” in a definitive way when it pronounced on the Doctrine of Justification; issuing no less than thirty-three Canons anathematizing the errors that arose directly from said “Reformation” (more appropriately, Revolt).

That, however, is obviously not enough for Cantalamessa; rather, for him (and no doubt his superior-in-white), enlightenment is to be found elsewhere:

It was here that suddenly Paul’s word in Romans 1:17 flashed through his mind: “The just shall live by faith.” It was a liberating experience.

Liberating? Perhaps, but surely it was not God who released Luther from the bond of fidelity to the Church; “free” to corrupt the sure doctrine of the Faith even to the point of excising from Sacred Scripture that which exposed the folly of his personal opinions.

Ambivalent to this reality, Cantalamessa cited “the whole passage from the Letter to the Romans” on justification (Rom 3:21-28). He then asks rhetorically:

How could it have happened that such a comforting and clear message became the bone of contention at the heart of western Christianity, splitting the Church and Europe into two different religious continents?

First, it must be said that the question itself is tantamount to a lie as the message actually conveyed in St. Paul’s Epistle to the Romans was not the source of “contention.”

That said, allow me to take a stab at an answer:

Maybe the split happened because Luther took it upon himself to insert the word “alone” into Romans 3:28 so that it would fit more comfortably with his newfound “liberation” by reading, “For we hold that a man is justified by faith alone apart from works of law.”

And this in spite of the fact that the Epistle of St. James (2:20) states that “faith without works is dead,” which is one of the reasons why Luther dismissed it as an “epistle of straw.”

Even Ulrich Zwingli, whom Cantalamessa called “another great reformer,” said that Luther’s bible was “a corruption of the Word of God.”

Not so, according to the Friar, who said that Luther’s efforts resulted in:

…an unquestionable improvement in the quality of Christian life, thanks to the circulation of the word of God in the vernacular, to numerous inspired hymns and songs, and to written aids made accessible to people by the recent invention of the printing press and distribution of printed materials.

Then again, maybe the “bone of contention” had something to do Luther declaring himself “a doctor above all the doctors of Popedom” when he was challenged for his audacity in crafting Scripture according to his personal views.

Or perhaps the split in the Church took place because the prideful Luther denigrated the centerpiece of Catholic life, the Holy Sacrifice of the Mass, calling it an “abomination.”

In any case, Cantalamessa went on to criticize western Christianity for becoming “a gloomy proclamation, completely focused on sin, that the secular culture ended up resisting and rejecting.”

The way forward, in his view, is to embrace “the enrichment brought by the Reformation,” and “allowing all of Christianity to benefit from its many important achievements.”

Fr. Cantalamessa has apparently been so enriched, proclaiming in perfectly Protestant fashion:

The most important thing is not what Jesus, by his death, has removed from human beings—sin—but what he has given to them, that is, his Holy Spirit.

Oh, how this must have pleased His Humbleness (not to mention the Evil One) given his propensity for stripping the Sacrament of Confession of its singular importance, and even going so far as to equate it with the Lutheran practice of privately going “before the Lord and asking for forgiveness.”

In all of this, even the neo-conservatives will find cause for looking upon Fr. Cantalamessa with disgust and pity; as a man so devoid of authentic Catholic conviction that he will regurgitate whatever most pleases le pape du jour.

If so, that’s terrific, but I have to ask:

Is Raniero Cantalamessa really all that different than the ecclesial superstars who dare not plainly condemn the Bergoglian heresies and blasphemies for what they truly are; preferring instead to tiptoe around the obvious?

Is one allowed to doubt what the Roman Catechism says?