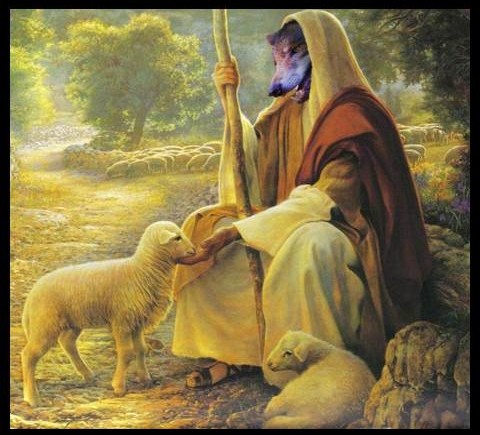 It is not infrequently that the Mass propers call to mind the present situation in the Church in some way or another, but this past Sunday (the Seventh Sunday of Pentecost) this was the case, at least for me, more pointedly so than certain others.

It began at the Collect:

O God, whose providence faileth not in its designs, we humbly entreat Thee: put from us all that might be harmful, and give us all that will be profitable.

Is there any so harmful in our day, not just to the faithful, but to the world at large, as the man widely accepted as the Vicar of Christ?

As should be perfectly clear to those who hold the Catholic faith and understand that the greatest good to be had is salvation, this is a rhetorical question and not in the least bit intended to be taken as mere hyperbole.

As such, though many a Catholic (in particular those cut from “conservative” cloth) would perhaps shudder to do so, is it not meritorious for us to make this venerable prayer our very own? (Again, a rhetorical question.)

O God, whose providence faileth not in its designs, we humbly entreat Thee: put from us this dangerous man, Jorge Bergoglio, and give us all that will be profitable.

And yet, we mustn’t stop there. As has been stated many times in this space, “Francis” (as he is known) is a major problem, but he is not the problem. Therefore:

O God, whose providence faileth not in its designs, we humbly entreat Thee: put from us the false and misleading Council known as Vatican II, the Novus Ordo Missae that it inspired, and all who labor to press them upon Your people, and give us all that will be profitable.

Even so, there is only one real solution to the many societal ills of our day, and that is Truth incarnate, Christ the King, and the Holy Catholic faith that He Himself established.

And then came the Gradual at Sunday’s Mass:

Come, children, hearken to me; I will teach you to fear the Lord. Come ye to Him and be enlightened, and your faces shall not be confounded.

In context, the word “confounded” in this verse (taken from the Psalms) is best understood as “ashamed,” but the more common usage suggests confusion and bewilderment.

Whether it be in reference to written texts like Amoris Laetitia, commentary on a plethora of topics ranging from homosexuality to Hell, or the hidden agendas of Synods that have yet to take place, how often we hear it said that Francis sows confusion.

At times, we’ve even heard it suggested in traditional circles (by those who should surely know better) that Francis’ major faults are “weakness, innuendo or ambiguity;” as if he is guilty of little more than creating confusion among the faithful as opposed to actively leading the Church into error.

In all cases, it seems as if the Gradual (i.e., God’s word) is telling us that the reason so many are confounded by Francis is that they lack, in some degree, an appropriate fear of the Lord.

More specifically in the present case, there appears to be a lack in that awe inspiring awareness of God’s majesty, purity and holiness; the same that naturally gives rise to an abhorrence of heresy and other affronts to His infinite goodness.

In A Passiontide reflection on heresy, written by his Fr. Frederick William Faber (28 June 1814 – 26 September 1863), one gets a sense for the relationship between fear of the Lord and heresy:

The crowning disloyalty to God is heresy. It is the sin of sins, the very loathsomest of things which God looks down upon in this malignant world. Yet how little do we understand of its excessive hatefulness! It is the polluting of God’s truth, which is the worst of all impurities. Yet how light we make of it! We look at it, and are calm. We touch it and do not shudder. We mix with it, and have no fear. We see it touch holy things, and we have no sense of sacrilege. We breathe its odor, and show no signs of detestation or disgust.

Yes, today, many of us seem to “mix with” (i.e., tolerate) the heresy that is flowing out of Rome and elsewhere like so much refuse; showing relatively little fear, both of it and the Lord, as demonstrated by a willingness to relegate these attacks against the Truth to mere ambiguity and confusion; thereby downplaying its offensiveness in light of God’s greatness.

With this in mind, it is imperative for all of us in this age of diabolical disorientation, and I include myself first and foremost, to pray for an increase in the gift of the Holy Ghost that is fear of the Lord.

And then came the Gospel at last Sunday’s Holy Mass:

At that time, Jesus said to His disciples: “Beware of false prophets, who come to you in the clothing of sheep, but inwardly they are ravening wolves. By their fruits you shall know them. Do men gather grapes of thorns, or figs of thistles? Even so every good tree bringeth forth good fruit, and the evil tree bringeth forth evil fruit. A good tree cannot bring forth evil fruit, neither can an evil tree bring forth good fruit. Every tree that bringeth not forth good fruit, shall be cut down, and shall be cast into the fire. Wherefore by their fruits you shall know them. Not every one that saith to me, Lord, Lord, shall enter into the kingdom of heaven: but he that doth the will of my Father who is in heaven, he shall enter into the kingdom of heaven. (Matt. 7:15-21)

While we stop short of judging the interior disposition of anyone’s soul, which is the prerogative of God alone, we can “know” who the false prophets are among us:

They are those who say “Lord, Lord,” but whose fruits – plainly observable in an objective sense – are evil.

Again, my thoughts turned to this Francis that we’ve been discussing. What are his fruits?

– An increase in Eucharistic sacrilege even to the point where Cardinals and bishops are encouraged to institutionalize it.

– An increase in acceptance of homosexuality both within and outside of the Church.

– An increase in respect, honor and deference for the godless opinions of heathens, heretics, Jews, Muslims, earth worshipers, proponents of abortion, and euthanasia, etc.

– A full blown assault on marriage and family.

– A practical abrogation of mortal sin.

– Outright blasphemy that paints mortal sin as God’s will, and Divine Law as impossible for some to keep.

Each of these “fruits” are objective realities, plainly visible and right before our very eyes.

We could go on to list far more evil Bergoglian fruit, and I invite you to do so below if you’re so inclined.

And why should we even bother to consider such things?

Not for spite or for boasting or any such thing, but in order to warn the ignorant; i.e., those who cannot see beyond the sheep’s clothing to the false prophet who is lurking beneath.

All glory and honor to God, however, my next thought; a far more important one – was to ask myself, “What are my own fruits?”

And it occurs to me – if any among us should find that particular examination a walk in the park, then either great virtue or great delusion is present.

May it please the Lord to grant us greater insight into the will of our Father who is in heaven, and the grace to make it our own.

Montini vs Bergoglio: Better or worse?