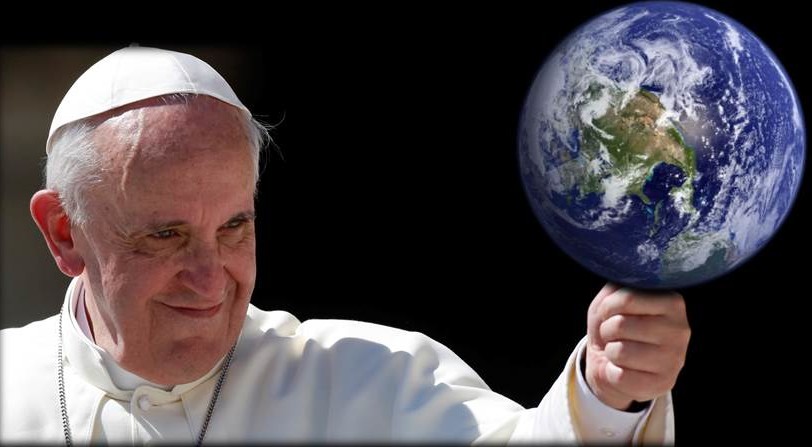 Earlier today, His Humbleness addressed “The International Conference Marking the 3rd Anniversary of Laudato Si’,” encouraging those in attendance to hear “the increasingly desperate cries of the earth and its poor” and to meet “the urgent need to respond to the Encyclical’s call for change, for an ecological conversion.”

A load of Bergoglian garbage, you say?

Well, yes, but it’s not his garbage, per se; Francis (as he likes to be called) is just the trash man du jour as he himself acknowledged later in the address when he gave credit to John Paul the Great Ecumenist who first issued that call back in 2001.

In context, the Polish pope said:

Unfortunately, if we scan the regions of our planet, we immediately see that humanity has disappointed God’s expectations. Man, especially in our time, has without hesitation devastated wooded plains and valleys, polluted waters, disfigured the earth’s habitat, made the air unbreathable, disturbed the hydrogeological and atmospheric systems, turned luxuriant areas into deserts and undertaken forms of unrestrained industrialization, degrading that “flowerbed” – to use an image from Dante Alighieri (Paradiso, XXII, 151) – which is the earth, our dwelling-place.

We must therefore encourage and support the “ecological conversion” which in recent decades has made humanity more sensitive to the catastrophe to which it has been heading.

It’s always the same with these humanists and their earthbound causes; rallying the masses with a near endless flow of hyperbole in order to create a frenzied sense of urgency.

Even as John Paul II spoke, contrary to his claim that the environment was being devastated with neither restraint nor hesitation by the industrialized nations of the world, the same were investing in technological advances that would make more efficient use of the planet’s natural resources, lead to an improved quality of life for many of its poorest inhabitants, while also lowering humankind’s impact on “our dwelling-place.”

For example, 2001 was the very year that the first mass-produced hybrid automobile, the Toyota Prius, hit the marketplace.

As for the plight of the poor, one would think based on Francis’ constant drumbeat about income disparity and poverty that the trend is decidedly downward. Not so.

On any given day, the number of people worldwide living in extreme poverty:

A.) Rises by 5,000, because of climate change, food shortages and endemic corruption.

B.) Stays about the same.

We know how the Bergoglians would answer, but Kristof reveals:

Polls show that about 9 out of 10 Americans believe that global poverty has worsened or stayed the same. But in fact, the correct answer is C. Every day, an average of about a quarter-million people worldwide graduate from extreme poverty, according to World Bank figures.

This is the New York Times!

About that so-called “climate change” problem, Francis said in his address:

All governments should strive to honor the commitments made in Paris, in order to avoid the worst consequences of the climate crisis … We cannot afford to waste time.

Putting an ersatz religious spin on his eco-mania, he said:

Here we can think back on the call that Francis of Assisi received from the Lord in the little church of San Damiano: “Go and repair my house, which, as you can see, lies in ruins”. Today, the “common home” of our planet also needs urgently to be repaired and secured for a sustainable future.

In truth, as told by St. Bonaventure in a biography of St. Francis:

Francis began zealously to repair the church materially, although the principle intention of the words referred to that Church which Christ purchased with his own blood, as the Holy Spirit afterward made him realize.

Church, smurch… who needs it? Not Francis, who went on to invoke the “climate / environmental / ecological crisis” three more times in his brief address even though the cat’s well and truly out of the bag – there is no crisis.

Al Gore, the Nobel Prize winning purveyor of global warming hysteria, whose personal carbon footprint is the size of several small towns put together, is a laughingstock among all but the most deluded for his laundry list of failed predictions of environmental doom.

More noteworthy are the scientists whose voices will no longer be silenced; men like Richard Siegmund Lindzen, an atmospheric physicist known for his work in the dynamics of the atmosphere, atmospheric tides, and ozone photochemistry, who said in a recent interview:

The mostly non-scientist proponents of climate hysteria realize that distant forecasts of remote problems by inadequate models are unlikely to motivate people to shut down modern industrial society. They, therefore, attempt to claim that we are seeing the problems right now. Of course, the warming that has occurred over the past 200 years or so has been too small to have been a major factor. However, objective reality matters little when it comes to propaganda – where repetition can effectively counter reality.

The Bergoglians, however, are undeterred, and we were given a hint as to the reason when Jorge said, “All governments should strive to honor the commitments made in Paris…”

Their motives were made all the more clear when the Ringleader in Rome went on to say:

Along with states, local authorities, civil society, and economic and religious institutions can promote the culture and practice of an integral ecology.

You see, eliminating poverty and caring for Mother Earth are not the real goals of conciliar madmen like Wojtyla, Bergoglio, and Ratzinger for that matter; those are but rallying cries used to stir the emotions of the ignorant and the faithless as a means toward attaining the ultimate prize – a one-world government that will have oversight over a one-world religion.

[NOTE: Subscribers to The Catholic Inquisitor, the inaugural issue of which goes out in the mail on July 10, will be treated to an in-depth treatment of the “one-world religion” masterfully written by Cornelia Ferreira.]

See the Church in disarray.