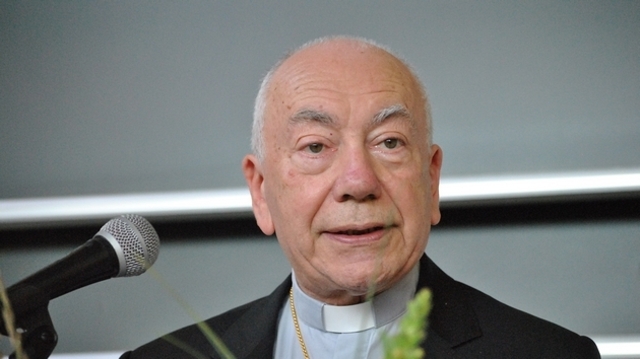 We are told to watch for a press conference tomorrow focused on Amoris Laetitia. It is said to be the official reply to the four cardinals’ dubia, which will be answered by Cardinal Francesco Coccopalmerio, President of the Pontifical Council for the Interpretation of Legal [Legislative] Texts.

As the Rorate post suggests, this supposed “official reply” may coincide with the release of a book written by Cardinal Coccopalmerio on Amoris Laetitia at Francis’ request, which contains the following excerpt:

The divorced and remarried, de facto couples, those cohabiting, are certainly not models of unions in sync with Catholic Doctrine, but the Church cannot look the other way. Therefore, the sacraments of Reconciliation and of Communion must be given even to those so-called wounded families and to however many who, despite living in situations not in line with traditional matrimonial canons, express the sincere desire to approach the sacraments after an appropriate period of discernment…

Assuming that Rorate’s sources are accurate (and I think that likely), the choice of Coccopalmerio is rather interesting.

Coccopalmerio, incidentally, was given his current position by, and received the red hat from, Benedict the Abdicator, who hasn’t made a peep in defense of the Faith since the scourge on the Church known as Francis came on the scene.

In any case, the above mentioned quote is of interest to be sure, but it only serves to indicate that Francis, just as one might expect, has chosen a spokesman who agrees with his position. No surprise there.

Far more noteworthy concerning the choice of Coccopalmerio is that Francis has apparently decided that it is now opportune to present Amoris Laetitia, at least in some substantial measure, as a “legislative text.”

This “maneuver” is quite possibly is the best strategy that Team Bergolgio, after months of deliberation, could muster in the face of the dubia.

It would seem that Francis & Co. may believe that entering a plea of “not guilty” based on the notion that Amoris Laetitia is intended to be viewed as a “legislative text” (as opposed to a “doctrinal text”) will somehow provide a “legal defense” capable of excusing His Humbleness from the charge of notorious heresy.

If so, it is an embarrassingly lame defense indeed.

Intent simply has no bearing on whether or not the text of Amoris Laetitia is blasphemous and heretical; either it is objectively so or it is not.

It is also an eminently predictable strategy coming from the author of Amoris Laetitia – a document that presumes to suggest that intent – specifically, the intent to avoid “further sin” – somehow renders adultery something other than mortal sin. (cf AL 301)

According to the Profile of the Pontifical Council for Legislative Texts:

As part of the interpretative function, [the Council] is responsible, first to propose the Authentic Interpretation confirmed by pontifical authority, the universal laws of the Church, that is, the laws that concern the entire Latin Church and common laws to all the Eastern Catholic Churches.

In the case of Amoris Laetitia, the following universal laws are, in fact, called into question:

“Persevering in manifest grave sin serves as an obstacle to the sacraments.” (cf Canons 915, 1007)

“To receive the salvific remedy of the sacrament of penance, a member of the Christian faithful must be disposed in such a way that, rejecting sins committed and having a purpose of amendment, the person is turned back to God.” (Canon 987)

If indeed Cardinal Coccopalmerio intends to suggest that the “authentic interpretation” of said canons, “confirmed by pontifical authority” as set forth in Amoris Laetitia, allows for those who persist in adultery with no purpose of amendment to approach the sacraments of Confession and Holy Communion, and yet the doctrine of the faith remains untouched, don’t you believe it.

From day one, the proponents of the Kasperian Solution have been insisting that pastoral practice and doctrine are somehow independent of one another, to which Cardinal Muller rightly said (prior to whatever threats caused him to state that “it is not Amoris Laetitia that has provoked a confused interpretation”):

Each division between ‘theory’ and ‘practice’ of the faith would be a reflection of a subtle Christological heresy.

The same can be said of legislative texts and doctrine.

The bottom line here is rather simple:

As I (and certainly others) have been saying all along, the matter of Holy Communion for those in so-called second marriages is not the most pressing matter with respect to Amoris Laetitia; rather, this is but a result of the document’s most basic error – namely, the false idea that it is possible for a priest and an individual to effectively judge the interior disposition of soul in such way as to exculpate one of the mortal sin of adultery.

(Then there is the blasphemous notion that God desires men to persist in adultery!)

If this is true, then there is no such thing as mortal sin practically speaking; not only with respect to adultery, but also with regard to abortion, homosexual activity, or any such thing.

Lost along the way is any sense of the existence of intrinsic evil, and ultimately, the very notion of infallible teaching.

Man having putting himself in the place of God, the Author of the Divine Law; a problem that runs much deeper than Amoris Laetitia alone, in fact, going right back to the Council.

The choice of Cardinal Coccopalmerio also serves as a clear indication that the supposed “official response” to the dubia will not be given in the form of a simple “yes” or “no” – the only answers necessary in such matters – rather, it is going to be given in essay form; replete with deception, subtleties and nuance (an art form among the modernists).

If either of those two words (“yes” or “no”) are actually uttered in response to the five questions that make up the dubia, there can be little doubt that they will immediately be followed by a qualifier: but, however, and yet…

All of this having been said, no matter what Coccopalmerio says, it will not suffice to render Francis innocent of the charges of heresy.

After all, the dubia is addressed directly to him for a reason; it is Francis himself and his membership in the Body of Christ about which there are doubts, not the doctrines stated in the questions.

As I wrote the day that the dubia was made public; Francis has been put on public trial. His failure to appear only serves to confirm his rejection of divinely revealed truth, and we all know what that means…

If indeed the scenario described above comes to pass, there can no longer be any dubia whatsoever that Jorge Mario Bergolgio is a formal heretic.

I, for one, cannot wait for the sun to rise tomorrow. God willing, I will be here to discuss whatever happens further.