Home
Blog Post
Dubia: Are you prepared for the answers? 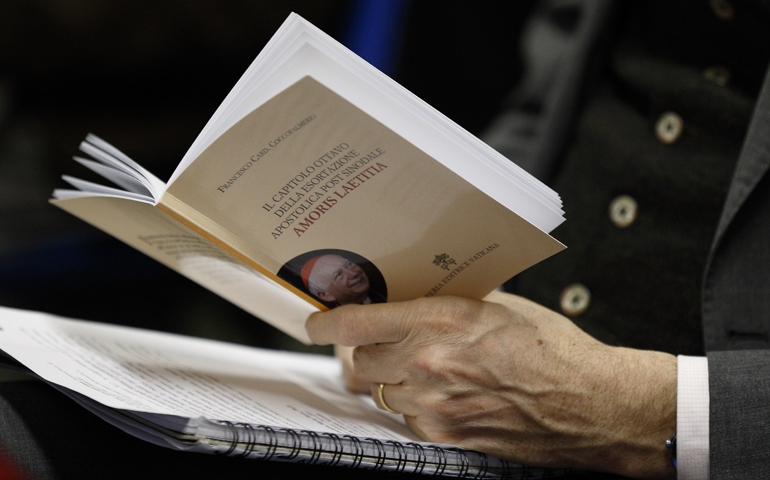 So, yesterday’s Rorate Caeli post reporting that Cardinal Francesco Coccopalmerio was going to deliver what “is said to be the official reply to the four cardinals’ dubia” at a press conference today ended up being a false alarm.

The press conference, which was a presentation of the cardinal’s book on Amoris Laetitia, written at Francis’ behest, still happened; it’s just that Cocco was a no-show due to a supposed scheduling conflict.

According to Edward Pentin, presenters at the conference said that the book “is not a response to the dubia, just his [Coccopalmerio’s] own pastoral reflections.”

An update posted at Rorate this morning stated:

We thank the Holy Ghost, Supreme Protector of the Orthodoxy of the Church of Rome — and Coccopalmerio surely noticed His presence, as President of the Pontifical Council for the Interpretation of Legal Texts, in an official Vatican press conference, could surely be interpreted as an official response on the potential heterodox matters present in Amoris Laetitia and currently being questioned for clarification.

“Potential heterodox matters?” Really? Like the idea that God desires that men should persist in mortal sin?

(Is it just me, or is Rorate losing its grip on reality?)

Then again, maybe the source of yesterday’s report simply got it wrong and the press conference never really was intended to serve as “an official response” to the dubia; something quite understandable given the climate of secrecy, fear and confusion that pervades Bergoglio’s Rome.

In any case, the Rorate update went on to state:

And, as we said yesterday on Twitter, and multiple times before: Are you really prepared for Francis to answer the dubia? Are you truly prepared? Think about it …

First, might I suggest that those who shudder at the very thought of Francis providing answers to the dubia just might be guilty of placing too much confidence in the man himself, and far too little in the Office of Peter and the Holy Ghost, Supreme Protector of the Orthodoxy of the Church of Rome?

It would seem to me that those who are unprepared for the pope to respond to five simple “yes/no” questions – queries that a twelve year old Confirmation candidate should be able to answer in his sleep – have a major problem.

In other words, when the prospect of Francis judging himself a formal heretic and thus no pope at all represents a challenge to one’s faith so immense that the status quo appears preferable, clearly there is a profound lack of sensus Catholicus at play.

Unfortunately, this appears to apply to the majority of the faithful in our day; persons so paralyzed by disorientation and fear that they either cannot, or refuse to, see the bitter reality that is staring them squarely in the eyes:

Francis, in any number of ways, has already answered the dubia!

Setting aside for the present moment his letter to the bishops of Buenos Aires wherein he anointed their implementation with the affirmation, “there are no other interpretations,” and similar directives issued for the Diocese of Rome over which he presides as Ordinary; irrefutable manifestations of his evil intent each…

At the very least, by failing to directly address the dubia with the “yes/no” answers reasonably requested, Francis is plainly asserting the following:

1. It does not matter one way or the other if those who, while bound by a valid marital bond, live together with a different person in a marital way are granted absolution in the Sacrament of Penance and thus to admitted to Holy Communion without fulfilling the conditions provided for by “Familiaris Consortio” n. 84.

2. It does not matter one way or the other if one regards as valid, or not, the teaching found in “Veritatis Splendor” n. 79, based on Sacred Scripture and on the Tradition of the Church, on the existence of absolute moral norms that prohibit intrinsically evil acts and that are binding without exceptions.

3. It does not matter one way or the other if one affirms, or not, that a person who habitually lives in contradiction to a commandment of God’s law, as for instance the one that prohibits adultery (cf. Mt 19:3-9), finds him or herself in an objective situation of grave habitual sin (cf. Pontifical Council for Legislative Texts, Declaration, June 24, 2000).

4. It does not matter one way or the other if one regards as valid, or not, the teaching found in “Veritatis Splendor” n. 81, based on Sacred Scripture and on the Tradition of the Church, according to which “circumstances or intentions can never transform an act intrinsically evil by virtue of its object into an act ‘subjectively’ good or defensible as a choice.”

5. It does not matter one way or the other if one regards as valid, or not, the teaching found in “Veritatis Splendor” n. 56, based on Sacred Scripture and on the Tradition of the Church, that excludes a creative interpretation of the role of conscience and that emphasizes that conscience can never be authorized to legitimate exceptions to absolute moral norms that prohibit intrinsically evil acts by virtue of their object.

Let’s be honest here, folks, it doesn’t take any knowledge of Catholic doctrine whatsoever to connect the aforementioned dots; much less is it necessary for the “proper authorities” to tell us what anyone with common sense can plainly see.

A disinterested observer capable of applying simple logic alone is able to recognize without any question whatsoever that Francis, he who claims to be the Vicar of Christ, is clearly intent on adhering to the position that the fundamental truths reiterated in the dubia are henceforth to be treated as entirely optional (or to use his parlance, gray as opposed to black and white.)

I would remind readers that every Catholic is required to give the assent of faith to the aforementioned truths divinely revealed; i.e., there is no gray.

Obstinately adhering to the erroneous position that said teachings are “gray” and therefore optional, as Francis most certainly is, in itself represents a repudiation of dogmatic truth; i.e., it is heresy – plain, simple and recognizable to all who possess even a basic understanding of Catholic doctrine.

Yes, but does all of this add up to Francis being a formal heretic?

If so, Cardinal Burke, one of the Church’s most eminent canon lawyers, made clear the repercussions:

At this, let’s take a look at a treatment of the topic provided by theologian Dr. John Lamont as recently published at Rorate Caeli.

According to Dr. Lamont, in order for Francis to be considered guilty only of adhering to that which is materially heretical, as opposed to being a formal heretic, one would have to assume that he is simply mistaken:

It would mean that his adherence to these positions is not claimed to be formally heretical, but is taken to be simply erroneous, i.e. to be made in ignorance of the fact that they are rejections of divinely revealed truth. The reason for taking this stand is presumably that any Catholic, and especially the Supreme Pontiff, should be given the benefit of the doubt when they express heretical views, and not be accused of heresy until they uphold these views pertinaciously after being informed that the views are heretical.

Does anyone with even a feeble grip on reality sincerely believe that Francis, after being presented with numerous appeals citing infallible dogmatic teaching, is truly unaware of the fact that his views are heretical?

If this describes you, perhaps you would benefit more from reading Dr. Seuss than akaCatholic, in which case I will give you a moment to log-off…

Those of you who are still tuned-in may find it interesting that Dr. Lamont went on to say [with my emphasis added].

Some might argue that the dubia and other criticisms of Amoris Laetitia that have been made already suffice as warnings to Pope Francis [NOTE: this is my position], and hence that he can now be judged to be guilty of the canonical crime of heresy. These criticisms might be said to make it clear to informed observers that Pope Francis is in fact a heretic rather than simply in error. But for juridical purposes – especially for the very serious purpose of judging a Pope to be a heretic – they do not suffice. The evidence needed for a juridical judgment of such gravity has to take a form that is entirely clear and beyond dispute. A formal warning from a number of members of the College of Cardinals that is then disregarded by the Pope would constitute such evidence.

I am genuinely surprised by how often this comes up: As I found myself repeating many times in my exchange with Robert Siscoe, there is no authority on earth capable of judging the pope; only he can judge and reveal himself as guilty of formal heresy.

As for the idea of a “formal warning,” look, it’s not as if the cardinals can go to the Vatican Personnel Office to file a “Papal Formal Warning Form.”

I am being somewhat facetious, but the fact of the matter is there simply is no formal procedure in place for issuing such a warning. To be more specific, there is no canonical process in place to warn, much less remove, a pope.

With this in mind, I propose to offer my own think about it:

Is it not enough to present, and publicly so, the pope with the opportunity to remove the suspicion of heresy from himself simply by confirming his assent, and the faithful’s obligation to likewise adhere, to five fundamental, divinely revealed truths, the rejection of which (apart from sheer ignorance) removes one from the Body of Christ?

In the light of the fact that Pope Francis has openly endorsed heretical understandings of Amoris laetitia in his letter to the bishops of the Buenos Aires region of Sept. 5th 2016, it is more likely than not that he is in fact a formal heretic.

Perhaps Dr. Lamont is coming around…

Either way, it seems obvious to me simply from private conversations that with every passing day more and more Catholics are coming to the same conclusion that I drew some months ago:

Francis has more than done his part; he has made his will and thus his relationship to the Body of Christ plain for all to see.

May it please Our Lord for the “proper authorities” to formally declare as much so that, as the eminent 18th century theologian Fr. Pietro Ballerini said, “all might be able to be equally on guard in relation to him;” including those who are as yet unprepared to face the present reality head on.