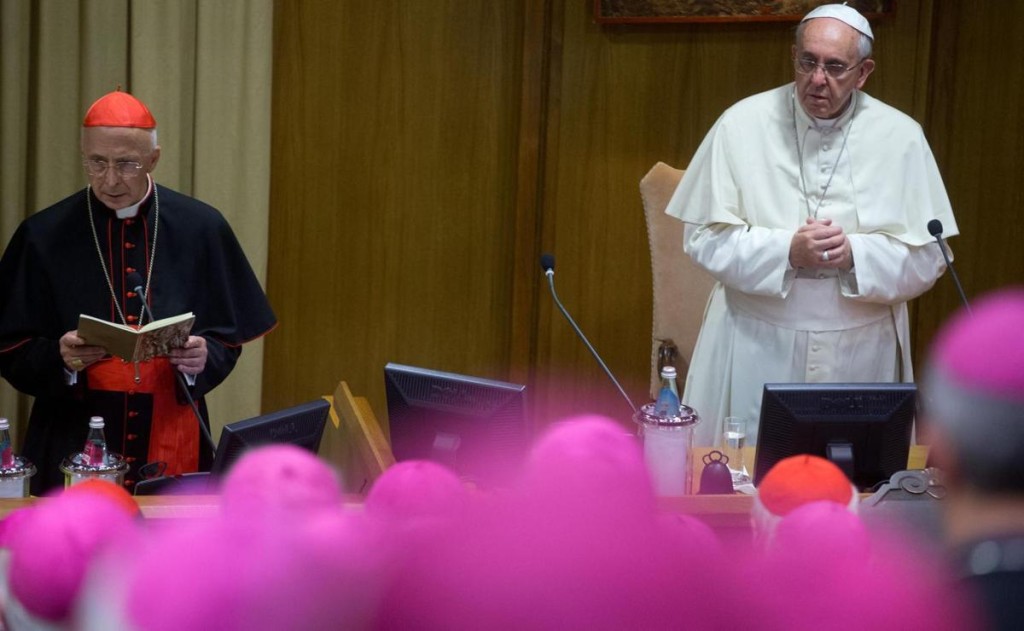 Addressing the opening of the Italian Bishops’ Conference General Assembly on 22 May, Francis implored the gathering:

“The first of these gifts [of the Holy Spirit] is already in the convenire in unum (coming together in unity), willing to share time, listening, creativity and consolation. I hope these days will be crossed by open, humble and frank confrontation.  Do not fear the moments of opposition: entrust yourselves to the Spirit, who opens to diversity and reconciles what is different in fraternal charity.”

As His Humbleness spoke, nearly a month had already passed since he had received a letter written on behalf of the four Dubia Brothers formally requesting an audience in order to, and I quote:

In spite of his appeals for honest and frank confrontation and openness toward opposition, the aforementioned request for an audience had been met with nothing but silence from Francis.

The author of said letter, Cardinal Carlo Caffara, the retired Archbishop of Bologna, was present in the assembly that day, and there can be no doubt that he, more than anyone else, marveled at the magnitude of hypocrisy on display at that moment.

It is also quite likely that Cardinal Caffara understood very well that certain portions of Francis’ address were aimed directly at himself and the three other troublemakers-in-red who had joined him in co-authoring the Dubia.

For instance, His Hypocriticalness declared:

“The Synodal breath and step reveal what we are and the dynamism of communion that animates our decisions. Only in this horizon can we truly renew our pastoral program and adapt it to the mission of the Church in today’s world; only thus can we address the complexity of this time, thankful for the course accomplished and determined to continue it with parrhesia.”

For those with ears to hear, Francis is essentially saying:

Amoris Laetitia is a fruit of the “Synodal” process, which itself is a manifestation of the gifts of the Holy Spirit!

This is what animated the decision to effectively abrogate mortal sin (AL 301), to declare the Divine Law too lofty for some to keep (AL 301), and to accuse God of asking us to persist in adultery (AL 303); thus addressing “the complexity of this time.”

Therefore, let us be “thankful for the course accomplished and determined to continue it with parrhesia.”

In other words, Amoris Laetitia is a done deal. The only dialogue worthy of having concerns how to implement its “pastoral program.” As such, do not expect an audience ordered toward derailing the effort; it’s too late for that now.

From there, Francis continued his address to the bishops (and one wonders if perhaps he even made eye contact with Cardinal Caffara) as he said:

“In reality, this path is marked also by closures and resistances: our infidelities are a heavy mortgage put on the credibility of the testimony of the depositum fidei, a much worse threat than that which comes from the world with its persecutions.

NB: In this, Francis is suggesting that Amoris Laetitia – the origins of which can be traced back through the Synods directly to the Holy Ghost – belongs to the deposit of faith!

As such, men like the Dubia Brothers and those who support them, he insists, are guilty of nothing less than infidelity, and this for merely asking five simple yes/no questions that an adolescent should be able to answer!

Following are just a few of the remaining comments offered by Francis that are clearly intended as a response to both the Dubia and the request for an audience submitted by its authors:

– “If we keep our trust in God’s surprising initiative, the strength of patience and the fidelity of Confessors: we do not have to fear the second death.” [Note: This seems to refer to those “Confessors” who now – surprise! – have the authority to declare persons inculpable for the mortal sins they are determined to continue.]

– “Let us learn to give up useless ambitions and our obsession in order to live constantly under the gaze of the Lord…” [A reference to both the “God of Surprises” and those ambitious Dubia cardinals.]

– “We are exposed to the temptation to reduce Christianity to a series of principles deprived of concreteness…” [“Concrete,” as in immutable doctrinal truths.]

– “Let us open the heart to the knocking of the eternal Pilgrim: let us have Him enter, let us dine with Him.” [The “Pilgrim” Christ who is evolving right along with us!]

At this, it should be eminently clear that Francis has answered every doubt, every question, and every request that has come his way relative to the blasphemies and heresies put forth in Amoris Laetitia.

The only step that remains is for God to raise up men among the cardinals with the mustard seed’s worth of Catholic faith to declare what has taken place:

Jorge Bergoglio has revealed himself to be a pertinacious heretic; thus no member of the Church, much less her head.

Could it be that the letter of Cardinal Caffara was made public, not in a last ditch effort to pressure Francis into responding as some have alleged, but to set the stage for making the case that he already has?

Let us hope and pray and offer sacrifices that grace will abound among all concerned; that this scourge upon the Church may soon be mitigated according to God’s holy will.

The winds of change…