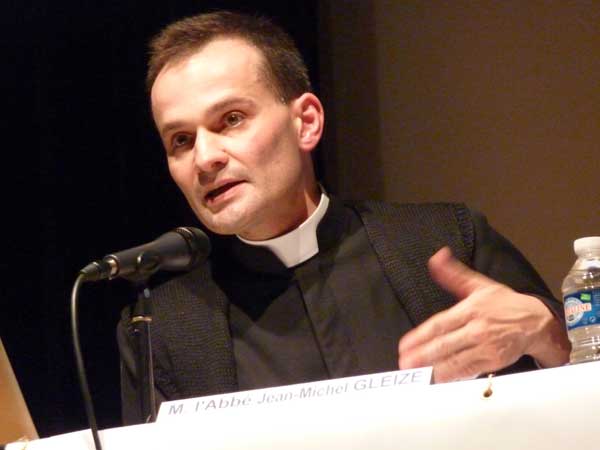 An English translation of an article written by Fr. Jean-Michel Gleize, SSPX, has been published online by the Remnant under the title:

A MAJOR SSPX CLARIFICATION: Towards a Doctrinal Agreement?

The article originally appeared in the French publication, Courrier de Rome, and was subsequently published on the official website of the SPPX in the District of France.

In the article, Fr Gleize raises a number of points that are worthy of our attention. In this post, however, we will take a closer look at what I consider to be the most pressing matter:

Having read the article in full, I am not at all convinced that the essay truly represents a “major clarification” on the part of the SSPX itself; i.e., the official position of the Society.

As we will see momentarily, there is good reason to suspect that it is more akin to an editorial that simply reflects the opinion of the writer and his publishers.

I have requested confirmation one way or the other from my contacts at the SSPX District House here in the U.S. and will inform readers as soon as I receive a response.

Cutting right to the chase, Fr. Gleize concludes that “Rome must agree, not with the Society of Saint Pius X, but with the doctrine of all time, and return from its errors” as a prerequisite for entering into any agreement ordered toward canonical recognition.

Is this opinion shared by Bishop Fellay?

I have no real reason to believe that it is; in fact, Fr. Gleize seems to acknowledge that it is not when he writes:

“Up until now, Archbishop Lefebvre’s successors made a point of envisaging things from the perspective of [the return of Rome to tradition as a prerequisite for regularization].”

NB: In other words, the current Superior does not see things in this way.

With this in mind, Fr. Gleize stated that an agreement that simply amounts to a “formulation of a common doctrinal position which would be sufficiently acceptable to both parties,” with the solitary goal of establishing canonical recognition, “will always be insufficient so long as Rome has not inserted a correction of the Council’s errors.”

Fr. Gleize went on to state:

“From this point of view, it is not enough to sign a text which only expresses part of the truth; it is necessary for Rome to profess the entirety of the whole truth and, ipso facto, condemn the errors which completely vitiate all those partial truths which can be found in the Conciliar and Post-Conciliar magisterium.”

My friends, unless I am missing something (and I very well may be), this looks an awful lot like a non serviam  declaration, or at the very least, a warning shot, directed, and rather boldly so, at Bishop Fellay himself – not just from Fr. Gleize, but from the leaders of the SSPX District of France who decided to publish the text on its official website!

Bear in mind that we are discussing an English translation of the French original, and it is possible that something has been lost in the process.

Again, I await confirmation one way or another from my sources here in the U.S. as to the nature of the article, and until that comes, we can only discern what we are reading as best we are able.

As things stand at this very moment, I would have to say that all indications are that we are witnessing something truly extraordinary.