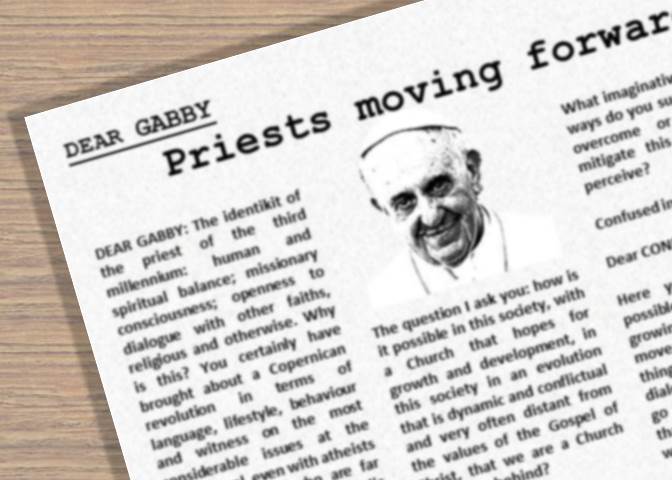 A priest looking for advice on how to advance the Church in a fast-paced world so often embroiled in conflict recently approached a well-placed cleric who had been a religious order priest and bishop for many years.

In response, the bishop answered, in part, by sharing the following true story:

A priest went as a missionary to an area where for years they had no priest, and evangelicals had arrived. He told me that he went to a woman who had been the teacher of the people and then the principle of the village school.

This lady sat him down and began to insult him forcefully saying, “You abandoned us, left us alone, and I, who in need of God’s Word, had to go to Protestant worship and I became Protestant.”

This young priest, who is meek, who is one who prays, when the woman finished her discourse, said, “Madam, just one word: forgiveness. Forgive us, forgive us. We abandoned the flock.”

The tone of the woman changed. However, she remained Protestant and the priest did not go into the argument of which was the true religion. In that moment, you could not do this. In the end, the lady began to smile and said, “Father, would you like some coffee?”

Afterwards, when the priest was about to leave, she said, “Stop here, Father. Come.”

And she led him into the bedroom, opened the closet and there was the image of Our Lady.

“You should know that I never abandoned her. I hid her because of the pastor, but she’s in the home,” the lady said.

It is a story which teaches how proximity, meekness brought about this woman’s reconciliation with the Church, because she felt abandoned by the Church.

And I asked a question of this priest that you should never ask, “And then, how did things turn out? How did things finish?”

But the priest corrected me, saying, “Oh, no, I did not ask anything; she continues to go to Protestant worship, but you can see that she is a woman who prays. She faces the Lord Jesus.” And it did not go beyond that. He did not invite her to return to the Catholic Church.

What is one to make of this “advice” and the bishop giving it? Three things can be said with certainty:

1) This bishop has a very twisted understanding of what it means to be reconciled with the Church. In his mind, a woman who hides her supposed devotion to the Blessed Virgin Mary for fear of rebuke from a heretic “pastor,” and who is steadfast in “worshiping” in a heretical community, has undergone a “reconciliation with the Church” presumably because she set her anger aside long enough to have a cup of coffee with a Catholic priest.

2) This bishop has a deficient understanding of the Church’s mission. His inquisitor has been given to believe that priestly work is well done apart from inviting heretics to return to the Catholic Church and the sacraments. He furthermore has been given to believe that he can determine on his own that one outside the Church, with no possibility of being absolved from his or her sins “faces the Lord,” the presumption being that such a person is fine where they are; outside of the solitary Ark of Salvation.

3) This bishop is the current Bishop of Rome; a pope who has demonstrated time and time again an appalling lack of concern for even the most basic duties of his exalted office.

The story above was shared by Pope Francis during a Q&A session with the priests of Caserta that took place on July 26th; it’s just one of a number of things said that day by a Roman Pontiff whose prolific public discourse so often betrays his indifference to the Catholic faith. You may read the exchange in its fullness on the Vatican News website linked above, but be forewarned, it is a gut wrenching experience.

Clearly, the priests of Caserta would have done far better to email their questions to just about any commenter on this blog. (Small compliment, I know.)

So, what are the wolves doing these days?