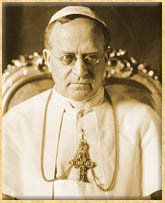 In an article published on the Fourth of July, I called attention to a document posted among the resources offered on the USCCB’s “Conscience Protection” webpage, a “one-sheet” entitled “Christ the King: That He Would Reign in our Hearts.”

The author(s) of this document quote very selectively from the Encyclical, Quas Primas, in such way as to give the uninformed reader the false impression that the teaching set forth therein serves as an endorsement for the Conference’s “religious liberty / freedom of conscience of all people of faith” campaign, when in truth, the doctrine expressed by Pope Pius XI in this great Encyclical utterly eviscerates it.

Even to the most secular minded individual such deceptiveness would be considered unethical. The USCCB “one-sheet” is so entirely misrepresentative of the Holy Father’s intent that Pope Pius XI, if alive today, could sue the Conference for libel!

As such, one is hard pressed to avoid a difficult question:

When proponents of the “Conscience Protection” campaign being waged by the USCCB, guided by the proposals put forth in Dignitatis Humanae of Vatican II, find it necessary to bolster their cause by misrepresenting – and grossly so – the papal magisterium that predates it, is there any plausible reason to believe that Our Blessed Lord is being served?

For me, this isn’t a difficult question to answer in the least.

Even so, I do realize that many of my “conservative” Catholic friends stand squarely with the USCCB and the Vatican II approach to religious freedom, and it is from them in particular that I would like to hear, to which end I have opened this post up for comments.

Is there any among you who does not find cause for deep concern in this, the Conference’s misrepresentation of Quas Primas and the doctrine underlying the Feast of Christ the King?

More importantly, is there any who would wish to defend it?