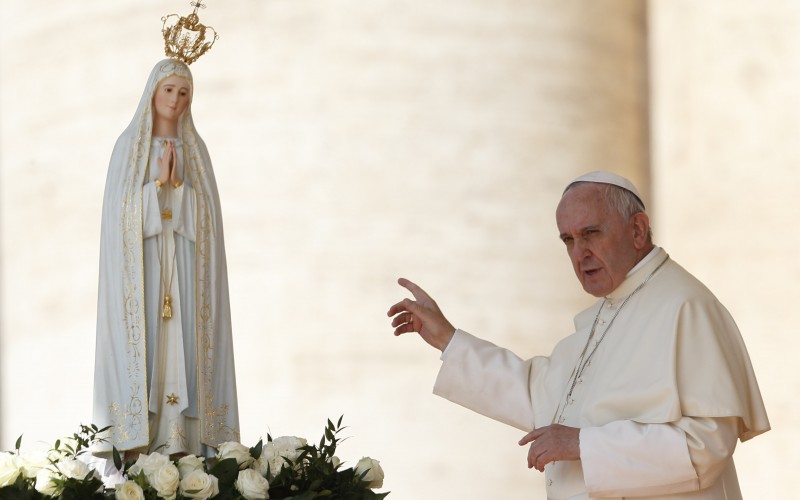 In keeping with the tradition of his predecessors, Francis is determined to make a mockery of Our Lady of Fatima; thumbing his nose at the Mother of Our Lord while insisting, “I’ll do it my way!”

During this week’s Wednesday general audience, Francis announced that he is going to Fatima to “entrust to Our Lady the temporal and eternal fate of mankind.”

He implored those in attendance, “I ask you all to join me, as pilgrims of hope and peace.”

Ah, yes, peace; the pursuit of which moved John Paul the Great Ecumenist and Benedict the Abdicator to join a collection of heathens, heretics, Jews, pagans, atheists, etc. in the Basilica at Assisi so that each could offer incantations to the deity of their choice.

It didn’t work, and neither will Francis’ Fatima follies, which will include a so-called “prayer” composed by the very hand of His Humbleness to be offered later today at the Little Chapel of the Apparitions.

Catholic News Service has published an English translation of the 700+ word text. (Hey, it takes a lot of verbiage to instruct Heaven as to how things ought to be.) Following are some highlights.

Francis will address Our Lady as “pilgrim of the peace that you announce in this place.”

Indeed, the Blessed Virgin at Fatima most certainly did provide the recipe for peace and it couldn’t be any simpler:

“I shall come to ask for the consecration of Russia to My Immaculate Heart, and the Communion of Reparation on the First Saturdays. If My requests are heeded, Russia will be converted and there will be peace…”

Francis, who has made it plain to us on multiple occasions that “proselytism is solemn nonsense” and conversion to the one true Faith is unnecessary, will likewise instruct Our Lady as he says:

“I pray for harmony among all peoples in this world … I want to be a prophet and messenger to wash the feet of all, at the same table that unites us.”

We know all-too-well that washing the feet, for Francis, is nothing more than an opportunity to show the world 1) just how humble he really is, and 2) that it matters not one iota whether or not a person rejects Jesus Christ and His Holy Catholic Church.

He is telling Our Lady, in other words:

Who really needs the Altar upon which the Holy Sacrifice, the Source of authentic Communion and harmony, is offered? I have something different in mind; the table whereupon religious diversity and human dignity is celebrated!

“Help us follow the example of Blessed Francisco and Blessed Jacinta, and all those who give themselves for the Gospel message.”

While some might be fooled by the Catholic sounding words, you can be certain that Our Lady, Sedes Sapientiae, will not be.

Rather, she will immediately recognize that standing before her is a dyed-in-the-wool humanist who has precious little regard for the true “Gospel message,” much less the mission that her Son gave to His Church; namely, to Christianize the entire world.

She will hear in his words the voice of the Evil One who wishes to deceive Catholics in particular, and mankind in general, into rejecting the life-giving dogma of the faith extra Ecclesiam nulla salus in favor of religious indifferentism and religious syncretism as Francis goes on to dictate the terms of his gospel:

“Thus, we will travel all the roads, we will be pilgrims on all paths, we will tear down all walls and overcome all boundaries, going to all peripheries, there revealing God’s justice and peace.”

If the sheer arrogance of this man is not yet clear enough, Francis (if he sticks to his own script) will even go so far as to refer to himself as “a bishop dressed in white.”

Is this perhaps a moment of truth in an otherwise deceitful production; an admission that the man who is speaking only gives the impression of being the Holy Father?

In his general audience of this week, Francis said of Our Lady, “Nor is she a woman who protests with violence.”

Perhaps not, but then again she was very clear about the fate that awaits us if her simple requests continue to be ignored:

“Russia will spread her errors throughout the world, causing wars and persecutions against the Church. The good will be martyred, the Holy Father will have much to suffer, various nations will be annihilated.”

Brace yourself with prayers, sacrifices and acts of reparation. Time is running short.

Gatekeepers of Tradition: As intolerant as the PC Police