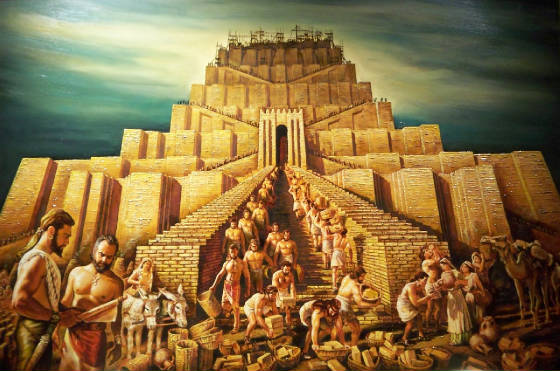 Among the glorious lessons of Pentecost that have been extolled by the Fathers of the Church from the earliest times concerns their understanding of the event as the undoing of Babel and the restoration of unity that was foretold by the prophets.

From Moses and the Decalogue to the Transfiguration, we find the image of the mountain top as that place where God meets man in a profound way throughout Sacred Scripture. The prophet Isaiah, for example, prophesies that the word of God would flow in the latter days from a house set upon the highest of all mountains; i.e., higher than any other authority on earth.

This House of God of which Isaiah spoke would be that which the men at Babel attempted to build but never could; the place where Heaven and Earth actually meet.

We know that this House on the highest of all mountains is none other than the Catholic Church; the place where God meets man in the Sacraments, in the Scriptures and in her holy doctrines.  It is in the Catholic Church alone, the New Jerusalem, that the disunity of Babel is thus undone as men of many nations and tongues recognize the voice of their Shepherd, heed His call and gather together in one profession of faith under one authority.

This undoing began, of course, on the day of Pentecost.

At Babel, men who asserted an autonomy from God attempted to use a common language for evil purposes. In response, the Lord confused their tongues and scattered them abroad. In the preaching of the Apostles on Pentecost, by contrast, people of many tongues were once more united in a common language, that through the Shepherds of His flock the Lord “may teach us his ways; that we may walk in his paths.” (Isa 2:3)

The bewilderment that most certainly filled the men at Babel was thus replaced by a different kind of bewilderment; a holy sense of awe that became a source of great joy for those who heeded the call to Baptism.

And yet, in the post-conciliar church of the “New Pentecost,” people gather on Pentecost Sunday in parishes all over the world (as in the parish shown in the video below) for what looks far more like a celebration of Babel than a sacred rite wherein believers unite, rejoicing in its undoing.

While the “Prayers of the Faithful” (themselves an invention of the experts who crafted the new rite that was thrust upon the Church by Paul VI) offered in multiple languages gives modern day liturgists the warm and fuzzies, it’s little more than an anthropocentric exercise that ironically serves more as a contradiction of the miracle of Pentecost than as a symbol of it.

Oh well, two can play at this game.

Francis flaunts his heresy, and why not?