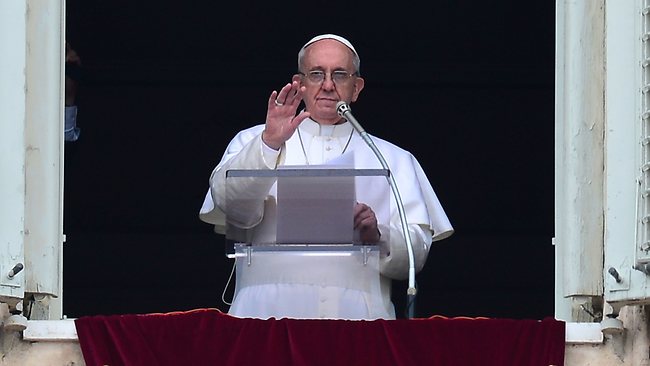 As most readers know, I’ve had a few ‘dust-ups” with the Founder of Catholic Answers, Karl Keating, over the last year or so; in particular as it relates to his unease at my willingness to shine the light of truth on the words and deeds of the pope.

Today, however, in the face of a yet another assault on the doctrine of the Church at the hands of the Bishop of Rome, we are poised to lock arms in defense of the Faith that comes to us from the Apostles.

Giving rise to our new found solidarity is the Angelus Address of 24 August 2014 wherein the Holy Father expounded upon the Gospel reading for that day’s Novus Ordo Missae, Matthew 16:13-20.

…Simon, in the name of the Twelve, professes his faith in Jesus as “the Christ, the Son of the living God”; and Jesus calls Simon “blessed” for his faith, recognizing in it a special gift of the Father. He says to [Simon], “You are Peter, and on this rock I will build my Church.”

Let us pause for a moment on this point, on the fact that Jesus bestows on Simon this new name, “Peter,” that in Jesus’ language [Aramaic] was “Kepha,” a word meaning “rock.” In the Bible, this name, this term, “rock,” referred to God. Jesus attributes this name to Simon not for his own personal qualities or his human merits, but on account of his genuine and firm faith, which comes from on high.

Jesus feels a great joy in His heart, because He recognizes in Simon the hand of the Father, the action of the Holy Spirit. He recognizes that God the Father has given Simon a “dependable” faith, upon which He, Jesus, can build His Church, that is, His community, that is, all of us. All of us.

Jesus intend to give live [sic] to “His” Church, a people founded not on offspring, but on faith, that is to say, on a relationship with Himself, a relationship of love and trust. Our relationship with Jesus builds the Church. And so to begin His Church Jesus needs to find in His disciples a solid faith, “dependable” faith. This is what He must confirm at this point in the journey, and this is why He asks the question.

The Lord has in mind the image of building, the image of the community as an edifice. And so, when He hears Simon’s frank profession of faith, He calls him “rock,” and makes clear His intention of building His Church on this faith.

Brothers and sisters, what happened in a unique way in Saint Peter, also takes place in every Christian who develops a sincere faith in Jesus the Christ, the Son of the living God.

To most readers, the problem is obvious enough.

When Our Blessed Lord said “you are Peter, and on this rock I will build my church,” the “rock” to which He referred is none other than the person of Peter. That, my friends, is the faith of the Church, and the very basis for her understanding of the papacy.

The opinion offered by Pope Francis, that the rock upon which Jesus intends to build His church is simply a “sincere and dependable faith” such as “also takes place in every Christian,” is not especially original; the Protestants have been making that failed argument for centuries as part of their denial of the Petrine Office.

In fact, the heretics have been so inclined to argue in such manner for so long that Catholic Answers saw fit to dispel with this error some ten years ago in an article bearing the imprimatur of +Robert H. Brom, Bishop of San Diego.

Who is the rock?

Now take a closer look at the key verse: “You are Peter, and on this rock I will build my Church” (Matt. 16:18). Disputes about this passage have always been related to the meaning of the term “rock.” To whom, or to what, does it refer? Since Simon’s new name of Peter itself means rock, the sentence could be rewritten as: “You are Rock and upon this rock I will build my Church.” The play on words seems obvious, but commentators wishing to avoid what follows from this—namely the establishment of the papacy—have suggested that the word rock could not refer to Peter but must refer to his profession of faith or to Christ. [Emphasis added]

Being inclined as he is to engage in the modernist pastime of clothing novelties in quasi-Catholic language, the Holy Father went on to say:

For his part, Peter is the rock, as the visible foundation of the unity of the Church; but every baptized person is called to offer to Jesus his or her own faith, poor but sincere, so that He can continue to build His Church, today, in every part of the world.

Don’t let the “visible foundation of the unity of the Church” rhetoric fool you. Pope Francis has made it rather clear that his vision of that oh-so-elusive “unity” that he labors to find along with the heretics has nothing to do with submission to the authority of the pope.

In any event, at the conclusion to his address, the pope goaded the faithful into joining him in crying out, “You are the Christ, the Son of the Living God,” three times.

At this, he turned and waved goodbye, presumably to what he thought were a bunch of “rocks” assembled in the square below.

In the aftermath a question remains: WWCAD? What will Catholic Answers do?

Ten years ago, Catholic Answers saw fit to offer a spirited defense of the papacy in the face of a nameless, faceless, generic attack carried out on the part of those who might argue that Jesus “will build His Church” upon the “rock” of “faith” as opposed to the person of Peter and his successors.

They did so with very good reason as such misrepresentations as this might threaten to cause questions on the part of those who are sincerely seeking the truth. In other words, under the steady leadership of Mr. Keating, they simply lived up to their name by offering “Catholic Answers” to potential questions.

To which I say, Bravo!

In the present case, however, we’re not just talking about a nameless, faceless, generic attack that just might cause confusion as to the doctrine of the faith; rather, we are dealing with the very same assault leveled in the form of a personal, and erroneous, opinion offered by a man dressed in papal grab, speaking from a balcony at St. Peter’s, thereby giving innocent observers every appearance of speaking on behalf of the Holy Catholic Church.

In other words, one can be entirely certain that countless millions of sincere people have been led to confusion and now have questions as to the faith of the Church, and very specifically as it relates to what Pope Francis said.

Election 2020: The outcome is certain