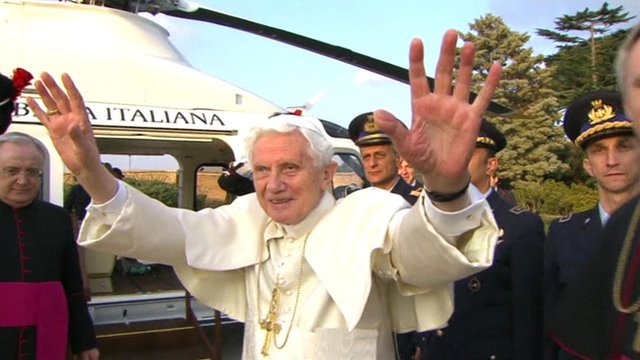 Vatican City, Aug 26, 2014 / 12:31 pm (CNA/EWTN News).- Participants in the annual Ratzinger “schulerkreis” study group were overjoyed at seeing the retired pontiff in good health, noting that they were deeply moved by his homily on the triumph of God’s love …

“What struck us all is that despite being older each year,” Benedict XVI “looks much better, fresher. He’s very clear in his mind,” he noted, observing how the former pontiff stood for nearly an hour and a half during the mass even though a chair was provided for him.

“He was in good form. There was a good spirit about him.”

Echoing Fr. Twomey’s sentiments is Secretary of the Pontifical Council for Culture Mons. Barthélemy Adoukonou, who also participated in the study circle.

“It was extraordinary. As always, it amazed us that in spite of age, and without a prepared text, the Pope (emeritus) gave a homily at a great level, with an extraordinary clarity of mind for his age.”

Recall, however, Pope Benedict’s statement of intent to abdicate made on 10 Feb 2013:

I am well aware that this ministry, due to its essential spiritual nature, must be carried out not only with words and deeds, but no less with prayer and suffering. However, in today’s world, subject to so many rapid changes and shaken by questions of deep relevance for the life of faith, in order to govern the bark of Saint Peter and proclaim the Gospel, both strength of mind and body are necessary, strength which in the last few months, has deteriorated in me to the extent that I have had to recognize my incapacity to adequately fulfill the ministry entrusted to me.

Does anyone other than the willfully deluded and painfully ignorant still honestly believe that Benedict XVI wasn’t forced from office by a substantial threat either real or imagined?

He told the world that he was stepping aside in order to make room for a man better suited to answer important “questions of deep relevance for the life of faith,”  and who would more vigorously “govern the bark of Saint Peter and proclaim the Gospel.”

The conclave elevated in surprisingly short order a man who:

All indications are that those who orchestrated what looks more and more like a hostile takeover of the papacy couldn’t even muster the patience to put on a good show at the conclave in order to hide the appearance of having preselected Jorge Bergoglio well before the doors were even locked.

No… Pope Benedict didn’t depart for reasons of physical and mental health, and there’s not a Catholic this side of brain dead who is still buying that lie.

What’s it all about?

BREAKING: No ‘formal correction’ of Francis to come?