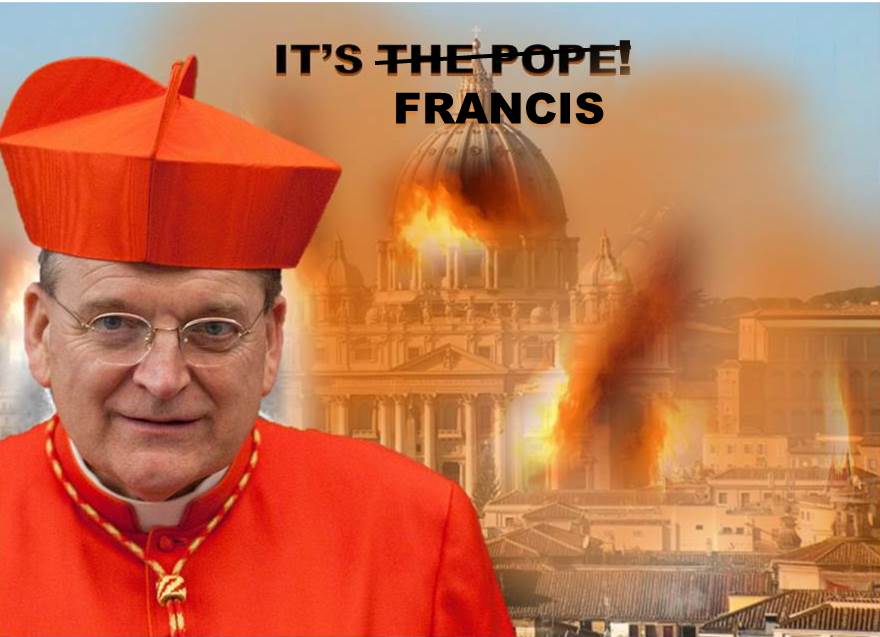 A few days ago, Cardinal Burke was interviewed for the umpteenth time since making public the now infamous Dubia and subsequently promising to issue a “formal act of correction” should Francis fail to provide an answer.

In other words, the roller coaster ride continues… 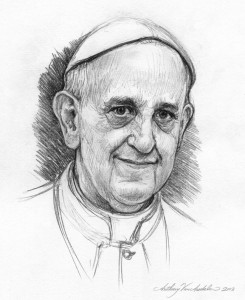 Last October, Cardinal Burke, while speaking at a conference (for the umpteenth time since making public the now infamous Dubia…), painstakingly described for his audience what an apostate looks like.

If there were such a thing as an ecclesial criminal sketch artist, Burke’s account could have been used to create the rendering on the right.

Seriously, His Eminence made it perfectly plain (without actually saying so; i.e., in the manner of spineless men) that he believes… no, make that he knows that Jorge Bergoglio is an apostate.

Even so, in his most recent interview just three short months and God only knows how many more lost souls later, Burke made it perfectly plain (again, without actually saying so) that, at least as things stand today, he has no intention of making good on that “formal act of correction” after all.

It’s a long interview; one wherein the interviewer, a guy named Chris Altieri, reveals himself to be just as spineless as his guest, and the cardinal uses hundreds of words that often come nowhere near answering his flaccid questions.

If you still want to read the entire thing for yourself, feel free. Here, we’ll take a look at some of the relatively noteworthy quotes.

Cardinal Burke admits that the Dubia (doubts) is as relevant as ever, saying:

It remains as critical as ever to respond to the serious doubts, which have been raised in people’s minds by Amoris laetitia, to make clear the constant teaching and practice of the Church…

Get that? Burke said that Amoris Laetitia has raised serious doubts in people’s minds.

Yes, I know, this much is entirely obvious, but what immediately follows demonstrates Burke’s utter fecklessness so vividly that it’s almost difficult to believe.

Altieri followed up by posing a question (in the form of a mini-speech) suggesting the opposite of what Burke had just stated; opining that Amoris Laetitia isn’t really the reason why so many people have serious doubts about such things as sacramental marriage, Confession and Holy Communion.

After so pontificating, Altieri eventually asks, “So, where is the confusion coming from?”

If Cardinal Burke was in possession of even a shred of conviction (to say nothing of manliness) he would have firmly corrected his presumptuous little interlocutor; reminding him of the answer that he provided literally just a minute earlier – Amoris Laetitia has raised the doubts under discussion.

There has always been a certain element in the Church, which has rebelled against the Church’s teaching … with regard to irregular matrimonial unions, cohabitation outside of marriage; it is all an effect, really, of secular society, in which there has been in our time a relentless attack upon the sanctity of marriage.

So… now he is intimating that neither Amoris Laetitia nor the author of that disastrous text – a man that Burke was at pains to paint as an apostate just three months ago – are to be blamed for the present crisis; rather, it’s the fault of a “certain element in the Church” and “secular society.”

This is exactly how “men without chests” operate, to quote C.S. Lewis (or as I would prefer to say, men without… oh, never mind.)

You see, Burke fully realizes that a grave danger is threatening to destroy his family, and, furthermore, he has no doubt about who is driving that threat.

And yet, knowing himself better than we do as one who lacks the backbone necessary to address the matter, he unburdens himself of the duty to protect his own by shifting the blame to anonymous, largely un-confrontable, bogymen; in this case, “certain elements in the Church” and “secular society.”

According to Cardinal Burke, we now have but one choice:

The only thing we can do in terms of Amoris laetitia is to read it in the perspective of the constant teaching and practice of the Church, and that means that there cannot be what some have called a revolution in the Catholic Church.

He went on to define what he means by “revolution” as follows:

The Church now accepting that people who are divorced and whose marriages have not been declared null are able to enter into a so-called “second marriage”; revolution, too, in terms of the Church’s constant teaching that the conjugal act rightly takes place only within marriage, in other words, cohabitation outside of marriage is always and everywhere evil.

“The Church” now accepting… This is another anonymous bogyman put in place by His Fecklessness in order to avoid the harsh reality that it is Francis who is driving the revolution.

Well, on the one hand it is an interpretative problem. On the other hand, it certainly is a problem of application.

You get the gist of this laughable exchange.

One of the biggest failings of prelates like Cardinal Burke and Bishop Schneider (apart from lacking a passion for fiercely protecting their own as all good fathers must) is that they are approaching the problem of Amoris Laetitia (and thus its author) exactly backwards.

They tend to focus largely on the so-called pastoral guidelines it inspired; claiming that they will lead to doctrinal errors, when in point of fact, the blasphemies and heresies contained in the text of Amoris Laetitia itself is what came first, thus giving rise to the abandonment of the bi-millennial practice of the Church.

The reason why men like Cardinal Burke cannot muster up the gumption to condemn error is simple; they are men-of-the-council – the same that summarily rejected the duty to condemn in favor of dialogue. We’ll come back this momentarily.

Over the course of the roughly half-hour interview, Altieri didn’t bother to ask Cardinal Burke about the “formal act of correction.” He did, however, give him ample opportunity to comment on it.

There are people who have been heard and who have found their way to significant public airing of their opinions on this question, who have attempted, anyway, to make the Holy Father himself either a willing or an unwilling participant in this. I would like you to have the chance to speak to that.

Yes, “people” have attempted to make Francis (I assume that is who he intends to refer as “Holy Father,’ though I object to the implication on all counts) a willing participant in the aforementioned revolution.

I might add that Francis is one of those people, and furthermore, his attempts have been crystal clear and rather successful!

Even so, neither Altieri nor Burke thought to mention the guidelines established by the bishops of Buenos Aires, much less the letter of Francis stating “there are no other interpretations” of Amoris Laetitia and their inclusion, at his direction, in the AAS.

Peas in a pusillanimous pod, these two.

Burke left the faithful with the following advice:

Therefore, I would simply urge fellow Catholics – even as I am trying to do myself – to respond to the situation by fidelity to what the Church has always taught and practiced – and that is not a mystery to us: it is contained in the Catechism of the Catholic Church, for instance – and remaining faithful in that way we will also remain one with Peter; because one Pope does not teach differently from another Pope.

This man is living in Fantasyland, or more precisely, Conciliarland; a place where the “hermeneutic of continuity” is considered a remedy to objective heresy, and the only thing that is condemned is condemnation itself; unless, of course, one dares to promote and defend authentic Catholic tradition.

In his first interview with his mini-me, Altieri, back in April 2017, Cardinal Burke said:

A lot of those people of profound thought [like Josef Ratzinger], who were very enthused about the II Vatican Ecumenical Council, and enthused about its documents, when they saw what happened after the council, that is, this “spirit” of the II Vatican Council superseded the teaching of the Council itself, so that the Council became susceptible to all kinds of abuse, both doctrinal and liturgical, and disciplinary …

That’s the kind of spirit that intervened, and we are still dealing with it. The pontificate of Pope John Paul II brought us a long way.

This tells us everything we need to know about Raymond Cardinal Burke:

He is a dedicated supporter of Vatican Council II and its very own make-believe “Saint,” John Paul the Great Ecumenist.

As such, barring conversion, he will never manage to confront the Bergoglian menace in any meaningful way, and it is for this very same reason that he will never contribute to spreading the authentic message of Fatima.