Home
Blog Post
Novus Ordo: The mask is on… I mean, off 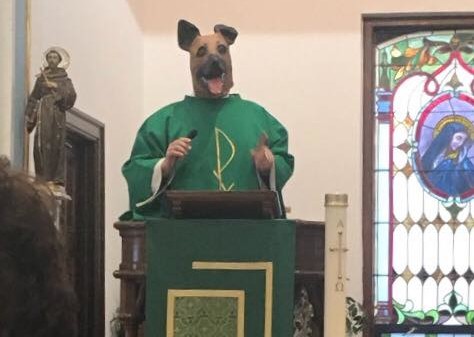 The photo above has been making the rounds on social media lately, leaving outrage and indignation in its wake.

What’s going on you may ask?

It’s a Novus Ordo deacon delivering a homily at Mass while showing his team spirit in support of the Philadelphia Eagles who, later that Lord’s Day, were set to square off against the Minnesota Vikings in the National Football Conference Championship game.

Who does this guy think he is making a mockery of the Mass; treating it as if it is little more than a “gathering of the people” in a rite “bound to time and place?” (1) It’s as if he “has no intention of presenting the Faith as taught by the Council of Trent, to which, nonetheless, the Catholic conscience is bound forever.” (2)

ANSWER: He’s an ordained representative of the conciliar church-of-man, whose behavior, though deeply disturbing to those who have been deceived into believing that the Novus Ordo Missae came from the hand of Holy Mother Church herself, faithfully communicated precisely what the architects of the bastard rite intended.

1. This is how the original GIRM for the Novs Ordo Missae described the new Mass.

2. The conclusion drawn by Cardinal Ottaviani, Cardinal Bacci, Archbishop Lefebvre, and a group of twelve theologians in their Brief Critical Study of the New Order of Mass (aka the Ottaviani Intervention) as communicated to Pope Paul VI prior to its promulgation. 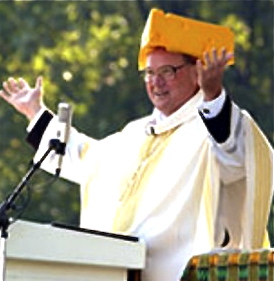 As such, you won’t hear me complaining about how Deacon Doghead mocked the Mass. He did no such thing.

By putting that stupid mask on himself, he took the mask off the Novus Ordo, which is itself a mockery of the one and only authentic Roman Rite; i.e., he revealed the character of the new Mass for all to see.

And let us not forget that he isn’t exactly blazing a new trail here; rather, he’s just following in the footsteps of certain self-aggrandizing conciliar giants who came before him.

But innocent people who don’t know any better were genuinely scandalized!

Yes, they were, and it’s about time.

Even though the devout neo-conservatives who presently consider this dog-n-pony show sans chavel a grave offense against that which is Holy and set apart for divine worship, what they actually witnessed is solid evidence in support of the following observation about the Novus Ordo taken from the Ottaviani Intervention:

The outward setting of the Sacrifice, evidence of its sacred character, has been profaned.

It occurs to me that the disgust that many conservatives are expressing in light of this admittedly extreme example of liturgical showmanship is very much like the disgust that so-called “traditionalists” (aka Catholics) feel for even the most reverently celebrated Novus Ordo.

In both cases, the fact of their being repulsed comes from an awareness that the profane, the earthbound, and the anthropocentric has come to replace the sacred, the eternal, and the Christocentric.

For the conservative, this awareness is presently limited to isolated cases like the one presently under discussion, but it need not remain so.

It is my hope that incidents like these will move at least some of them to look at the Novus Ordo itself a bit more critically; not from a self-centered perspective focused on what they find personally uplifting, but rather relative to the Church’s venerable liturgical tradition and her immutable doctrines as so clearly expressed in the Traditional Roman Rite.

A good place to begin that reflection may be to ask:

Why is it that we never hear of such antics taking place within the Traditional Latin Mass; either past or present?

I’ve spoken with many a Novus Ordo lovin’ conservative Catholic who lived during the days before the Council, and other than whining about how we didn’t understand, the only complaints I’ve ever heard about “Mass in the old days” are things like, Fr. Breakneck used to brag that he could knock out a low Mass in under 30 minutes, Fr. Mumbler could barely pronounce the Latin, the sermons weren’t relevant, etc…

It is undeniable that there is something very different about the new Mass; something that makes it uniquely conducive not only to dog masks and cheese heads, but also to dancing clerics, gay activism (if you’ll forgive the repetition), pagan pageantry, immodest dress, and worst of all, Eucharistic sacrilege.

Truly, we could go on citing actual instances of Novus Ordo shenanigans until the cows come home, but I trust the point has been made.

In short, what the sincere will discover, if only they are willing to seek, is that the sacred character of the Traditional Latin Mass permeates every single part of the entire rite; whereas the character of the Novus Ordo, in spite of the presence of certain traditional expressions, is poisoned with the leaven of profanity and anthropocentricism.

May it please God to open their eyes to this reality, and if it takes more deacons in dog masks to get the ball rolling, so be it.