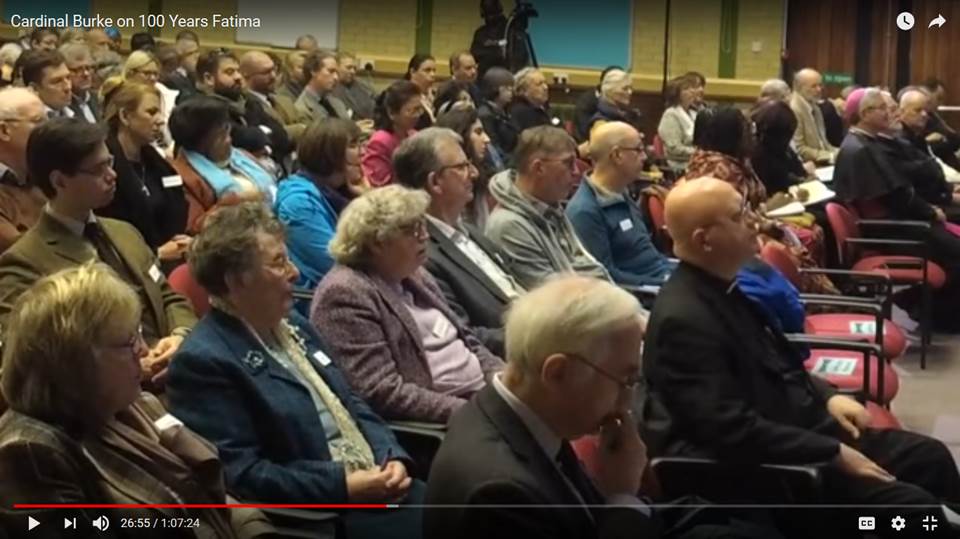 On October 12, Cardinal Burke delivered an address at yet another conference in observance of the 100th anniversary of the Fatima apparitions, this one at Buckfast Abbey in Devon, England.

Like his other presentations on the topic, Cardinal Burke once again spoke of “the urgent need of a new evangelization;” quoting “Saint” John Paul II at length while holding him up as a model of fidelity to Our Lady’s message.

He also once again acknowledged that the Third Secret of Fatima concerns the sacred hierarchy’s “failure to teach the faith, in fidelity to the Church’s constant doctrine and practice,” which amounts to a tacit admission that the Vatican has yet to publish it in full.

And, just as he had done elsewhere, he stated that the consecration of Russia “was not carried out in the manner requested by Our Lady.”

He also repeated the insipid words of John Paul II, “Mary’s appeal [for the consecration] is not for just once.”

Cardinal Burke also saw fit to once again vouch for the fake letter attributed to Sr. Lucia wherein she allegedly said that the consecration of Russia “has been done just as Our Lady asked,” just as he did in his interview with the Wanderer back in August.

This address, however, was very different than the others, and in a most noteworthy way.

Those with ears to hear cannot help but conclude that Cardinal Burke used the occasion of the Buckfast Abbey conference on Fatima as an opportunity to provide a seminar of his own on the present crisis concerning Francis.

Yes, the two are related, but all indications are – at least in my view – that Cardinal Burke’s comments were offered directly in preparation for the long-awaited “formal act of correction,” and what’s more, as a primer of sorts to aid other churchmen in view of what may logically follow should His Humbleness refuse to respond appropriately.

Those who take the time to read the text of the entire presentation (roughly 7,000 words in length) will be struck by the academic tone of much of its content.

A video of the address is also available, a screenshot from which appears above.

Note that the conference was intended for, and was well-attended by, ordinary lay folk.

Even so, much of Cardinal Burke’s commentary consisted of material far more suitable for his fellow prelates, theologians, and canon lawyers.

For example, he offered lengthy citations from the Summa Theologica of St. Thomas Aquinas, the Magisterium of Pope Pius X, the Code of Canon Law (both the 1917 and 1983 editions), as well as highly nuanced definitions taken from The Moral Theology Handbook (by Fr.  Dominic Prümmer, O.P.), and the Dictionnaire de Théologie Catholique.

Following are some of the more noteworthy portions of Cardinal Burke’s presentation wherein he appears to be assessing the condition of one Jorge Mario Bergoglio:

The Church’s technical term for the abandonment of the faith is apostasy … Apostasy is the total defection from the Catholic faith, whereas heresy is the denial of one or another article of the faith.

Historically, some noted theologians, like Francisco Suárez, have taught that heresy willingly embraced by someone who had before professed the Catholic faith is also a form of apostasy…

As Father Prümmer indicates, for the apostasy to take place it is not necessary that the member of the faithful give adherence to another determinate faith, for example, Judaism or Islam, but simply, “after baptism received in the Catholic Church, defects completely from the faith.” He gives as examples those who abandon their Catholic faith as rationalists, atheists, free thinkers or strict Freemasons.

Following a lengthy quote from E Supremi of Pope St. Pius X noting the apostasy of his own day, Cardinal Burke states:

How much more even today does the Roman Pontiff face the daunting challenge of a widespread apostasy from the faith.

Don’t be fooled. Cardinal Burke isn’t suggesting that Francis in any way strikes a figure similar to that of St. Pius X; on the contrary.

He is cleverly making it plain for the mentally weak that the abandonment of faith known as apostasy concerns the Roman Pontiff of today (if you will allow). This, in other words, is the “daunting challenge” at hand!

Cardinal Burke labored to help his listeners make the connection between Francis and apostasy for themselves as he said:

Apostasy can also manifest itself in an implicit and interpretative manner “when a Christian without formally signifying that he renounces his faith, pretending even to treasure the title of Christian, conducts himself in such a way that one can surely conclude that he has become a stranger to the faith.” Examples are those who applaud the attacks of impiety against religion, who mock the leaders and pastors in the Church, who deride the institutions and sacred rites, the religious life, or who propose or support legislation contrary to divine law or against Church law.

“There is in these exterior manifestations, when they are conscious and above all repeated, the proof that the faith has disappeared from the hearts of those who make themselves culpable for them. It is implicit apostasy.” A particular example of implicit apostasy are the “credentes apostatis,” mentioned in Church discipline:

Credentes apostatis are those who, without themselves having formally apostasized, listen willingly to apostates and, by their words or actions, approve, at least in general, their manner of thinking and of speaking. There are also “fautores apostatis” who favor a cooperation, positive or negative, with apostasy. They are guilty of negative cooperation who “being held by office to denounce, pursue or punish apostates, fail in their obligation.”

Look, I am as frustrated as anyone with all of these suggestive allusions that require reading between the lines; as opposed to just stating the obvious in plain and simple language.

Even so, one is hard pressed to deny that Cardinal Burke is deliberately setting forth a description (more properly, an indictment) of Francis – and again, not so much for the rank and file as for others in authority.

As if to make certain that none could be so aloof as to miss the point, he went on to say:

How much more even today movements for a single government of the world and certain movements with the Church herself disregard the moral law because they lack any foundation in God and in His plan for our eternal salvation.

Pssssst. Sound familiar? Did you get that?

The teaching of the Faith in its integrity and with courage is the heart of the office of the Church’s pastors: the Roman Pontiff…

Church discipline, down the Christian centuries, has always addressed the grave evil of apostasy and applied appropriate sanctions both to call the apostate back to the faith and to expiate the grievous harm done by apostasy.

Here, Cardinal Burke is at once defending, yet again, the Dubia, while also suggesting the way in which the “formal act of correction” should be understood; namely, as both a call to embrace the faith (for Francis), and as a means of expiating the harm that he has done to the faithful.

Cardinal Burke made it exceedingly clear to all but the hopelessly dense that the matter at hand concerns Amoris Laetitia:

We think about the ever more diffuse confusion and error in the Church about the foundations of the faith – about the Holy Eucharist and Holy Matrimony, about the truth of the Holy Scriptures – and of the moral life, about acts which are always and everywhere evil and about the just punishment of sin, including eternal damnation for the soul which remains unrepentant of grievous sin.

And all of this, in many places, not only goes uncorrected by the clear announcement of the Church’s constant teaching and practice, but is condoned and even promoted by those charged by Our Lord with the care of souls.

Finally, as if to counter those who will continue to question his motives, he says:

We are not talking about theoretical questions but about a confusion and error which endangers the salvation of souls.

I’m the last person who, like so many neo-cons in the mushy middle, is waiting in joyful hope for the coming of our savior, Raymond Burke (to borrow an out-of-place phrase from the Novus Ordo, prayed by those who believe that Our Lord is truly present on the Altar.)

When it comes to Cardinal Burke, I think there is ample evidence to conclude that he is a disoriented man-of-the-Council.

That said, at the same time, it is clear that he recognizes that the salvation of souls is at stake thanks to the antics of Francis; in particular, as it concerns Amoris Laetitia, and what’s more, he feels duty bound in conscience to address it.

How he will do so and to what end, we will have to wait and see, but his presentation given at Buckfast Abbey, if properly understood, seems to have set the stage.

The question no one is asking