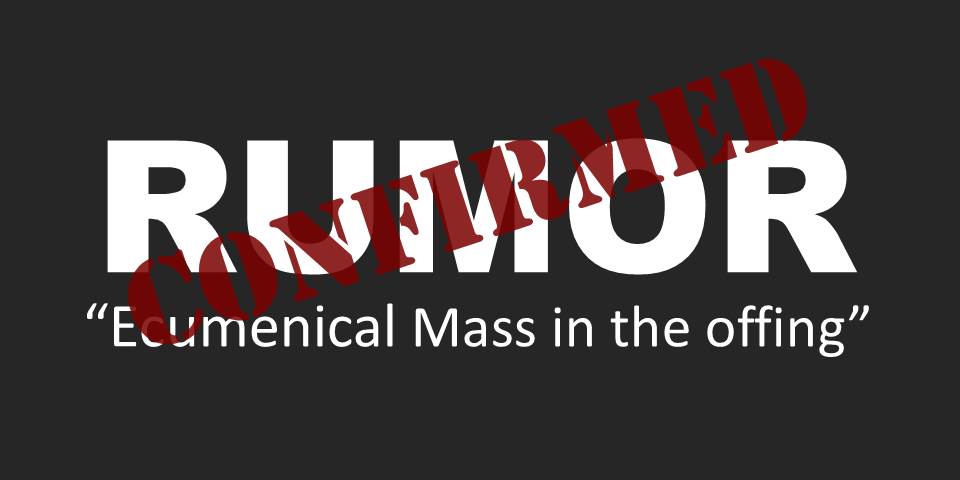 It has long been rumored that a secret Vatican commission has been assigned the task of creating a so-called “Ecumenical Mass;” a rite recently described by Italian journalist Marco Tossati as “a liturgy designed to unite Catholics and Protestants around the Holy Table.”

Well, akaCatholic is now able to report that a high-ranking curial official (a cardinal who I hope to be able to identify by name soon) has unequivocally confirmed, in writing, not only that the committee was actually created, but that its work has been completed, and what’s more, the “Mass” it produced is as bad, or worse, than imagined.

As will become clear, there can be no doubt that Francis is very pleased with the results.

Following are some excerpts taken from the Cardinal’s somewhat lengthy missive (written in Italian and translated into English) wherein His Eminence severely criticized the newly created Mass.

After carefully reviewing the text produced by the committee, His Eminence stated that the new rite has “every possibility of satisfying the most modernistic of Protestants.”

He went on to reveal that it is being presented in the “Instruction” that accompanies it, as:

“A sacred meeting or assembly of the People of God … to celebrate the memorial of the Lord. Thus the promise of Christ, ‘where two or three are gathered together in my name, there am I in the midst of them,” is eminently true of the local community.’” [NOTE: Here, His Eminence is providing a direct quote taken from the “Instruction” for the Mass]

His Eminence went on to observe:

This promise [“Where two or three are gathered…”], which refers only to the spiritual presence of Christ with His grace, is thus put on the same qualitative plane, save for the greater intensity, as the substantial and physical reality of the Sacramental Eucharistic Presence. [Emphasis in original]

Just as one may have expected, a considerable effort was made to downplay those things in the Mass that Protestants find objectionable.

For instance, the Cardinal writes:

As is only too evident, the emphasis is obsessively placed upon the supper and the memorial instead of upon the unbloody renewal of the Sacrifice of Calvary.

Getting to the heart of the matter, His Eminence observed that the rite not only obscures, but even amounts to a denial of certain dogmatic truths. He writes:

It does not, in a word, imply any of the essential dogmatic values of the Mass which together provide its true definition. Here the deliberate omission of these dogmatic values amounts to their having been superseded and therefore, at least in practice, to their denial. [Emphasis in original]

The Cardinal even went so far as to say that “faith in the dogma of the Real Presence is implicitly repudiated.”

In other words, it’s not Catholic!

Again, we cannot be surprised to find that this is the case. The only question was how the committee would go about denying the “intrinsic value of the Eucharistic Sacrifice.” Now we know.

His Eminence tells us that the new rite:

“…changes the nature of the offering, turning it into a sort or exchange of gifts between man and God: man brings the bread, and God turns it into the ‘bread of life’; man brings the wine, and God turns it into a ‘spiritual drink.’ … By suppressing the continual reference to God in the Eucharistic prayers, there is no longer any clear distinction between divine and human sacrifice.” [Emphasis in original]

As we have long noted in this space, Francis is focused almost exclusively on earth bound activities; most notably, so-called “social justice” and service to the poor.

The Cardinal observed that the rite makes these man-centered priorities evident:

There is a danger that the uniqueness of this offering will become blurred, so that participation in the immolation of the Victim comes to resemble a philanthropical meeting, or a charity banquet.

His Eminence further observed that the rite is designed in such a way as to strip the priest of his unique identity (surprise, surprise). He writes:

The priest’s position is minimized, changed and falsified. Firstly in relation to the people for whom he is, for the most part, a mere president, or brother, instead of the consecrated minister celebrating in persona Christi … Not a word do we now find as to the priest’s power to sacrifice, or about his act of consecration, the bringing about through him of the Eucharistic Presence. He now appears as nothing more than a Protestant minister.

The Cardinal suggested that his criticism, severe as it is, only scratches the surface:

A complete evaluation of all the pitfalls, the dangers, the spiritually and psychologically destructive elements contained in the document—whether in text, rubrics or instructions—would be a vast undertaking.

Even so, the courageous Cardinal did not hesitate to conclude:

By way of compensation, the new Liturgy will be the delight of the various groups who, hovering on the verge of apostasy, are wreaking havoc in the Church of God, poisoning her organism and undermining her unity of doctrine, worship, morals and discipline in a spiritual crisis without precedent.

If all that has been said thus far isn’t disturbing enough, the truly terrible news is that the “Mass” described by the Cardinal as having “every possibility of satisfying the most modernistic of Protestants” isn’t just coming to a parish near you; rather, it has been celebrated daily all over the Catholic world for nearly half-a-century!

As some readers have already discerned, the high-ranking curial official quoted in this article is none other than Alfredo Cardinal Ottaviani and the BRIEF CRITICAL STUDY OF THE NOVUS ORDO MISSAE (otherwise known as the “Ottaviani Intervention”) that he produced along with Antonio Cardinal Bacci, Archbishop Marcel Lefebvre, and a group of Roman Theologians.

NB: This article is much more than just a parody.

So-called “conservative” Catholics are rightly horrified at the idea that a “liturgy designed to unite Catholics and Protestants around the Holy Table” is in the offing. Many, I suspect, cannot even bring themselves to acknowledge that such a thing could ever possibly be dispensed by the hand of a pope.

And yet, if Cardinal Ottaviani and his collaborators have even come close to providing an accurate snapshot of the Novus Ordo Missae, it is clear that an “Ecumenical Mass” – one created with the deliberate intent of making Protestants comfortable – already exists in the so-called “Ordinary Form of the Roman Rite.”

Who can possibly deny that in Catholic parishes all over the world, militant homosexuals, abortion rights advocates, and notorious public heretics of various stripes have been waltzing up for Holy Communion, Sunday in and Sunday out, for decades on end?

In other words, persons who are quite obviously Protestant (in spite of pretending to remain Catholic) have long been openly invited to gather ‘round “the Holy Table.”

What’s more, it has long been reported, and in L’Osservatore Romano no less, that both John Paul II and Cardinal Ratzinger gave Communion even to those who openly identify as Protestant.

More recently, in November 2015, Francis publicly counseled a Lutheran woman in such a way as to grant her (and every other heretic paying attention) a license to receive Holy Communion at Mass.

So, what are we to make of these rumors about another “Ecumenical Mass” being in the offing; the motives for this one being more explicitly stated?

Once again, I’m having trouble finding cause for concern.

On the contrary, I say bring it on!

If nothing else, the introduction of such an abomination may serve to open the eyes of those who presently fail to understand that simply because the Novus Ordo was promulgated by Paul VI, this does not  mean that it was dispensed to the faithful by Holy Mother Church. As such, it may not necessarily be good, and may even be harmful.

With this in mind, even if the rumored “Ecumenical Mass” never comes to fruition, I am grateful for the rumor itself since it may have created enough concern among certain of the rank and file that they are willing to at least consider, for the first time in their lives, the dangers associated with the Novus Ordo as identified by Cardinal Ottaviani and his collaborators.

As such, please consider passing this article along to any “concerned conservatives” in your circle of influence.

A regular Jorge? Don’t you believe it.