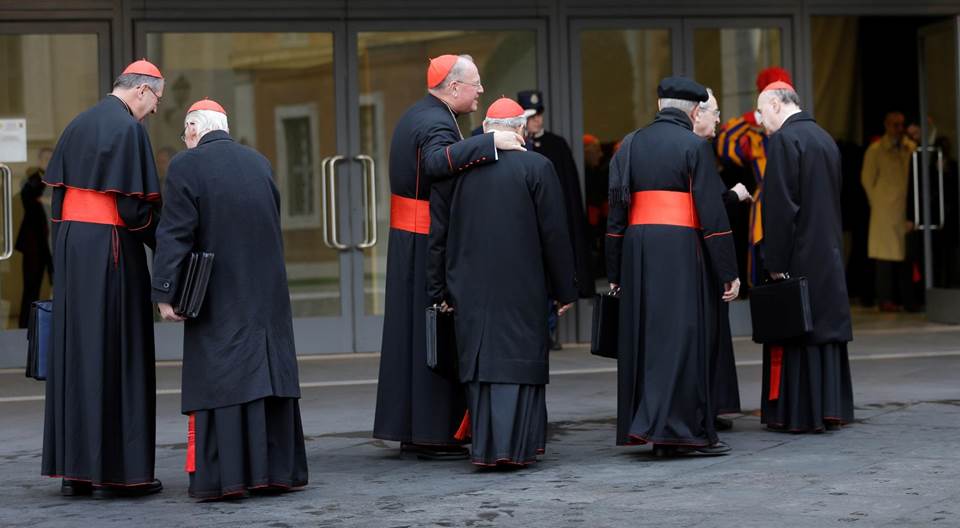 The Catholic blogosphere has been buzzing thanks to a post at EWTN Great Britain by Deacon Nick Donnelly, the headline to which says it all:

Pro Pope Francis cardinals want him to resign to avoid schism, reports the Times of London

(NOTE: The post has since been removed from the EWTN website. An archived version is available HERE.)

Both Donnelly and the Times are drawing from a report that was recently published by Italian journalist Antonio Socci:

A large part of the cardinals who voted for him [Bergoglio] is very worried and the curia . . . that organised his election and has accompanied him thus far, without ever disassociating itself from him, is cultivating the idea of a moral suasion to convince him to retire.

It was the latter faction who now believed that the Pope should resign and who would like to replace him with Cardinal Pietro Parolin, the Vatican secretary of state, Mr Socci said. He believed that the group numbered around a dozen, but the importance of the members counts more than their number … The cardinals are worried that the church could be shattered as an institution. There are many indirect ways in which the pressure might be exerted.

Most of the commentary that I’ve read on this story seems to be focused on the idea that, if true, this could signal the beginning of the end for Bergoglio; as if he may have pushed the envelope a bit too far a bit too quickly, causing consternation even among his cardinal-electors and supporters in the Curia out of concern for the Church.

The churchmen who pressed for Bergoglio’s election and have supported him thus far have no love for the Mystical Body of Christ. In their eyes, the Church is a human organization with purely temporal aims, and their commitment is to the revolution; not the man chosen to run the day-to-day operations.

The only reason these cardinals may have an interest in seeing to it that the Church is not “shattered as an institution” is because they wish to leverage her influence, her global reach, and her infrastructure as a means of bringing to fruition their vision of a one-world religion.

Now that the Church has been sufficiently infiltrated by Masons and humanists, so much so that even the popes are furthering the cause of religious indifferentism, keeping “the institution” intact is a strategic priority.

If Bergoglio has been deemed less-than-desirable by those cardinals who lobbied on his behalf in the lead up to Conclave 2013, it is for one reason alone; they are convinced that their evil designs will be better served by another.

These cardinals believe that the Pope should resign and they would like to replace him with Cardinal Pietro Parolin.

This has a familiar ring to it, does it not?

– A pope that is considered an obstacle relative to the nefarious aims of the revolutionaries will be pressured to resign by a powerful cabal of high ranking churchmen.

– At one and the same time every effort will be made to ensure that the man of their choice is elected at the conclave to follow.

It’s not unreasonable to believe that this is precisely what transpired in 2013.

This being so, who can be surprised if the same strategy is employed by the enemies of the Church some four years later?

Indeed, it’s not difficult to imagine that this same shameful scenario will repeat itself over and over again; at least until such time as Divine intervention has its say.

Too many kings in the kingdom