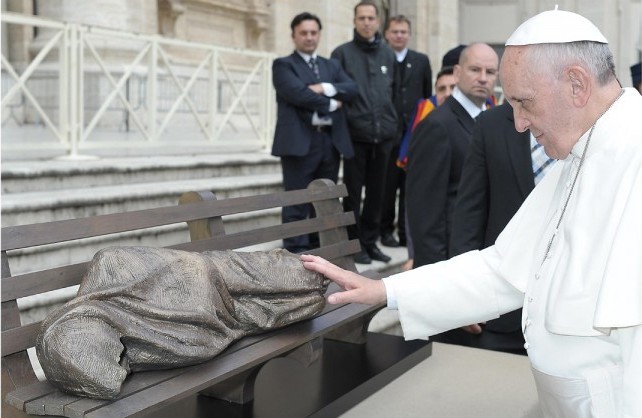 In a post written nearly two years ago, I described the Bergoglian Christ, the one after which Francis intends to remodel the Church, as follows:

A Jesus who is downtrodden and weak; a Jesus victimized by society’s ills, not unlike so many others.

Most importantly, a Jesus who renders no judgments and makes no demands beyond providing an image that provokes an earthbound sense of guilt within the “haves,” while simultaneously fanning the flames of class warfare within the “have nots.”

This false Bergoglian god stands in stark contrast to Christ the King:

Jesus who defeated death and is Risen unto Majesty; who reigns victorious over all of society and possesses Kingly authority over every individual, family, and State, be they Catholic or otherwise.

Most importantly, and least acceptable to the men of this world, is the glorious reality that Christ the King speaks even today through the Holy Catholic Church; the same established by Him, endowed with the fullness of Divine Revelation, and granted the right to pass judgment on the personal and social obligations of humankind.

Since I wrote these words, Francis has done nothing but confirm that the “Jesus” that he preaches is born of a Christological heresy wherein God incarnate is viewed as little more than a mere man.

In a recent Santa Marta homily, Francis made this clear yet again as he expounded upon the source of Jesus’ authority.

Jesus served the people, He explained things because the people understood well: He was at the service of the people. He had an attitude of a servant, and this gave authority.

Francis contrasted this make-believe Jesus with the “doctors of the law” of whom he said:

These had a psychology of princes: ‘We are the masters, the princes, and we teach you. Not service: we command, you obey.’ And Jesus never passed Himself off like a prince: He was always the servant of all, and this is what gave Him authority.

Standing before Pilate Our Lord left no doubt:

My kingdom is not of this world. If my kingdom were of this world, my servants would certainly strive that I should not be delivered to the Jews: but now my kingdom is not from hence. Pilate therefore said to him: Art thou a king then? Jesus answered: Thou sayest that I am a king. For this was I born, and for this came I into the world; that I should give testimony to the truth. Every one that is of the truth heareth my voice. (John 18:36-37)

My Kingdom is not of this world…

Clearly, Jesus is declaring that He is indeed a King!

Note very well, however, that Jesus is not saying that His Kingdom is such that He does not reign over this world; an erroneous interpretation often put forward by churchmen in our day.

In truth, Jesus is informing Pilate, and us, that the source of His authority is not “of this world;” rather, it is divine. (We’ll come back to this important point momentarily.)

Following His glorious resurrection – the full truth about which Francis most certainly denies – Our Lord confirmed His Kingship and the source of His authority all the more clearly:

After His resurrection, when giving to His Apostles the mission of teaching and baptizing all nations, he took the opportunity to call himself King, confirming the title publicly, and solemnly proclaimed that all power was given Him in heaven and on earth. These words can only be taken to indicate the greatness of His power, the infinite extent of His kingdom. (cf Pope Pius XI, Quas Primas 11)

This brings me back to the heretical Bergoglian proposition that Jesus had an attitude of a servant, and this gave authority…

Many readers may feel compelled to respond to this error by insisting, “His authority rests in the fact that He is God!”

While there is truth to this response, it insufficiently expresses the Kingly authority of Christ; so much so that failing to expound further upon the topic would invite further misunderstanding.

At this, let’s return to the all-too-forgotten doctrine expressed by Pope Pius XI in Quas Primas as he sheds greater light on what it means to say “All power was given Him in heaven and on earth.”

But if we ponder this matter more deeply, we cannot but see that the title and the power of King belongs to Christ as man in the strict and proper sense too. For it is only as man that he may be said to have received from the Father “power and glory and a kingdom,” since the Word of God, as consubstantial with the Father, has all things in common with him, and therefore has necessarily supreme and absolute dominion over all things created. (Quas Primas 7)

Do not gloss over this!

The Holy Father Pius XI is explaining to us that Divine authority belongs to Jesus Christ, not only by virtue of His being “true God,” but every bit as much to Him as “true man.”

This authority was truly “given” to Jesus “as man” by His Father; this having been merited by His passion, death and resurrection.

Apart from acknowledging and embracing this sublime truth, “the title and the power of King” in reference to Jesus means nothing; “Christ the King” is thus rendered but an empty honorific.

What remains, as I said, is little more than a mere man – an itinerant first century doer of good deeds; a live-and-let-live liberal who judged nothing and no one, only to be left beaten, bloodied and belittled by the powerful of this world.

This is the Jesus preached by Francis; a false Christ whose kingdom and “authority” is entirely “of this world;” a Jesus who never passed Himself off like a prince: He was always the servant of all, and this is what gave Him authority.

Perhaps this is why Francis has no compunction about twisting Our Lord’s plainly spoken words concerning marriage, divorce and adultery to suite his own agenda.

You see, if indeed Jesus was but a man, and service – understood as solicitousness for the temporal needs of the hungry, the sick and the suffering – is what gave Him the authority to proclaim such things some 2,000 years ago, those who likewise demonstrate compassion for humankind in our day have just as much authority to proclaim whatever they happen to see fit.

In any case, in spite of the seriousness of the situation, I nearly had to laugh when I read:

This coming from a “pope” who refuses to answer five simple questions about basic Catholic doctrine.

You can’t make this stuff up, folks.

Over the last several months I’ve taken heat for stating what appears obvious to me concerning Francis.

No worries. I expected as much.

One thing we can all agree upon, however, is that Jorge Bergoglio, true pope or not, is the Vicar of a false Christ.

BREAKING: No ‘formal correction’ of Francis to come?