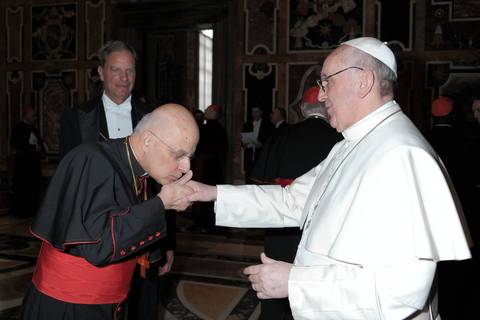 A number of friends have been applauding a recent article by Cardinal Francis George entitled, “A tale of two churches;” echoing the review given by Fr. Z who said, “His Eminence knocks this one over the fence.”

With all due respect, this article looks a whole lot more like a pop up to me.

Like so many other American “conservatives” in the Church today, Cardinal George is good at bemoaning symptoms, but remarkably inept at identifying the underlying disease.

About 1,800 years into her often stormy history, this church found herself as a very small group in a new country in Eastern North America that promised to respect all religions because the State would not be confessional; it would not try to play the role of a religion … The social history was often contentious, but the State basically kept its promise to protect all religions and not become a rival to them, a fake church. Until recent years.

Here, Cardinal George is holding up an X-ray of the American experiment; playing both doctor and historian,  and even with the benefit of hindsight, knowing full well that the patient is on the doorstep of death, still he does not seem to recognize the fatal affliction there present.

Those who view such things by the light of tradition, however, know very well that the State that promises to “protect all religions,” including those that oppose the reign of Christ the King, is already, even at its very inception, an avowed rival (read, enemy) of the Holy Catholic Church.

In the present case, the only unknown that ever truly existed according to the mind of the Church, properly understood, concerned the precise manner and time of her open persecution.

All of this said, Cardinal George isn’t totally blind.

There was always a quasi-religious element in the public creed of the country. It lived off the myth of human progress, which had little place for dependence on divine providence. It tended to exploit the religiosity of the ordinary people by using religious language to co-opt them into the purposes of the ruling class. Forms of anti-Catholicism were part of its social DNA.

At this, one might reasonably ask: Why is a prelate who seems to sense in his gut the irreconcilability of the American ideal and the mission of a Church that is “the kingdom of Christ on earth, destined to be spread among all men and all nations” (Pius XI – Quas Primas), still cannot bring himself to do any more than to lay blame for the present state of affairs at the feet of “some members of the American establishment?”

The answer is simple; Cardinal George suffers, as do all so-called “conservative” Catholics, from conciliar myopia. Let me explain…

The U.S. Constitutional approach to religious freedom wherein the State is obliged to treat the true religion as merely an equal to the many false religions of the world, the same proposition having been firmly condemned by Holy Church in no uncertain terms throughout the centuries, was adopted by the Second Vatican Council as enshrined in the document Dignitatis Humanae.

And what have we to show for it today?

Not only do we have an American State that plainly operates as a “fake church” all its own, we also happen to have a Roman Pontiff who, as the Generalissimo of the conciliar revolution, is pleased to take the lead in behaving as if all religions are mere equals!

As such, ours is a Church overpopulated with undernourished Catholics, both lay and ordained, who can’t quite seem to get their hands around the fact that the Second Vatican Council effectively abandoned the mission of the Church in exchange for a form of religious diplomacy that has only served to hasten her persecution.

So you see, unless and until Cardinal George is willing to rebuke both the disastrous propositions set forth on religious liberty at Vatican Council II, as well as the words and deeds of Pope Francis who embodies them in all their humanistic glory, even to the point of encouraging those who oppose the mission of the Holy Catholic Church to persist in their false religions, he will ever be relegated to just another easy out.

In other words, don’t look for any home runs from Cardinal George, or anyone else who steadfastly marches under the “conservative” Catholic banner, any time soon.

SSPX: Conciliar Catechism is “teaching of the Church”