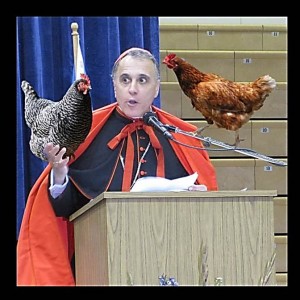 On May 28, 2013, self-identified “Bishop” Janice R. Huie of the United Methodist self-proclaimed “Church” presided (a proper use of the word) over a rite of commissioning and so-called “ordination” involving some fellow heretics.

This is nothing new, of course. Protestants have been engaged in fake-believe ceremonial mockeries of the sacraments instituted by Christ for many centuries.

What made this particular dog and pony show noteworthy is that it took place with the permission of Cardinal Daniel DiNardo in the Cathedral of the Sacred Heart in Houston.

When questioned about the wisdom of allowing the abortion-supporting sect to carry out a mock ordination in the shadow of the Cathedral’s altar, Cardinal DiNardo reportedly defended his decision, saying that it was an act of “ecumenical hospitality.”

When news of the spectacle spread via Catholic blogs and social media, many faithful Catholics reacted with utter disbelief that a prelate – a Cardinal no less – would so cavalierly invite grave scandal upon the very same faithful that he is charged with shepherding.

I, on the other hand, wasn’t surprised in the least. 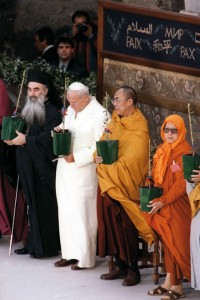 You see, as I went about digesting the unsavory images depicting the bitter reality of what had taken place at the Cathedral in Houston, exponentially more horrifying images flooded my mind; namely, those of Pope John Paul II and the unthinkable scene that unfolded in the Basilica of St. Francis of Assisi in Italy, not once, but twice, in both 1986 and 2002.

In what was billed as a World Day Prayer for Peace, the Vicar of Jesus Christ, the same who established but one Church and charged it with the mission of teaching the nations to observe everything whatsoever that He commanded, was gathered together in “prayer” with heathens, heretics, pagans and humanists before the altar of the Lord Most High, in what he too presumably considered to be a supreme act of ecumenical hospitality.

Within moments, images of his successor, Pope Benedict XVI, came to mind. 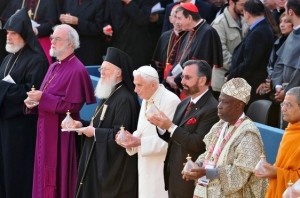 Not to be outdone, he who would eventually abdicate hosted a similar gathering, one that included witch doctors and atheists, in his own World Day Prayer for Peace at the Basilica in Assisi in 2011. In the pope’s own words, the purpose was “to solemnly renew the commitment of believers of every religion to live their own religious faith as a service to the cause of peace,” giving both believer and unbeliever alike the distinct impression that the Roman Pontiff intended to teach the world that the practice of just any ol’ religion, or no religion at all, is an acceptable avenue toward upholding the common good.

With this bit of perspective established, it was clear to me then, and is clear to me now, that what happened at the Cathedral of the Sacred Heart in Houston several weeks ago, as deplorable as it was, is really best understood as little more than the chickens of Assisi coming home to roost.