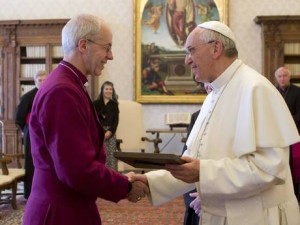 Vatican Radio provided a full transcript of the Holy Father’s address, and it is one that the overwhelming majority of Catholics will consider of little note, being nothing more than the boilerplate religious diplomacy that has so characterized the ecumenical movement of the last 40+ years.

Even so, the words spoken this day by Pope Francis to Justin Welby, in spite of their congruence with what many now consider the “new normal” in the Church’s relationship with heretical sects, are plainly incompatible with authentic Catholic thought concerning the matter of ecumenism as understood by every Roman Pontiff prior to Vatican II.

Pope Francis began his address by providing the practical definition of what passes for “continuity” in the minds of modern day ecumenists by quoting Pope Paul VI:

On the happy occasion of our first meeting, I make my own the words of Pope Paul VI, when he addressed Archbishop Michael Ramsey during his historic visit in 1966: “Your steps have not brought you to a foreign dwelling … we are pleased to open the doors to you, and with the doors, our heart, pleased and honoured as we are … to welcome you ‘not as a guest or a stranger, but as a fellow citizen of the Saints and the Family of God.’”

Ever since these words were first spoken by Pope Francis’ Venerable predecessor, heretics everywhere have been wondering, either openly or subconsciously, why, given that the pope himself has declared all self-described Christians to be “fellow citizens” in the “Family of God,” would anyone comfortable in whatever sect they happen to call home, ever bother converting to the Holy Roman Catholic Church?

It’s a valid question, one that the popes until recent decades didn’t hesitate to answer with clarity, letting it be known that the Catholic Church alone possesses the fullness of those gifts that Jesus Christ wills for all, including unity.

Pope Pius XI, for example, in his 1926 Encyclical, Mortalium Animos, said, “…unity can only arise from one teaching authority, one law of belief, one Christian Faith … There is but one way in which the unity of Christians may be fostered, and that is by fostering the return to the one true Church of Christ of those who are separated from it.”

The Instruction from the Holy Office on the Ecumenical Movement, issued under Pope Pius XII, further underscored the singular path to unity among those who wish to follow Christ, saying, “True reunion can only come about by the return of dissidents to the one true Church of Christ”

As such, it should be obvious why Pope Benedict XV, whose reign immediately preceded that of Pius XI, said that although we desire for all Christians to be gathered in one fold under one shepherd, the Catholic Church cannot join with others in what is considered a “search” for unity. Why? Because the Catholic Church is already one, and so she must not give the appearance of searching for a unity that she already possesses.

In short, to speak of the Catholic Church as though she, like the heretical sects, is searching for an elusive unity, would be to give the false impression, to those both within the fold and those without, that we await an as yet unknown church, one that we must grow toward, as though the Church herself is evolving into an ever more perfect society, the likes of which one can only imagine.

Speaking in such ways is to undermine the very mission of the Church from within, as she is already a perfect society.  Pope Leo XIII, for instance, said of the Catholic Church:

“This society is made up of men, just as civil society is, and yet is supernatural and spiritual, on account of the end for which it was founded, and of the means by which it aims at attaining that end. Hence, it is distinguished and differs from civil society, and, what is of highest moment, it is a society chartered as of right divine, perfect in its nature and in its title, to possess in itself and by itself, through the will and loving kindness of its Founder, all needful provision for its maintenance and action.”  (Immortale Dei)

Today is a new day in the Church, however, one in which the Roman Pontiffs speak in the manner of a confused young adult in search of his own identity. Don’t get me wrong, the Church is ever the same, it’s just that many of her post-conciliar members, even to the highest offices, have apparently forgotten who we are.

Pope Francis’ address to Justin Welby faithfully followed the template provided by the Vatican II document, Unitatis Redintegratio, the Decree on Ecumenism, issuing precisely zero calls to conversion and yet numerous suggestions of a joint search for unity.

Today’s meeting is an opportunity to remind ourselves that the search for unity among Christians is prompted not by practical considerations, but by the will of the Lord Jesus Christ himself, who made us his brothers and sisters, children of the One Father. Hence the prayer that we make today is of fundamental importance. This prayer gives a fresh impulse to our daily efforts to grow towards unity, which are concretely expressed in our cooperation in various areas of daily life …

The unity we so earnestly long for is a gift that comes from above and it is rooted in our communion of love with the Father, the Son and the Holy Spirit. As Christ himself promised, “where two or three are gathered in my name, there am I in the midst of them” (Mt 18:20). Let us travel the path towards unity, fraternally united in charity and with Jesus Christ as our constant point of reference. In our worship of Jesus Christ we will find the foundation and raison d’être of our journey. May the merciful Father hear and grant the prayers that we make to him together. Let us place all our hope in him who “is able to do far more abundantly than all that we ask or think” (Eph 3:20).

An ecclesial identity crisis if ever there was one.

Sedevacantism and Theology of the Church