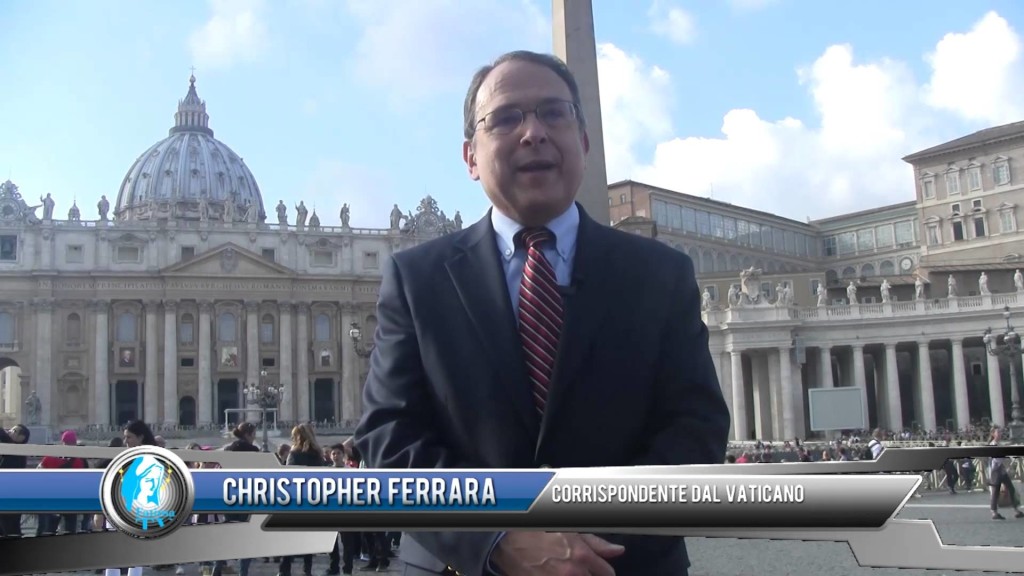 Yesterday, a kind reader sent me a brief note saying that Christopher Ferrara had posted a direct response to some of the criticism leveled on these pages against the Fatima Center’s recent behavior.

That’s great, I thought, maybe he will offer a meaningful rebuttal or explanation!

Boy was I disappointed.

What I discovered instead was nothing more than an ad hominem attack against some unnamed “grandstanding Catholic blogger.”

While some readers are convinced that the mystery blogger is me; I’m not so sure.

You see, Mr. Ferrara is complaining about “personal blogsites dedicated to the daily or periodic musings of the one person who created them.”

akaCatholic, by contrast, has multiple contributors; including Cornelia Ferreira, who has been rather vocal in her defense of both the Fatima message and the legacy of Fr. Gruner.

In any case, just for the sake of argument, let’s assume that his target is akaCatholic and, in particular, yours truly.

The most disappointing thing about Mr. Ferrara’s post isn’t that he declined to address even one of the entirely valid observations put forth by Cornelia and I in this space, but rather that he presumed to suggest that he has intimate knowledge of my intentions.

Even more disappointing is that he saw fit to declare that my intentions amount to nothing more than an entirely self-serving quest for “attention” and web “traffic.”

This is to laugh!

The approach that I’ve taken here over the years has cost me my job, speaking opportunities, readers, supporters, and (obviously based on the tenor of Mr. Ferrara’s invective alone) friendships.

I’ll be the first to admit that my behavior is far from perfect, but anyone who takes the time to go back and reread my posts on the Fatima Center’s recent activities will find a deliberate attempt on my part to focus on arguments and approaches; not the interior disposition or intentions of those who disagree with me.

For example, here are just a few direct quotes taken from my recent posts on the topic:

At this, I will address the closest thing to substance to be found in Mr. Ferrara’s post:

The Fatima Center has done more than any organization in the world to keep alive the integral message of Fatima.

Indeed it has! If the Fatima Center was simply a flash-in-the-pan outfit with neither influence nor reach, we wouldn’t be having this conversation.

The question presently at hand (and we are not the only ones asking it), however, concerns what the Fatima Center is doing today – in the aftermath of Fr. Gruner’s and John Vennari’s passing – to protect the “integral message of Fatima” from corruption.

None of that has changed with the passing of Father Gruner in April 2015. His legacy lives on without compromise, as any objective observer can see from the work of the apostolate over the past two years.

No doubt, the Fatima Center continues to be engaged in any number of good and praiseworthy works. Mr. Ferrara himself continues to write outstanding commentary on a range of important topics.

That said, we must be mindful of the impact that “a little leaven” can have; not just on the efforts of an organization, but on the salvation of souls, which, at the end of the day, is Our Lady’s primary concern.

Specifically, does anyone even remotely familiar with Fr. Gruner’s work really believe that the Fatima Center, on his watch, would ever heap unqualified praise on a popular (nay, celebrity) cardinal who threatens to mislead the innocent by publicly insisting upon the authenticity of a fake letter attributed to Sr. Lucia stating that the consecration of Russia “has been done just as Our Lady asked, on 25 March 1984”?

Of course not, and the reason is obvious and simple:

Claims such as these not only lead the innocent astray, they also make of Our Lady a liar for not having delivered the conversion of Russia and the period of peace that she promised in return, and this in spite of the consecration having allegedly been done over three decades ago.

At this, it may be useful to recall precisely what Cardinal Burke originally said; thus eliciting a giddy reaction from otherwise thoughtful men, and apparently rendering even his most egregious errors and offenses immune from any criticism:

What exactly is this “once again” nonsense?

It is a concept taken from a truly shameful homily given in 1982 by Pope John Paul II in Fatima wherein he attempted to dictate to Our Lady; even going so far as to suggest that the consecration was already done by Pope Pius XII and she should therefore be satisfied.

Cardinal Burke saw fit to further quote this homily of John Paul II, who said of the consecration he was about to undertake:

Once more this act is being done. Mary’s appeal is not for just once. Her appeal must be taken up by generation after generation, in accordance with the ever new “signs of the times”. It must be unceasingly returned to. It must ever be taken up anew. [Emphasis in original]

Yes, but Cardinal Burke called for the consecration to be done “in accord with her explicit instruction.”

Cardinal Burke is obviously confused; either the consecration has “been done just as Our Lady asked,” or it hasn’t; i.e., he can’t have it both ways – unless, of course, her “appeal is not just for once.”

If it has already been done “just as Our Lady asked” – and Cardinal Burke vigorously contended as much in his most recent interview – then where is Russia’s conversion? Where is the period of peace? Why is the crisis in the Church worse now than ever?

It is a monumental insult to Fr. Gruner and an assault on his memory to suggest that he would have applauded Cardinal Burke for his disjointed, irreconcilable, and ultimately insulting (to Our Lady!) comments.

Obviously, something has changed at the Fatima Center, and drastically so.

As any objective observer can see (to borrow Mr. Ferrara’s phraseology) it was not that long ago, when Fr. Gruner was at the helm, that Mr. Ferrara sang a very different tune than the one he is singing today.

Back then, he went to great lengths, and admirably so, to reprove those who played fast and loose with the truth about the consecration by claiming that it has already been done.

Back then, he never would have stood silent in the face of a popular cardinal who attempted to portray Vatican Council II, the New Evangelization and the behavior of John Paul the Great Ecumenist as consonant with Our Lady’s message.

Back then, he would have masterfully dismantled any foolish suggestion that Our Lady failed to make good on her promises even though the pope had allegedly done just what she asked.

Today, however, when Cardinal Burke does all of this, the best Mr. Ferrara can do in defense of “the integral message of Fatima” is to applaud the man for his “courageous declarations” and his “intellectual honesty.”

And then to top it all off, he then goes about leveling personal attacks against those who dare to insist upon the integrity of Our Lady and her entire message.

Yes, my friends, something has changed, but apparently the brain trust of the new Fatima Center doesn’t think that its donors and supporters are intelligent enough to recognize compromise when they see it.

Some, I suppose, will choose to deny it. Old heroes die hard, and to some extent, I get it. I too am bitterly disappointed to see people that I’ve long admired (and still do in some ways) falter. We must pray for them to regain their bearings.

In the meantime, the truth is the truth, and it must be told; no matter how unpopular it may be.

As always, your comments are welcome, but please begin with the assumption that Mr. Ferrara is sincere in his attempts to serve the Church and Our Lady, as I continue to believe that he is, in spite of any recent missteps.