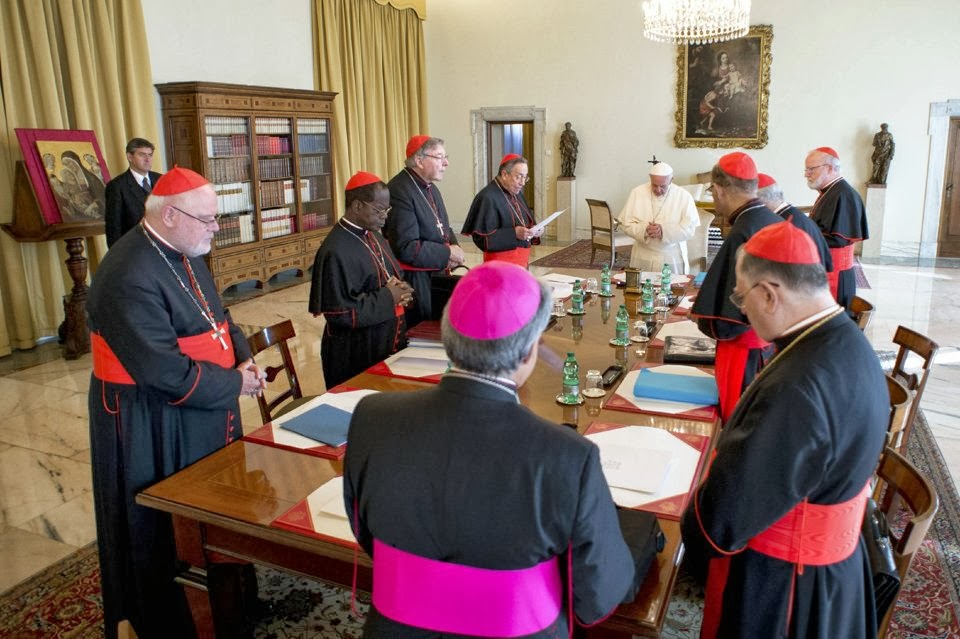 On the heels of this week’s statement issued by the Council of Cardinals (C9) pledging its support for Francis, comes the following:

In relation to recent events, aka Catholic expresses its full support for the work of salvation as given to the Holy Catholic Church by Christ, assuring at the same time its full adhesion to immutable doctrine and backing for all who likewise honor the authentic Magisterium of the Church, while steadfastly opposing those who do not.

Certain segments of Catholic social media are abuzz with outrage over news that a Masonic ceremony is scheduled to take place at Canterbury Cathedral tomorrow, February 18 – the same day that Cardinal Vincent Nichols plans to re-consecrate England and Wales to the Immaculate Heart of Mary in Westminster Cathedral.

Sorry, but I’m having trouble getting worked up over this.

Sure, Canterbury Cathedral has a rich Catholic history and is the burial place of a number of Saints, but it’s also a venue wherein the Holy Sacrifice of the Mass and the Priesthood of Jesus Christ have been openly mocked for centuries on end.

With this in mind, tell me again why I’m supposed to be alarmed over a bunch of idiots in aprons carrying out a ritual inside of what amounts to Heretic Headquarters for the Church of England?

I’m far more concerned about the Masonic invasion of Rome, its humanist bishop-in-white, and the fact that Cardinal Nichols can’t praise him and his Love Letter to Lucifer, Amoris Laetitia, enough.

The canonization cause of Lucia of Fatima

National Catholic Register is reporting that the diocesan phase of the canonization process for Sr. Lucia, after some seven years of full-time work, was officially concluded on Feb. 13.

Vice-postulator for the cause, Sr. Angela Coelho, said of the process :

Each page that Sister Lucia wrote had to be meticulously analyzed and we are talking of a universe of 10,000 letters that we managed to gather and of a diary with 2,000 pages, in addition to other more personal texts.

Now that the diocesan phase is complete, all of the relevant documents are being submitted to the Congregation for the Causes of the Saints in Rome.

“Canonization” such as it is following the New Pentecost is often little more than a propaganda tool shamelessly leveraged with impunity by the Captains of New Church in order to give the appearance of Catholicity to whatever might further their own cause.

With the “canonizations” of John XXIII and John Paul the Great Ecumenist, the intention was to anoint the Council. With the beatification and almost-certain-to-be canonization of Paul VI, the intent will be to do the same for the Novus Ordo.

There can be no doubt whatsoever that the motive for moving forward with the cause of Sr. Lucia is also evil; in this case, to give the appearance of authenticity to the fake letters and bogus interviews of the Fatima seer; all in a futile attempt to silence doubts about Our Lady’s alleged satisfaction with the consecration of Russia that never happened, and to put to rest for good continued speculation about the actual contents of the Third Secret.

For more on the Fatima cover-up campaign, see HERE.

Here in the U.S., leftists are in a perpetual state of outrage over all things Trump; including his Executive Order, Protecting the Nation from Foreign Terrorist Entry into the United States.

According to the Order, the U.S. will temporarily ban immigrants from a number of predominantly Muslim nations, while suspending indefinitely the acceptance of refugees from Syria, at least until such time as a reliable screening process can be put in place.

The reason is obvious enough to thinking persons, but for the benefit of the lobotomized left, the Order spells it out as follows:

And yet, among those who are wailing in protest against the Order the loudest are those whom the Islamic terrorists would most like to attack, self-identified Jews; so much so that even the Jerusalem Post took notice (see HERE.)

At first blush it seems rather odd, but on further reflection it occurs to me that it kind of makes sense for liberal Jews to fawn over the “peaceful Muslim” deception.

Because they’re cut from the same cloth.

A different kind of pledge

I never bothered clicking on the link since it’s obviously a shining example of “fake news.”

I mean, seriously… every liberal male I’ve ever known self-castrated a long time ago.

Official March 25 Text Unprayable: What to do?