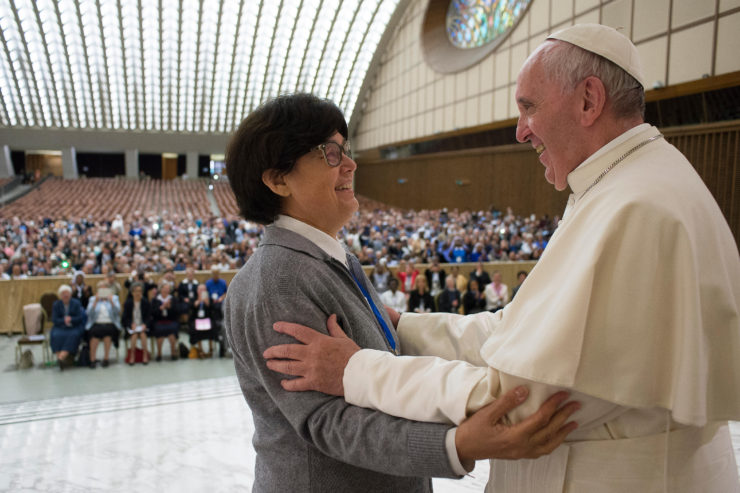 At present, and for good reason, there is a great deal of speculation that Francis is preparing to re-examine the possibility of conferring Holy Orders on women.

There are even rumors coming out of Rome that it has already been decided that the diaconate for women will be a reality as early as November 2017.

Whether or not there is any substance to these prognostications might make for some interesting discussion, but that isn’t the focus of this particular post.

Instead, I’d like to invite readers to engage in a little “thought experiment” concerning female ordination that just might prove useful in lending clarity to the situation with Francis such as it is at this very moment.

“The teaching that the sacrament of holy orders can be conferred only on a baptized male is an infallible teaching of the Catholic faith which has been passed down since the time of Jesus. Of necessity, this has been clearly re-stated in recent documents of the Magisterium.”

So wrote conservative apologist Jimmy Akin; making it clear, at least on this note, that so-called “traditionalists” and the Catholic Answers crowd are in agreement.

Among the recent documents of the Magisterium on this topic is a General Decree regarding the delict of attempted sacred ordination of a woman that was issued by the Congregation for the Doctrine of the Faith in 2007, which reads in part:

“Excommunication latae sententiae” simply means that the offending parties are excommunicated “as soon as the offence is committed and by reason of the offence itself (eo ipso)  without intervention of any ecclesiastical judge.” (cf Catholic Encyclopedia)

What if a pope attempted to introduce the ordination of women into the Church; decreeing that such is henceforth to be considered valid?

As I write today, this hypothetical scenario no longer appears all that far-fetched. Be that as it may, imagine being asked this question five years ago.

How would you have responded then?

Seriously… stop here for a moment and think about it.

I’ve actually had this conversation with any number of Catholic friends; both prior to the Franciscan reign of terror and since.

Generally speaking, three intersecting lines of thought tended to emerge from those conversations such that the consensus conclusion was always essentially the same:

1) Impossible! The Holy Ghost will not allow such a thing!

2) If this was to happen, then we would know without any doubt that this man is really an anti-pope.

3) The pope who attempts to decree female ordination would automatically place himself outside of communion with the Church (i.e., incur excommunication latae sententiae) thus abdicating the papacy.

So, how did you answer?

I can tell you that I had precisely this conversation with a fellow “traditionalist” several months ago concerning Francis, and item #2 above is a near verbatim representation of his position.

The reason we discussed the ordination of women as a hypothetical scenario wasn’t just because Francis had given us reason to believe that he is actually willing to consider it, but rather because it’s just so obvious:

Any “pope” that would attempt to decree female ordination simply cannot be the pope, and what’s more, we wouldn’t need anyone to tell us so!

It may interest you to know that this same friend disagrees with my conclusions concerning Francis given the absence of an official decree announcing to the world that Jorge Bergoglio is not the pope.

Now, back to you…

If you drew the same kinds of conclusions outlined above concerning a pope who just might decree the ordination of women, I have some questions for you:

What exactly is the difference between this hypothetical scenario and the very real decree of Francis stating that adultery isn’t a mortal sin, that the Divine Law is too difficult for some to keep, and that God actually wills that we should persist in adultery?

Is the Church’s teaching that the sacrament of Holy Orders can be conferred only on a baptized male somehow more infallible than the teachings that are contravened in Amoris Laetitia?

Is there anything an alleged “pope” can do to reveal himself as an imposter (i.e., an anti-pope) that is clearly discernible to the well-formed Catholic even without an official proclamation of the “proper authorities”?

At this I will leave you to ruminate in relative peace.

On the First Anniversary of the Voris/Jones Affair