Home
Blog Post
Blueprint for the City of Man 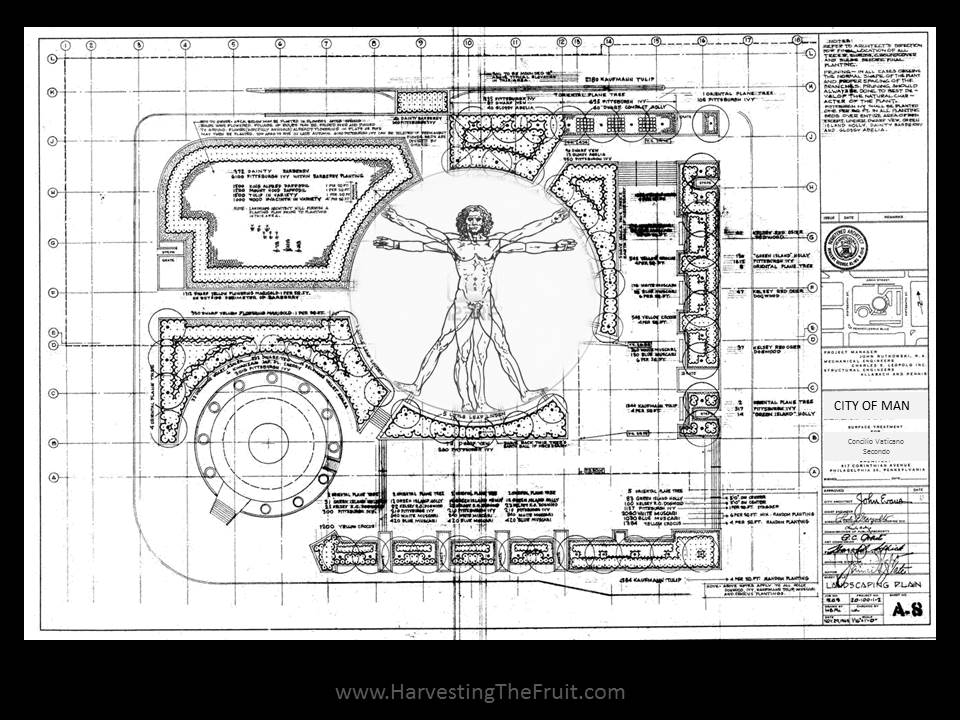 Pope Francis continued his assault against the “Pelagians” of traditional Catholicism (Homily, 17 Oct. 2013), returning to a theme introduced shortly after his elevation when he belittled as “restorationist” those who offered him a spiritual bouquet of Rosaries.

Letting loose against those who recite memorized prayers “like a parrot,” the pope emphasized that “saying prayers” is not the same as “praying.”

The Pharisees, he noted, “these teachers of the law, said many prayers.”

Did the pope really intend to disparage such prayers as the Memorare and the Salve Regina, or was he simply pointing out that the venerable traditional prayers that Catholics so often recite from memory bear increasingly greater spiritual fruit as the purity of one’s intentions also grows?

It’s not immediately clear, but either way, the central point of the homily was to warn against what the Holy Father sees as “a serious illness, this Christian ideology.”

The faith passes, so to speak, through a distiller and becomes ideology. And ideology does not beckon [people]. In ideologies there is not Jesus: in his tenderness, his love, his meekness. And ideologies are rigid, always. Of every sign: rigid. And when a Christian becomes a disciple of the ideology, he has lost the faith: he is no longer a disciple of Jesus, he is a disciple of this attitude of thought… For this reason Jesus said to them: ‘You have taken away the key of knowledge.’ The knowledge of Jesus is transformed into an ideological and also moralistic knowledge, because these close the door with many requirements.

Who are these people that practice a “Christian ideology?” What is this “distiller” of rigidity and moralism of which the pope speaks?

As I suggested upon launching the Defensor Doctrinae project, in order to truly appreciate the gravity of Pope Francis’ intentions, it is necessary to examine similar threads of thought offered elsewhere; ideas that may initially seem disjointed, but once interwoven, form the fabric of his teaching.

Pope St. Pius X encouraged as much in his timeless Encyclical against Modernism:

But since the Modernists (as they are commonly and rightly called) employ a very clever artifice, namely, to present their doctrines without order and systematic arrangement into one whole, scattered and disjointed one from another, so as to appear to be in doubt and uncertainty, while they are in reality firm and steadfast, it will be of advantage, Venerable Brethren, to bring their teachings together here into one group, and to point out the connexion between them, and thus to pass to an examination of the sources of the errors, and to prescribe remedies for averting the evil. (Pascendi Dominici Gregis)

For example, if one revisits the Holy Father’s lengthy interview with Fr. Antonio Spadaro, S.J., the intended message begins to come into sharper focus:

If the Christian is a restorationist, a legalist, if he wants everything clear and safe, then he will find nothing. Tradition and memory of the past must help us to have the courage to open up new areas to God. Those who today always look for disciplinarian solutions, those who long for an exaggerated doctrinal ‘security,’ those who stubbornly try to recover a past that no longer exists — they have a static and inward-directed view of things. In this way, faith becomes an ideology among other ideologies.

While the pope primarily intends to criticize traditionalists, urging them to “open up to new areas,” it is important to recognize that the “serious illness” of which he speaks has, at least in his mind, infected pretty much every devout Catholic, including many of the same neo-con papal defenders who have deluded themselves into thinking that they are safely living in peaceful harmony with Francis’ program.

Is it not entirely normal, and eminently healthy, for every Catholic to desire “doctrinal security” and to long for a Church wherein everything related to the Faith is “clear and safe?” Is this not precisely what one finds in God, and as such, is this not exactly what one should expect from the Church that He established?

According to Pope Francis, the answer is no!

Now, bear in mind, the pope is not saying that we should have no doctrinal security at all; rather, he is saying that such cannot be found in the professions, practices and disciplines of the past (prior to the 1960’s, one presumes), and he goes on to point toward that new “safe harbor” wherein he intends to moor the Barque of St. Peter. (God help us!)

I have a dogmatic certainty: God is in every person’s life. God is in everyone’s life. Even if the life of a person has been a disaster, even if it is destroyed by vices, drugs or anything else — God is in this person’s life. You can, you must try to seek God in every human life. Although the life of a person is a land full of thorns and weeds, there is always a space in which the good seed can grow. You have to trust God.

Let us attempt to decipher what we have so far.

In the past, the pope appears to be saying, one perhaps imagined that he did well to seek God in the sure doctrine of the Catholic Church, wherein one could safely grow in communion with Him. Those who attempt the same today, however, will find not God, but rather will they find “nothing.”

So, if not in the arms of Holy Mother Church, where does the pope imagine the locus of “certainty” to be? In other words, where shall we seek the one true God?

In other human beings!

This forms an essential plank in the credo of the church-of-man, and it should, by now, sound familiar.

Remember, this is the same pope who told the atheist Eugenio Scalfari, “The Son of God became incarnate to infuse into the souls of men a feeling of brotherhood.”  If that isn’t anthropocentric enough, he also said that the most urgent problem facing the Church, and the world, is youth unemployment and the loneliness of the old. (And yet, remarkably, he accuses traditional Catholics of behaving as ideologues.)

What then of doctrinal security? Did it ever really exist, or were previous generations of Catholics, over the course of some 1900 years, simply fooling themselves?

All indications seem to suggest that Pope Francis believes that Catholic doctrine is to some extent malleable and must be adapted to humankind, not vice versa. Likewise, he seems to believe that Church teaching does not form the man; rather, the man forms, if not the teaching itself, the way in which it is formulated, even to the point of creating something new.

Speaking to Fr. Spadaro, he said:

When does a formulation of thought cease to be valid? When it loses sight of the human or even when it is afraid of the human or deluded about itself … The thinking of the Church must recover genius and better understand how human beings understand themselves today, in order to develop and deepen the Church’s teaching.

The unavoidable conclusion is that Pope Francis imagines that the doctrinal formulae once considered nurturing for the soul are undeserving of our firm faith today as they have become like poison simply with the passage of time.

In June, L’Osservatore Romano reported on a related reflection given by the pope.

They are today’s Pelagians who believe in the firmness of faith and are convinced that “salvation is the way I do things.” “I must do them seriously,” without any joy. The Pope commented, “they are very numerous. They are not Christians. They disguise themselves as Christians.”

Compare this warning against “the firmness of faith” with the words of Pope Pius XI:

Now, certainly in these days when so many impediments and obstacles are raised against the true sense of Christ, and the supernatural spirit, wherein alone our holy religion consists; when Naturalism, which weakens the firmness of faith, and quenches the flames of Christian charity, holds dominion far and wide; it is of the greatest importance that a man should withdraw himself from that bewitching of vanity which obscureth good things and hide himself in that blessed secrecy, where, cultured by heavenly teaching, he may form a just estimate, and understand the value of human life devoted to the service of God alone… (Encyclical, Mens Nostra, 1929)

According to Pius XI, “firmness of faith” is precisely what we need in order to have a proper understanding man’s value relative to the God to whom our service is due. Apart from it, he suggests, one is apt to overestimating the value of humankind, serving man instead of God.

If that isn’t striking enough, consider the following:

With faith comes a new reliability, a new firmness, which God alone can give. If the man of faith finds support in the God of fidelity, the God who is Amen (cf. Is 65:16), and thus becomes firm himself, we can now also say that firmness of faith marks the city which God is preparing for mankind.

And from where does the above treatment come?

From the first Encyclical Letter of the Supreme Pontiff Francis, Lumen Fidei! I think it’s rather safe to assume that these are the words of his predecessor. In any case, consider the implications: If the firmness of faith leads to the City of God, where does he who condemns it intend to go?

As much as one may wish to deny it, the picture that emerges when weaving together the pope’s numerous threads of thought is a rather stunning one; it forms nothing less than a blueprint for the City of Man, and it should strike holy terror in the hearts of the faithful.

We live in historic times. In an unprecedented way, the Church of Christ the King is under attack at the hands of those who wish to supplant her with the church-of-man.

No, Pope Francis didn’t initiate that battle within the Church; rather, it began in earnest on October 11, 1962, and apart from the boldness with which the devastation of Holy Mass was enacted shortly thereafter, the plan has been carried out with subtly and great nuance by the popes ever since.

Diocese of Pittsburgh gives up on search for Baptist communications director

POLL: Your thoughts on Benedict’s resignation